Skip to content
This is the 8th of 13 daily blog posts covering my World Series scorecards. Every day a new blog post in the series will be posted. 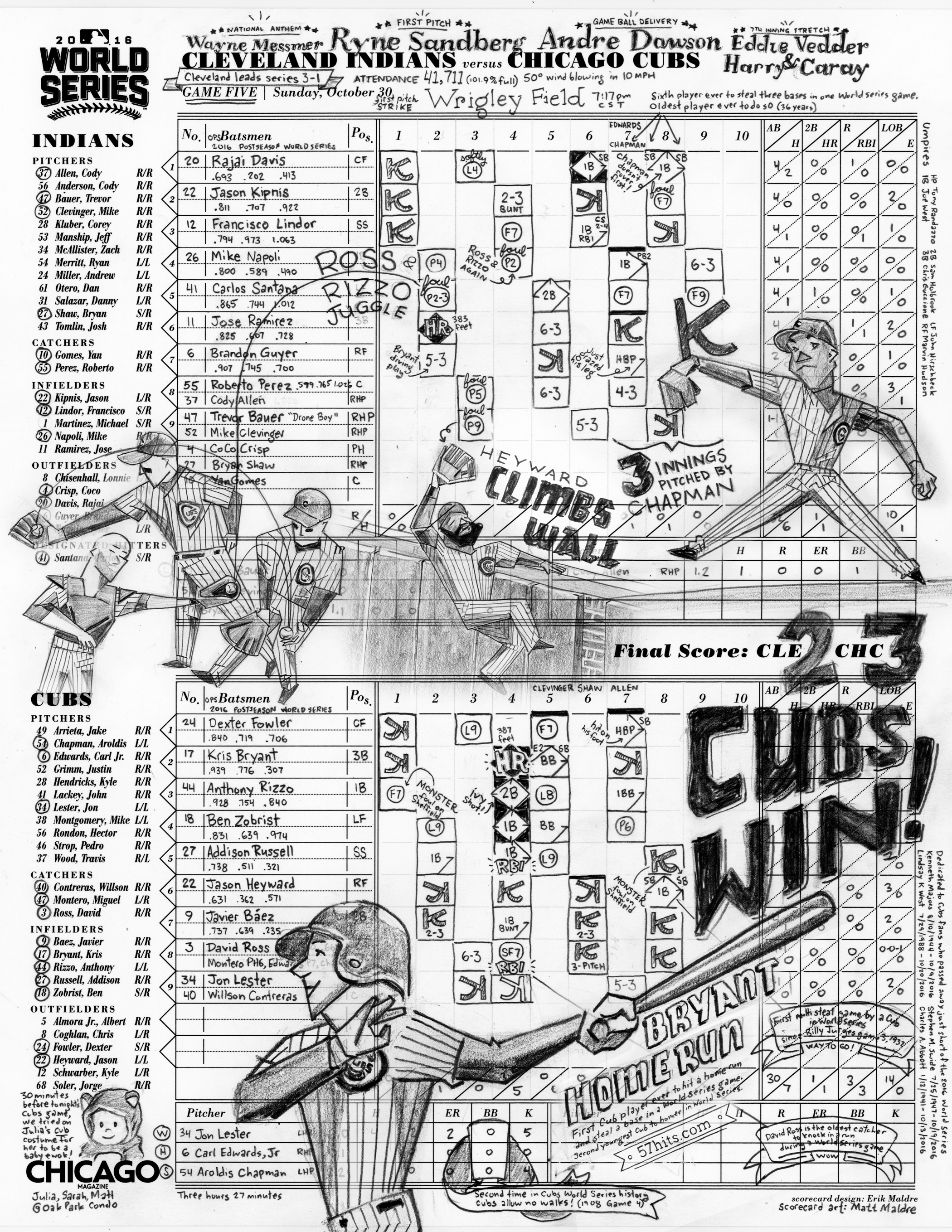 Fun to draw for a win

It’s rather funny how doing public scorecards changes your perception of the game. You want the win, not just for the win; but because a win usually comes with some good events to highlight. A home run, maybe. Or some stellar defense.

Doing a scorecard when your team doesn’t do anything especially spectacular is a bit challenging. Although I should remember what it’s like to do a scorecard just for myself during the regular season. This is the World Series. You can always find at least one record being set in the game.

During the regular season, if there was even the tiniest of records set, you know that would become the focus of the card. And now with these World Series cards, I’m overflowing in trivia.

Game five was such an incredible game with so many moments to illustrate.

With the illustrations on this card, I developed a new style using straight lines on a angle.

Scorecards have lots of lines in a grid. And then within the grid we write in angled lines for any hits. The angled lines in these illustrations mimic the lines written on a scorecard. This style all started with the Kris Bryant illustration. You actually can’t see the full illustration on the scorecard, because I cropped it off. While sketching Bryant swinging, I noticed many continuous straight lines throughout the forms in his body. I figured I’d roll with the straight lines to simplify the process of drawing these illustrations. (Photo reference from USA TODAY Sports, Jerry Lai) 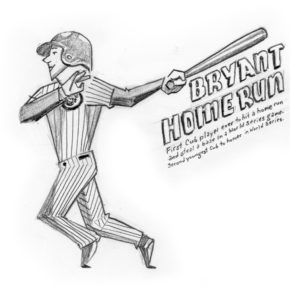 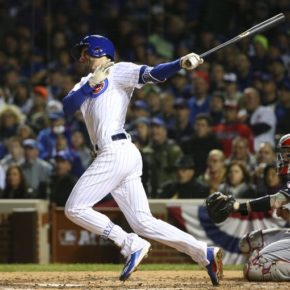 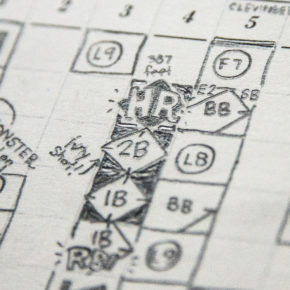 Up to his second at bat in the game five, Bryant was 1-for-16 in the World Series with just a single. After that at bat, Bryant hit 6-for-12. That at bat not only turned Bryant around, it turned the entire Cubs team around. On my scorecard, you can see all the black filled-in squares after Bryant’s home run. That’s one of the great things about a scorecard, you can quickly visualize the turning points in a game. After Bryant’s home run, the Cubs hit a double, single, and a single. Then another single, and a sacrifice fly.

And by the way, Bryant’s home run had the second most impact of all nine home runs hit in the 2016 World Series.

One of my favs

One of my favorite illustrations from the entire series is the next illustration I did of Jason Hayward climbing the outfield wall (photo reference from Brian Cassella, Chicago Tribune). The angular Cubist style has a great fit with the shapes of this subject. The flat angled wall, with Hayward’s arm laying across it. His body leaning backwards, head titled up. Even his legs bending up—everything had such an interesting volume that worked with the lines. 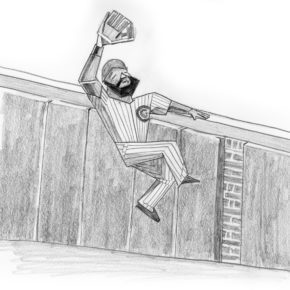 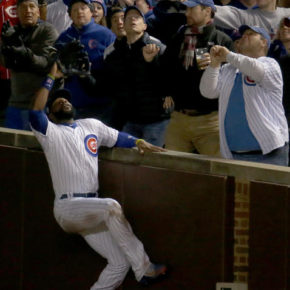 You knew game 5 was off to a good start when Jon Lester struck out the first three batters in a row. Then in the second inning David Ross and Anthony Rizzo performed a spectacular team catch in foul territory. Carlos Santana hit a high pop foul that bounced out of David Ross’ hands, then bounced out of Rizzo’s hands, Ross flipped upside down, and finally Rizzo caught the ball. This incredible catch showed good fortune turning to the Cubs side. 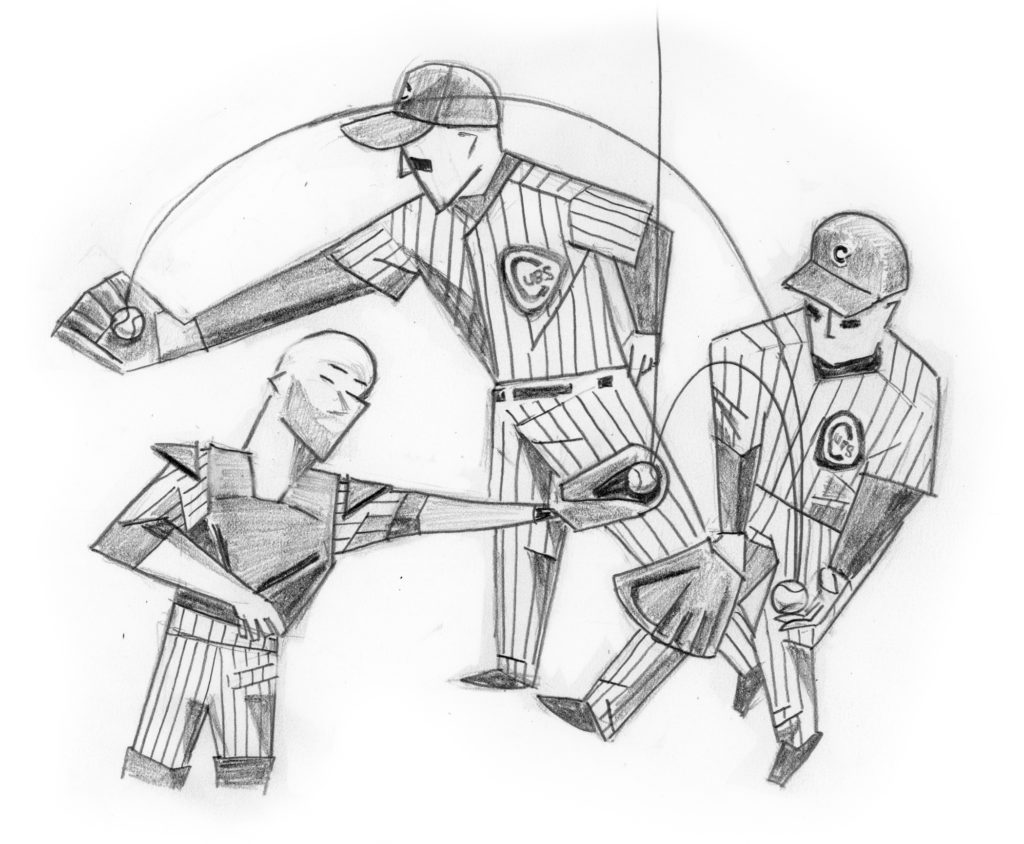 An indirect influence on the cubist nature of these drawings might have come from my smudge sheet. Wait–what’s a smudge sheet? I fill out a detailed scorecard over the course of a three-hour baseball game, and then I burn additional six hours with post-game details. In total one sheet of paper is worked for nine hours straight. The sheet starts to get full of graphite which can easily smudge as my hand touches the sheet. I place a sheet of paper on top of the scorecard to prevent my hand from smudging the already-existing text and drawings. 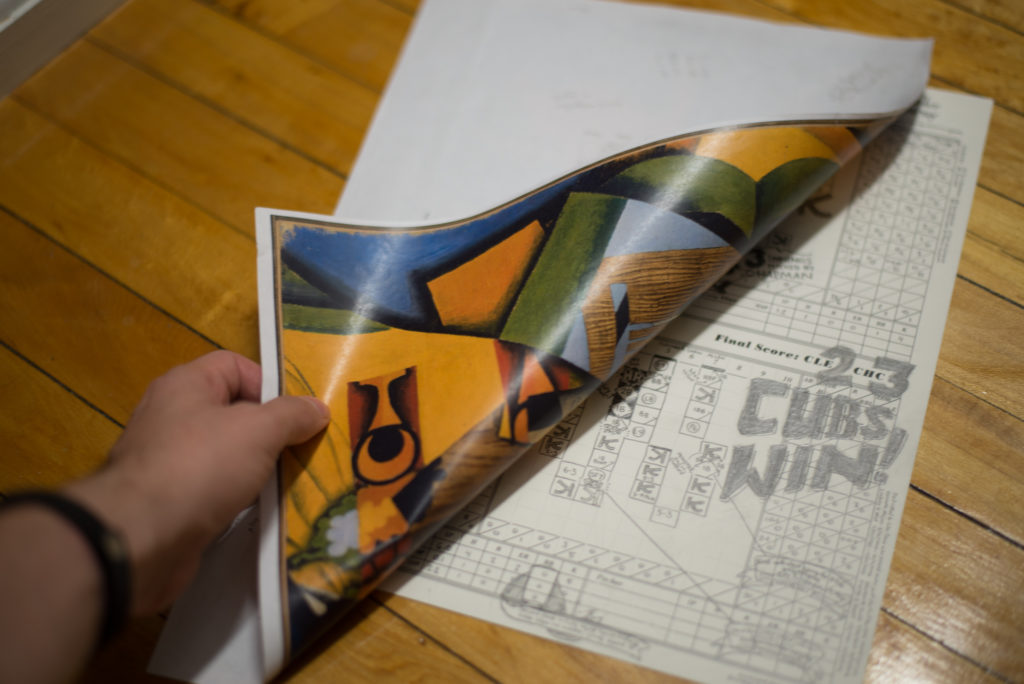 I could use a blank sheet of paper, but I found that putting raw paper on top of a drawing will cause the drawing to smudge. The teeth of a raw sheet of paper is enough to smudge a drawing underneath. My smear sheet needs to have a surface that will not rub against the drawing.

A printout with solid color from a laser printer forms a nice smooth non-smearing surface. Just try drawing with a pencil on top of a color laser printout. You’ll find that the pencil marks don’t grab onto the surface. The color toner forms a sort of seal on the paper that prevent pencil from adhering. Thus, a color printout makes for a great smudge sheet! 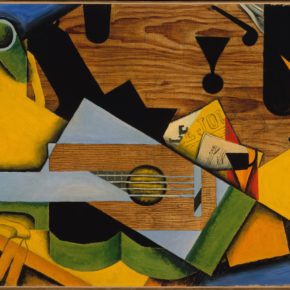 Just face the printed side of the paper face-down on the surface you are using, and it won’t smudge as much.

The printed paper I used throughout the 2016 World Series was a print of a Juan Gris painting, “Still Life with a Guitar” from 1913 (the image is available in the public domain via The Metropolitan Museum of Art’s website). Within the first week of my daughter’s birth, I photographed her on top of prints of artwork from famous artists, including this one. It’s a really cute series. Tiny baby on top of paintings by famous artists.

Thus, I have prints of artwork sitting around. I initially used this one, because it had lots of heavy toner coverage–just what is needed for a smudge sheet. At the time when I picked this particular print, I thought about how cool it would be if the cubist style somehow had an influence on how I drew the scorecards. Heh. Lo and behold, it did!

Joe Maddon ripped a page out of the Indians manager’s playbook by having the Cubs closer come into the game at the 7th inning. Terry Francona often likes to have pitcher Andrew Miller come in the middle of the game to break the spirit of the opposing team.

Throughout Aroldis Chapman’s career he’s always been just a 9th inning pitcher. Of his 398 career appearances, he’s worked one inning or less 363 times. The longest outing he ever went was 2.1 innings. He only went 2 innings 14 times. That’s 3% of his appearances. 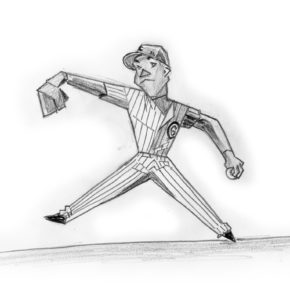 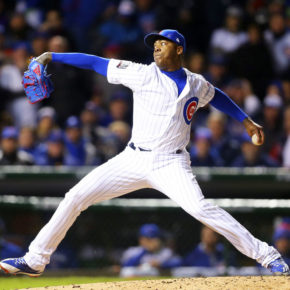 With the Cubs up by only one run, Aroldis Chapman entered the game in the 7th inning with one out. (photo reference USA TODAY Sports, Dennis Wierbicki). Then he pitched again for the entire 8th inning. And he even pitched the entire ninth inning. Everyone was shocked. He threw major heat during all those innings. 19 of his 42 pitchers were over 100 MPH.

It’s been great fun filling out these scorecards. Normally I just do one scorecard a year for my annual trip to Wrigley (sometimes two trips). I’ve never done a consecutive back-to-back-to-back series of games. It’s interesting to develop the style of the cards. For instance, the angular style in this game 5 card is totally new for me.

For game six, I continued this angular illustration style, and incorporated some typography that enhances this look. 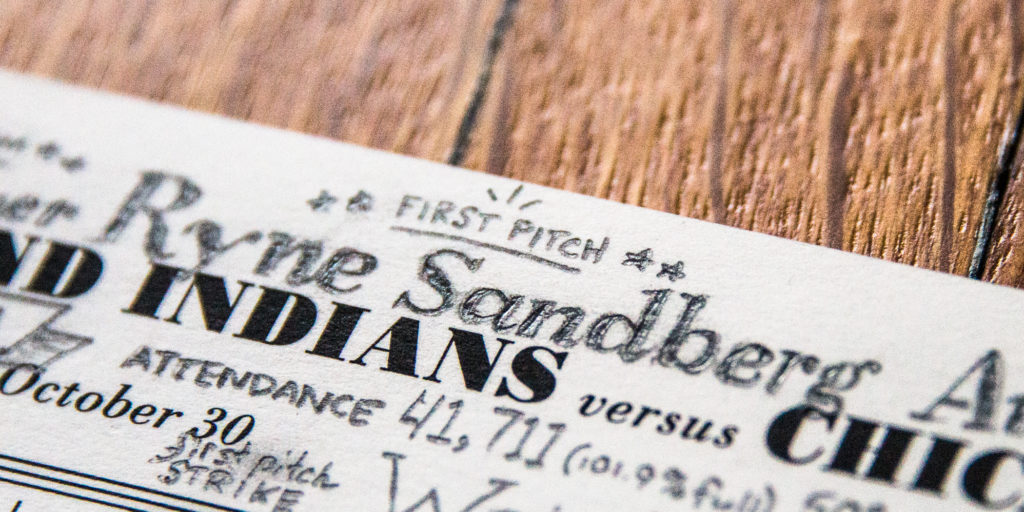 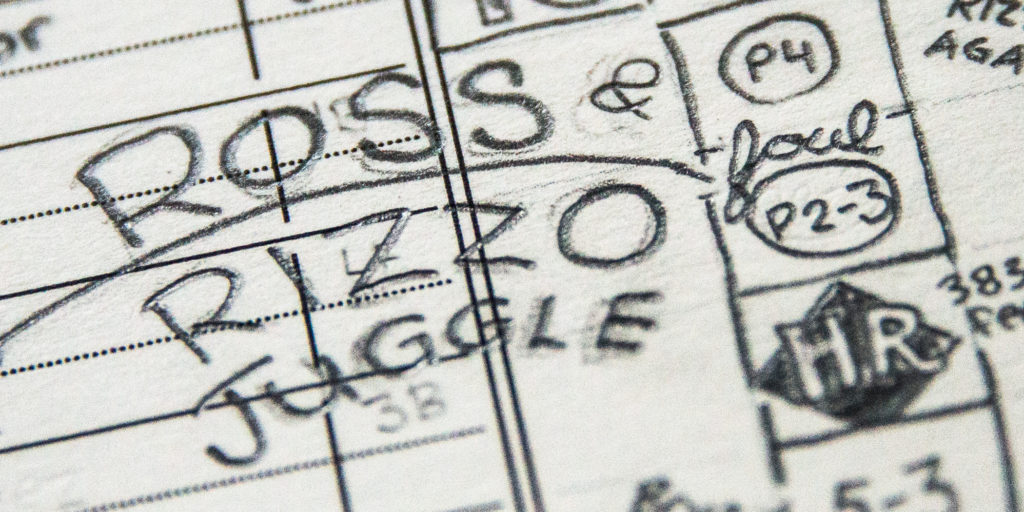 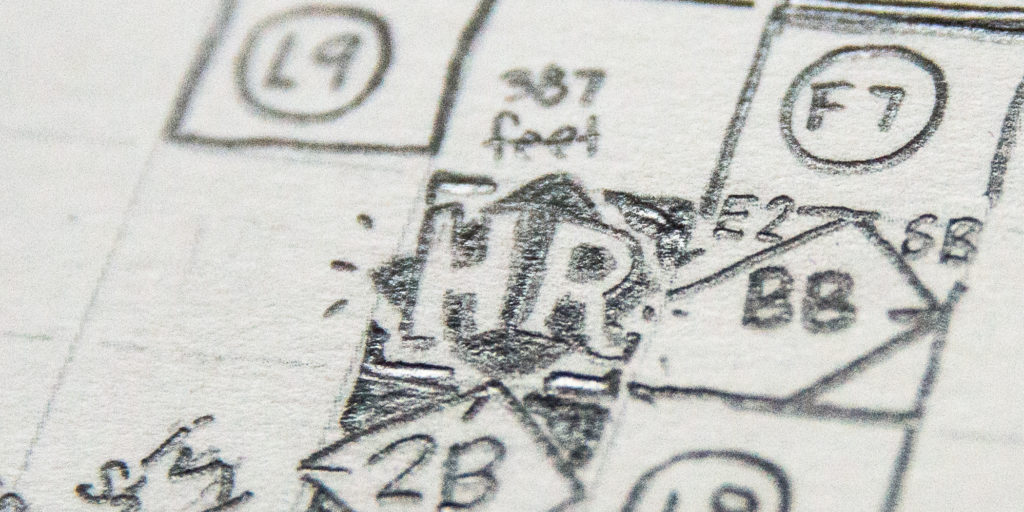 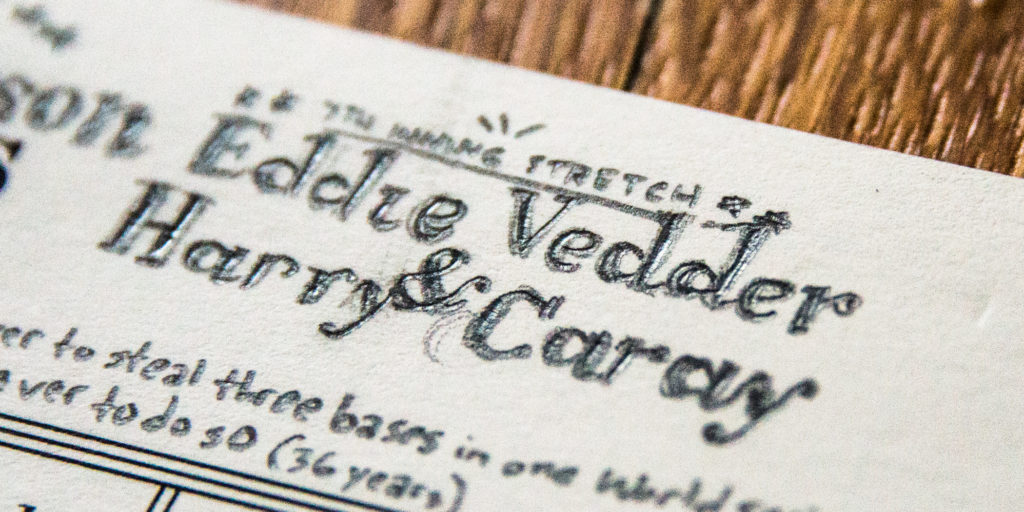 30 minutes before tonight’s Cubs game, we tried on Julia’s Cub costume for her to become a baby ewok! 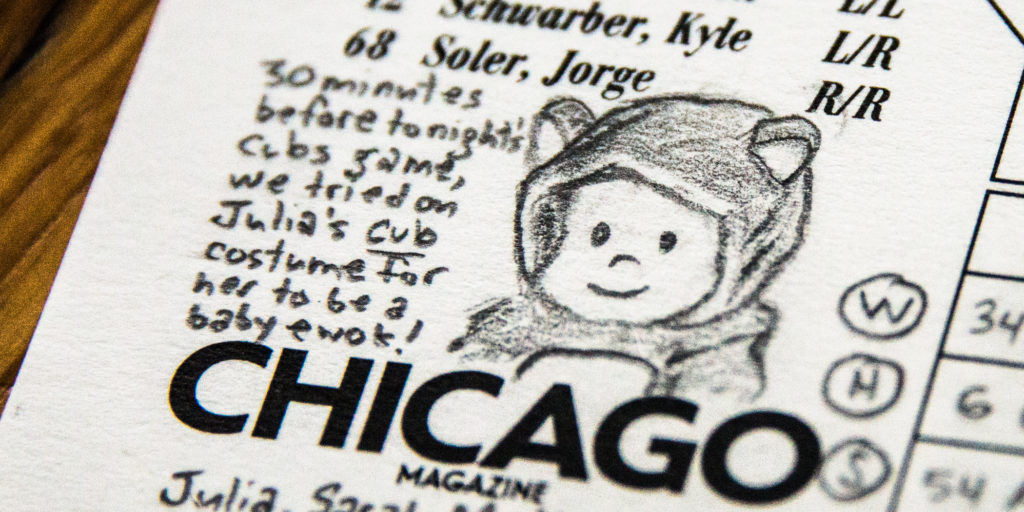 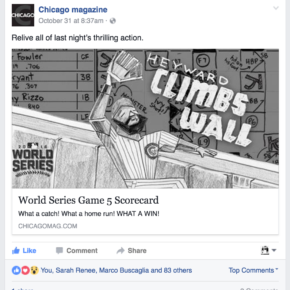 Chicago magazine website
“What a catch! What a home run! WHAT A WIN!”

The Bryant promo for game 5 that wasn’t run by Chicago magazine: 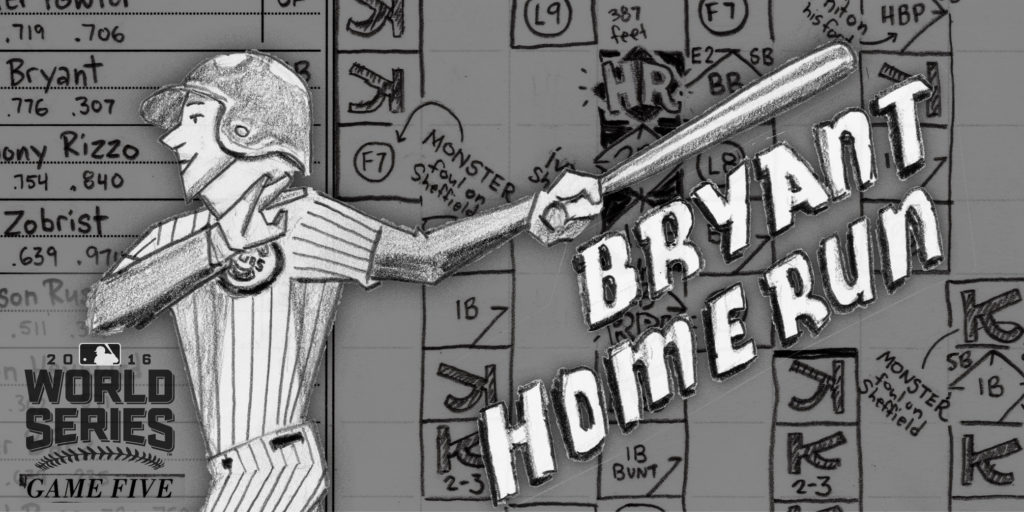 The game 6 scorecard is a GRAND SLAM! Stay tuned for the triple-homer game.