Skip to content
This is the 9th of 13 daily blog posts covering my World Series scorecards. Every day a new blog post in the series will be posted. 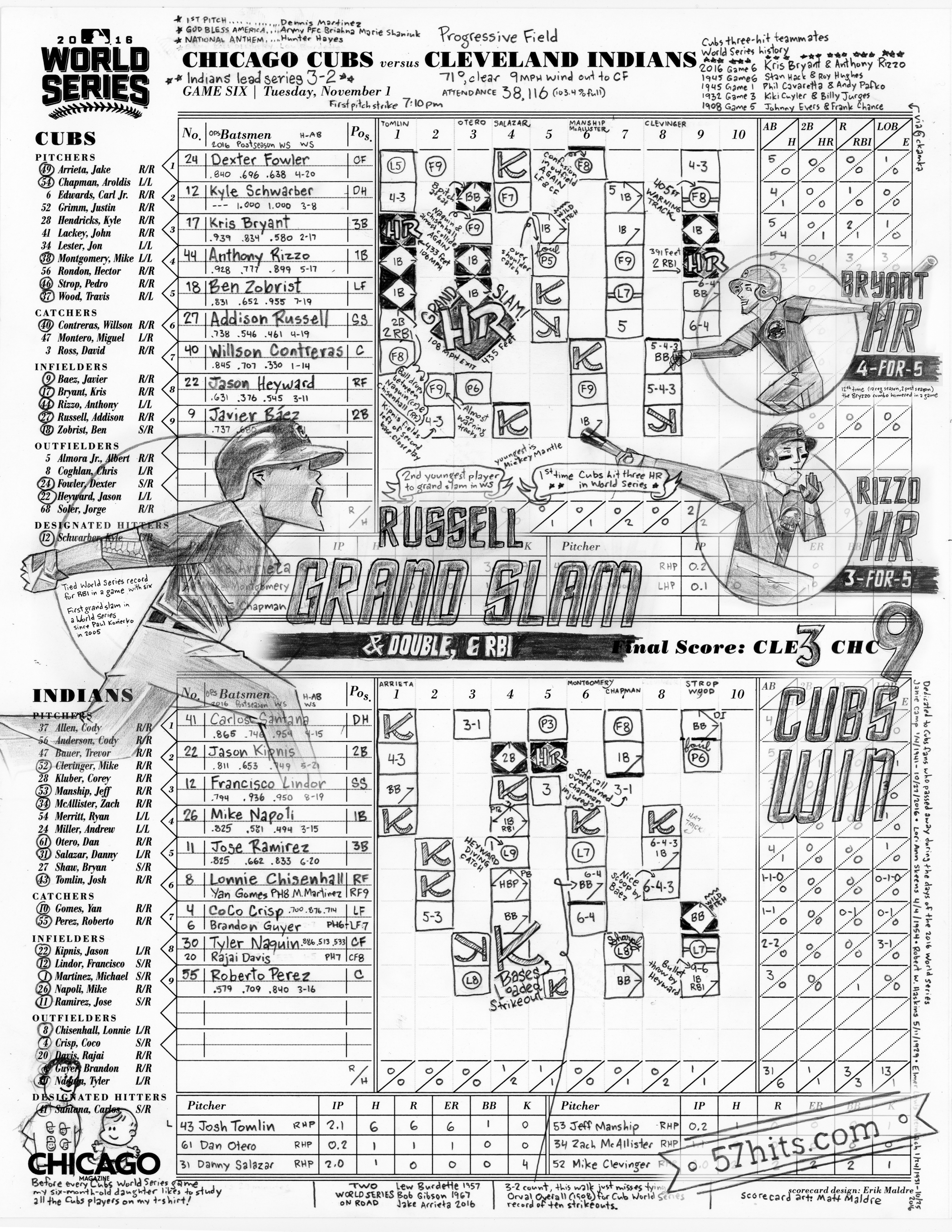 So many incredible moments from game six to illustrate

Grand slam, pair of homeruns by #Bryzzo, diving catch by Heyward, goofy errors by Indian outfielders, strikeout record almost tied, the incredible bullet throw by Heyward, the scoop play by Báez, super-fraction close call play by Chapman, and this game enabled us to a game 7! 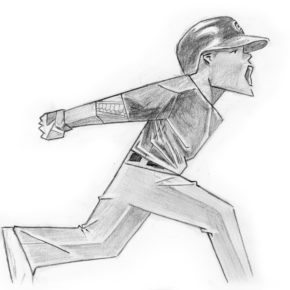 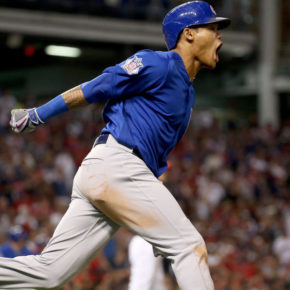 Addison Russell’s grand slam will live in Cubs lore forever. The Cubs lead jumped from 3-0 to 7-0 in the third inning! Since the Cubs won 9-3, Russell got the game-winning RBI.

Addison Russell’s posture with him flying around the bases leaning forward totally fit with the cubist style of dominating shapes. Arm lined up straight back, head projecting forward, even his hunchback posture fit with the overall punch of this composition. (Photo reference Brian Cassella / Chicago Tribune)

Since the Cubs were on the road, they were wearing their solid blue uniform tops. I rather missed the pattern that the pinstripes made. But at least Russell has a funky patterned tattoo on his right forearm. Subtle, but it’s there.

Adding extra design on the scorecard

For the drawings on this scorecard, I designed them a bit more. They each have a circle shape with the text coming out of the circle. 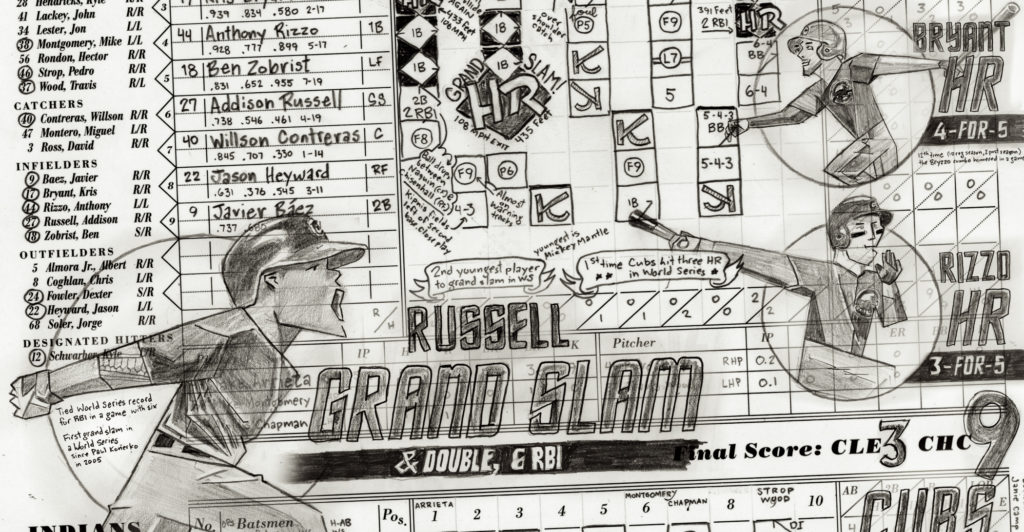 To mimic the angles used in the drawings, I selected a specific font that also has angles in the letterforms. The font “Federation Classic” has some dramatic angles. Plus, it’s a bit more condensed face, enabling it to be set in a larger font size on the scorecard. 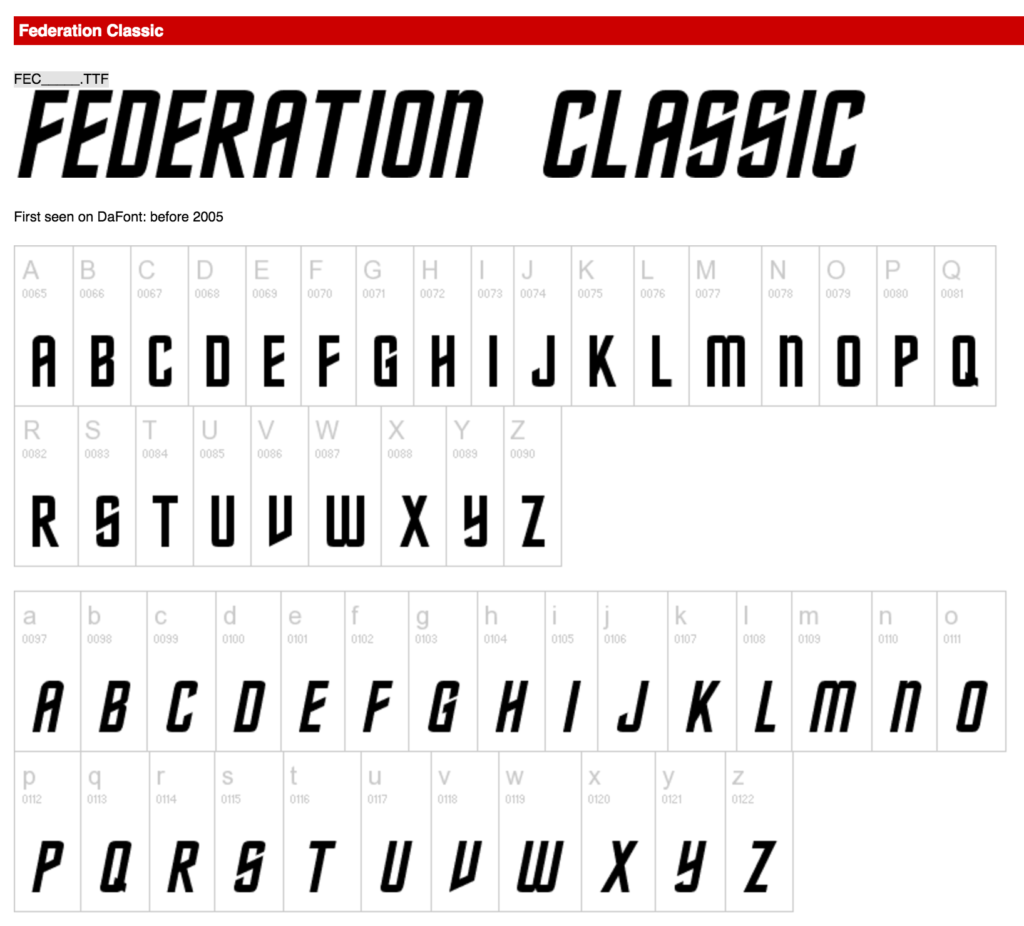 No intentional connection intended with Star Trek and the Cubs. 😉

Before this game, my brother (who designed the scorecards) faved a Cubs poster on the photo website, Flickr. 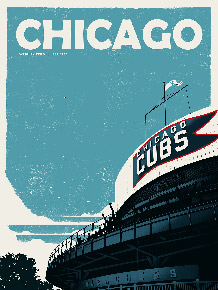 “I saw that Wrigley Field poster you liked on Flickr,” I told Erik over IM, “It made me think, I’d like to make my scorecards look like posters.”

Granted, this scorecard doesn’t look like a poster. But the little bit of extra design helps to make a step closer in that direction. As I mentioned in the blog post for game 5, doing scorecards for all the games in the series really helps me to develop the style for these scorecards. As an artist, I know the importance of working in a series to help develop your style and concept. The frequency of numbers gives you more room to play.

At some point, I’d like to continue making more scorecards for big Cubs games of the past. Along the way, I’ll develop more of a refined style.

The pairing of both Rizzo and Bryant hitting a home run in the same game was so much fun. I had to illustrate both of their home runs. 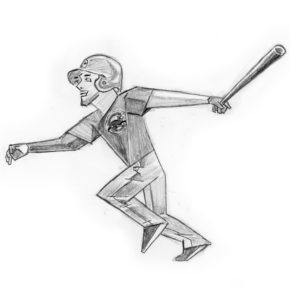 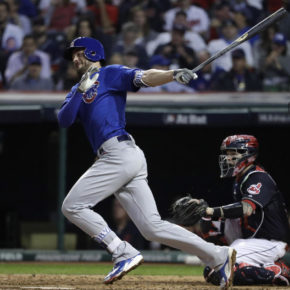 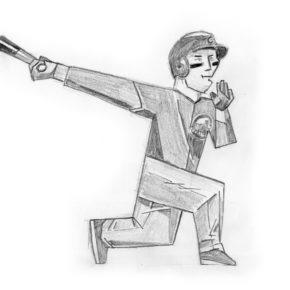 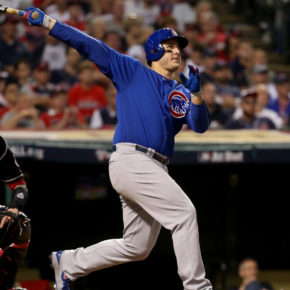 And now, we have a game 7! Unbelievable. After game 4, it seemed so unlikely. But this is the 2016 Cubs. You can’t ever count them out. 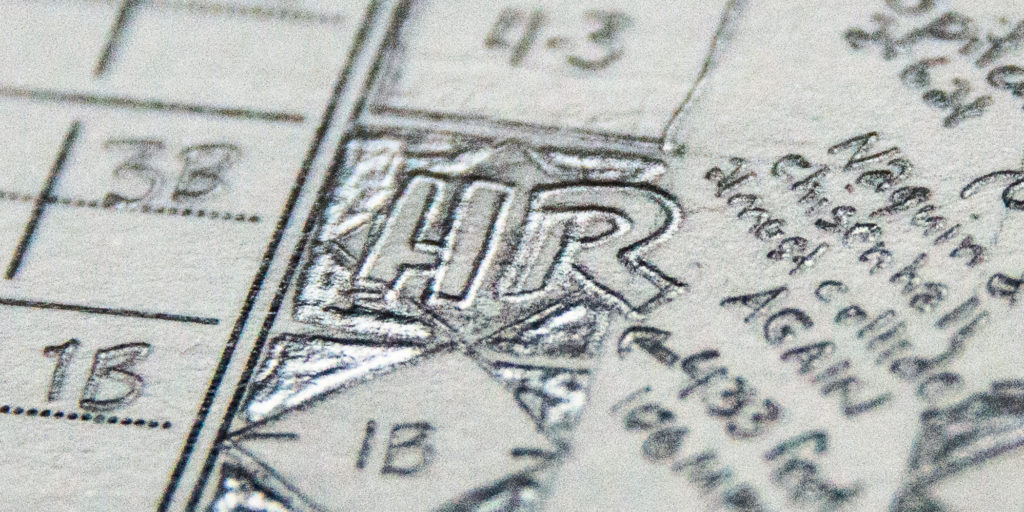 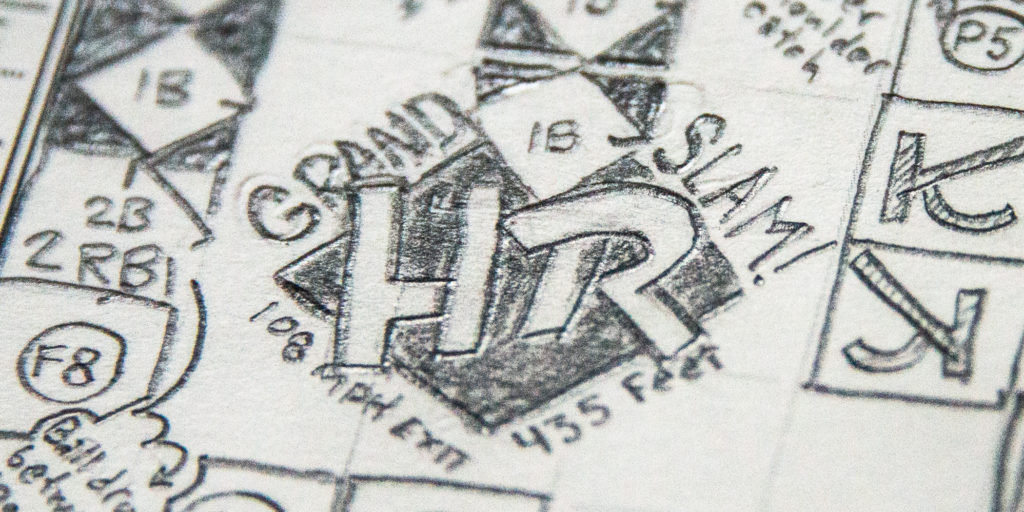 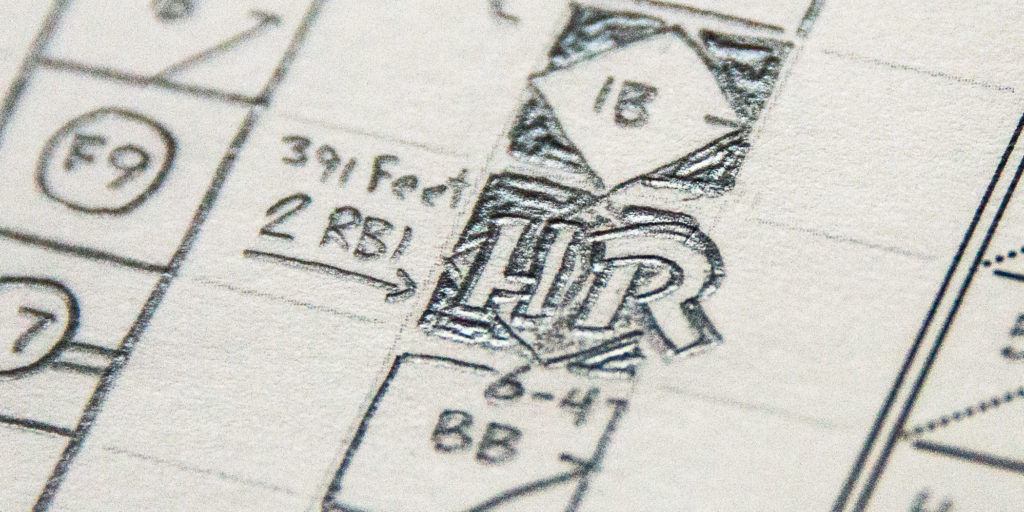 Before every Cubs World Series game, my six-month-old daughter likes to study all the Cubs players on my t-shirt! 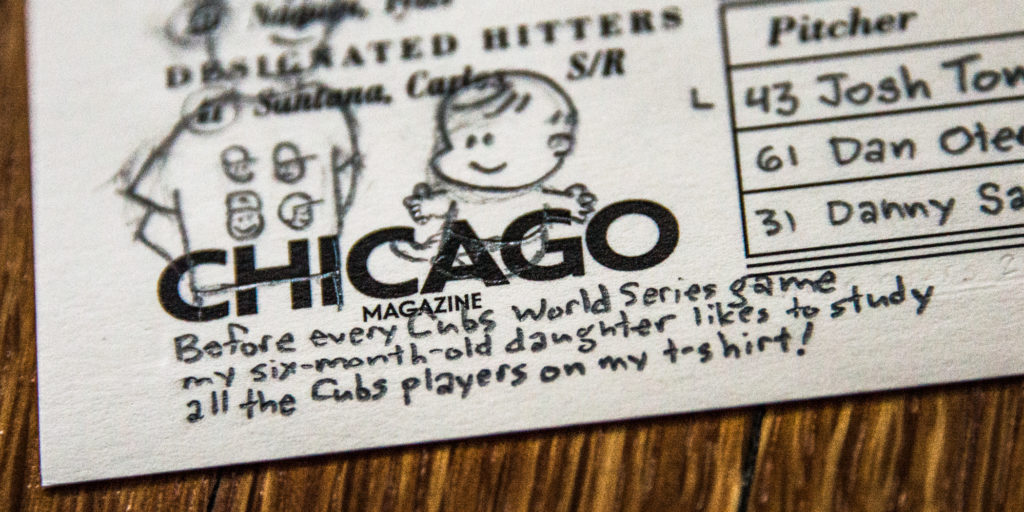 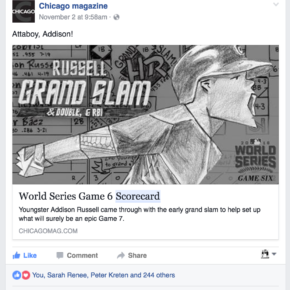 Chicago magazine website
“Youngster Addison Russell came through with the early grand slam to help set up what will surely be an epic Game 7.”

Twitter
“This is a scorecard we’ll be admiring for a long time. #flythew”

Bryzzo promo for game 6 that Chicago magazine didn’t use: 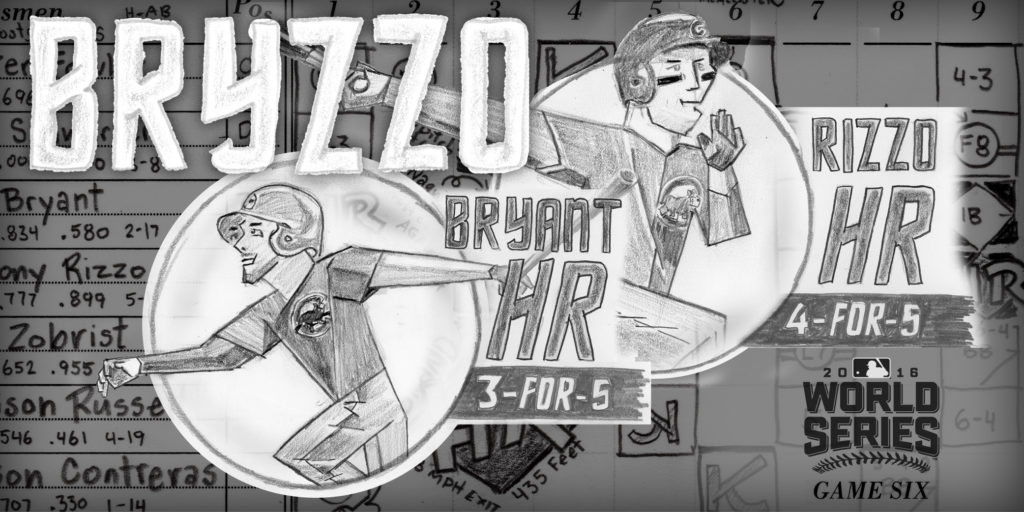