Skip to content
This is the 10th of 13 daily blog posts covering my World Series scorecards. Every day a new blog post in the series will be posted. 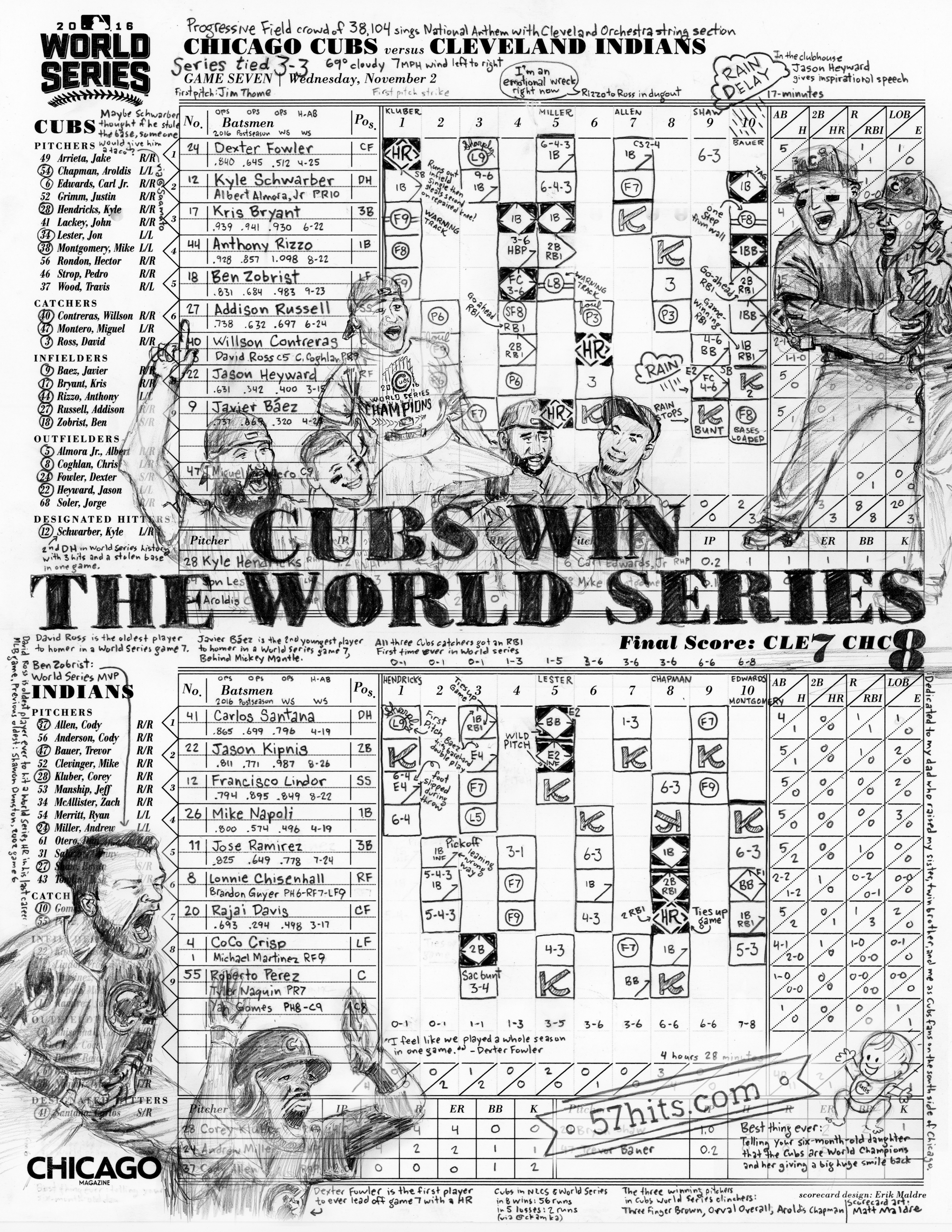 At the start of the series, I printed out scorecards for seven games. I never really thought I would need all seven. When the Indians took the series lead 3-1, the Cubs were on the verge of losing the World Series. At the start of every game thereafter, I would pull out a fresh scorecard, thinking this might be the final one.

I started planning in my head what I would say on the scorecard if the Cubs lost. Some games are just duds, and so I have a back-up plan just in case to feature SOMETHING, anything. One phrase I played with my head was, “Thank you Cubs for a great 2016 season” or something like that. I was even going to design it ahead of time, because the deadlines for these scorecards are so tight. I pull near all-nighters to complete them for Chicago magazine.

I pulled a complete all-nighter to finish the game 6 scorecard. The extra design flourishes on the card took me all through the night and into the morning. Then 8am hit, and it was time to go to work!

With game seven happening that night, I knew I needed to get some sleep. I needed to be completely alert for game seven. I wouldn’t be able to function late into the night on no sleep from the night prior. So I called in sick to work, so I could sleep during the day. The eight-hour workday ended up being a huge benefit to me, as I was able to get eight hours of sleep before game 7!

Game seven is so big, the scorecard needed to be printed on gold foil paper. But just like every game, it starts the same—with a blank slate. At the end of this scorecard one team was going to be the champion.

If the Cubs won, oh boy. The Cubs winning the World Series! That’s INCREDIBLE! I knew I would include the celebration scene on the scorecard, along with the words really big CUBS WIN THE WORLD SERIES!

So fitting that the final play of the game was Kris Bryant throwing to Anthony Rizzo. They each ran up to each other first and celebrated together. The image is an iconic photo by the Chicago Tribune’s Brian Cassella. It also included Javier Baez and Addison Russell landing after their celebration jump. Mike Montgomery, who pitched the final out, was left standing awkwardly. In fact, afterwards he admitted that he didn’t know what to do after the final out. 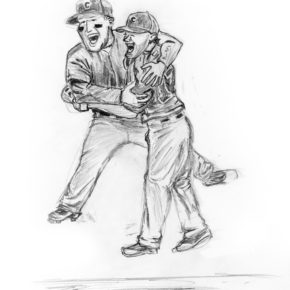 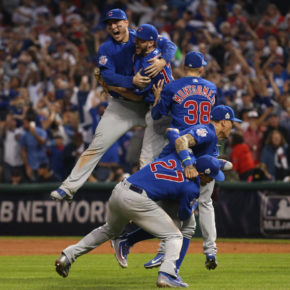 This illustration had a specific space to fill in the scorecard, the vertical spot on the right. The area didn’t really have room for all five players, so I focused on just Rizzo and Bryant. Baez, Russell, and Montgomery got excluded. In retrospect, I want to include them in the drawing, for a couple reasons. At some point I will be redrawing this illustration to include all five players. Baez, Russell, and Montgomery were all important to the Cubs in the postseason.

I’d like to redraw it in the cubist style. I frankly ran out of time to do something stylized, so I went back to my traditional drawing style of slightly cartoonish, slightly realistic. My wife called it an editorial cartoon style—which that description is rather nice. 😃

It would be so cool to have that composition of five players jumping up in down, mimicking the look of Duchamp’s “Nude Descending a Staircase, No. 2” (a modernist classic painting). 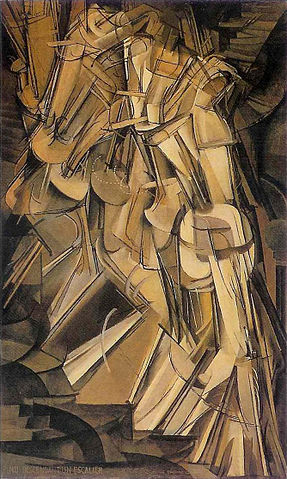 A very endearing moment happened after the win. David “Grandpa Rossy” just played his last MLB game with a home run. Fox was interviewing him when all of the sudden Anthony Rizzo and Jason Heyward picked up Ross and carried him on their shoulders! The team rallied together as he was carried off the field. (photo reference Brian Cassella / Chicago Tribune) 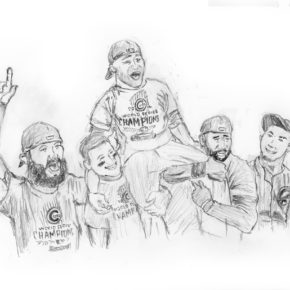 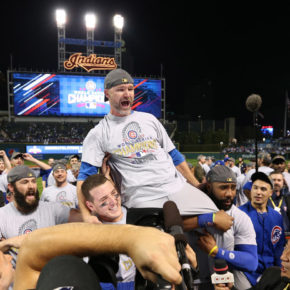 Plus, this gave Heyward another appearance on the scorecards. He didn’t carry a big bat, but he does give the team a lot in team leadership. As you know, it was Heyward who spoke up during the 10th inning rain delay and inspired the Cubs to not give up after the game got tied.

When the rain delay was happening, I simply added a little cloud above the 10th inning to indicate this pause in play. Most times you wouldn’t even include a rain delay observation on your scorecard, but since I’m doing highly detailed scorecards, it’s something I wanted to capture. 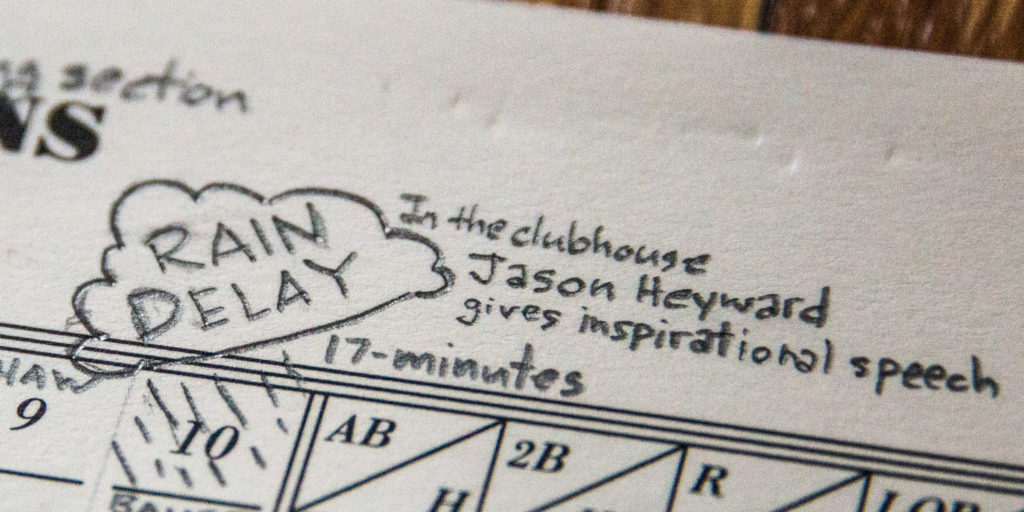 Lo and behold, after the game we found out just how important that rain delay was in the visiting Cubs clubhouse.

Ben Zobrist’s 10th inning double was the biggest at bat for the Cubs in this World Series. I believe it also ranks in the top 15 plays of all time in baseball. 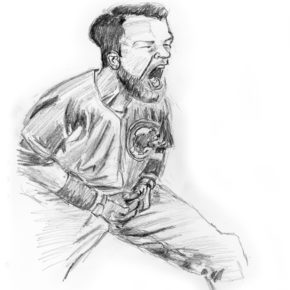 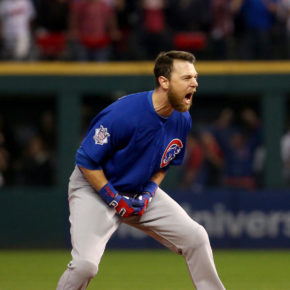 Even though I want to go back and cubist-ize the drawings on this card, I like the Ben Zobrist drawing so much, I almost don’t want to redo his. (photo reference Brian Casssella / Chicago Tribune)

With the ups and downs in this game, this scorecard totally needs a WPA (wins probability added) chart to show just how much the game swung around for the Indians in the 8th inning. And then it swung back around for the Cubs in the 10th inning. This game has to rank second all-time for the greatest swing back and forth.

Second to the 1960 World Series game 7. That game had three huge plays:

Rajai Davis, who was in the lineup for his defense ended up hitting the game-tying home run for the Indians in the bottom of the 8th. It actually ranked as the highest WPA event in this World Series with a WPA 39%. (Zobrist’s double is 31%).

As Davis circled around third base on his home run trot, he stuck his tongue out of his mouth. A very, very thick tongue. I swear, I think his tongue hit the home run. Thankfully, the Cubs came back in this game. I don’t know if I would want to see Rajai Davis’ humongous tongue flagging around for years and years.

A leadoff home run started game 7! So incredible! That home run totally started the tone of this game. The Cubs bats were ready! This drawing is Fowler giving a high-five to Schwarber at home plate. (photo reference from FOX Sports broadcast) 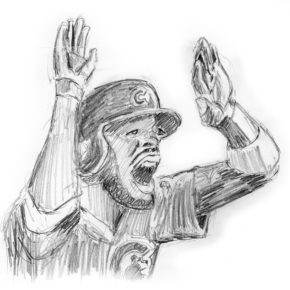 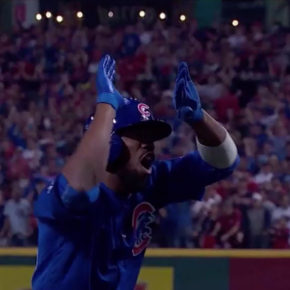 It’s not that great of a drawing. When I re-do the drawings on this card, I’m going to do Fowler running backwards looking at his teammates in the dugout. That’s the part all Cubs fans remember from his leadoff home run. (although later he Fowler said he turned around to make sure he stepped on first base.)

Other massive plays I could have illustrated: 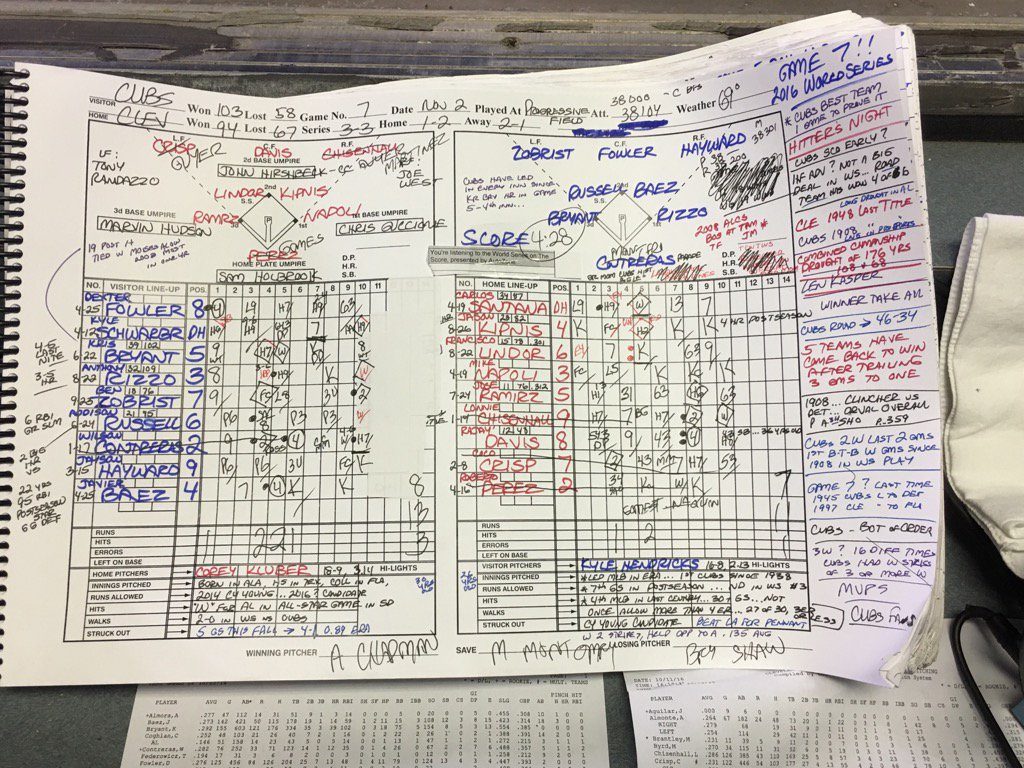 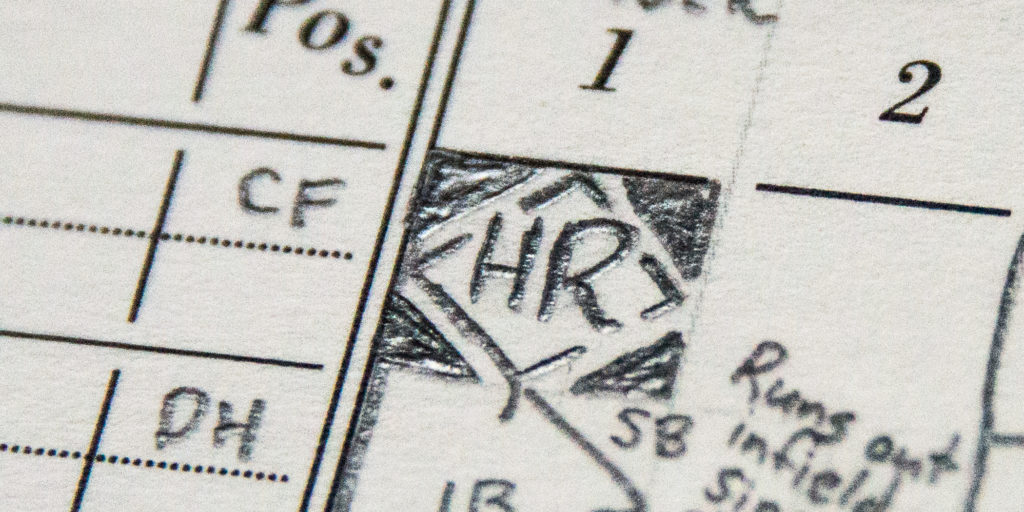 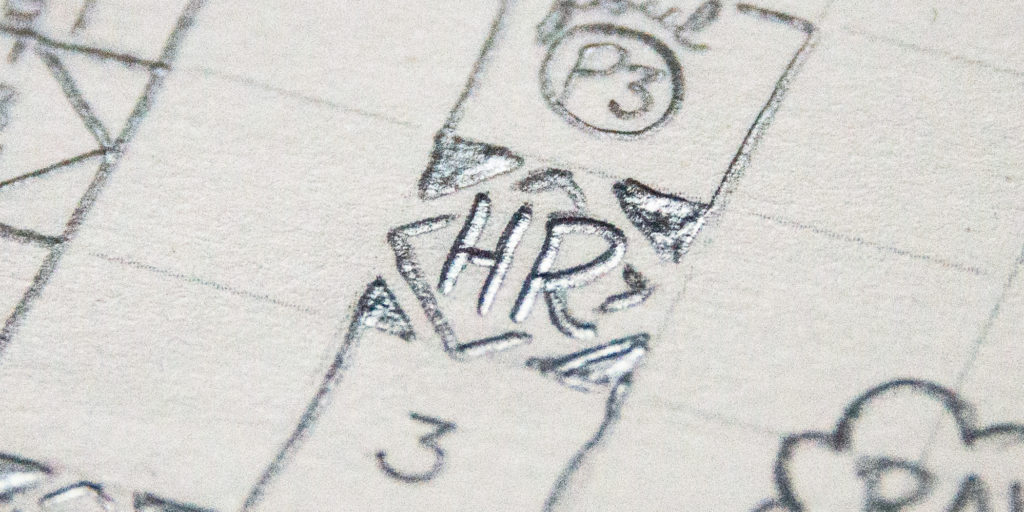 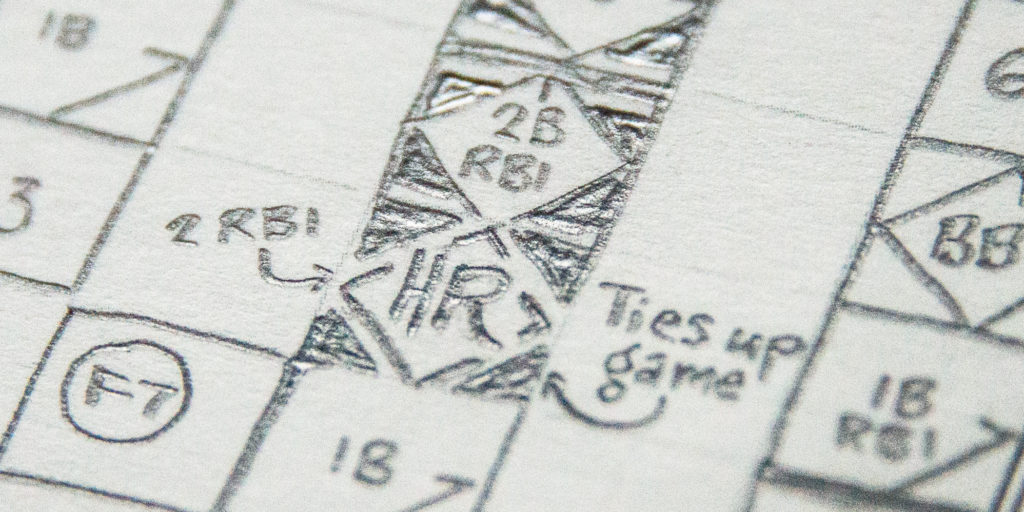 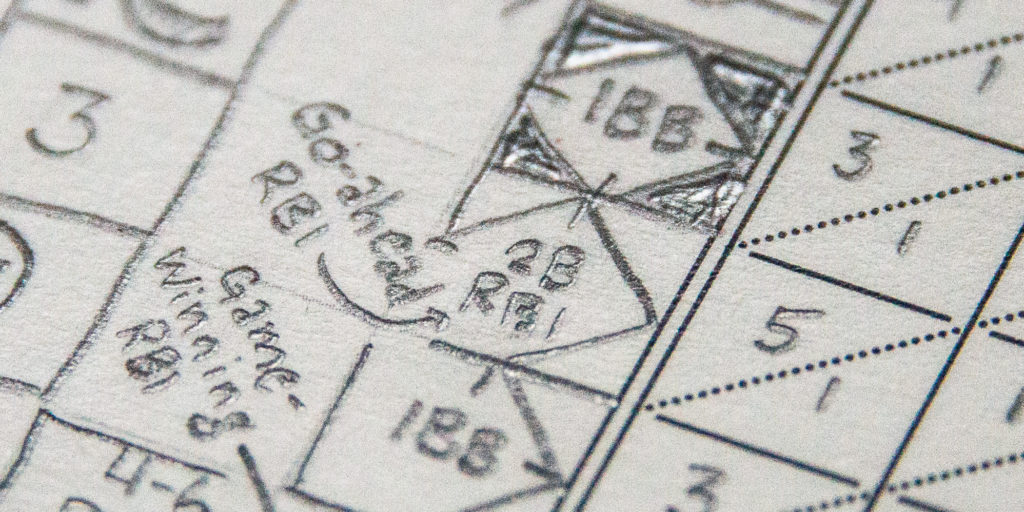 “I feel like we played a whole season in one game.” —Dexter Fowler 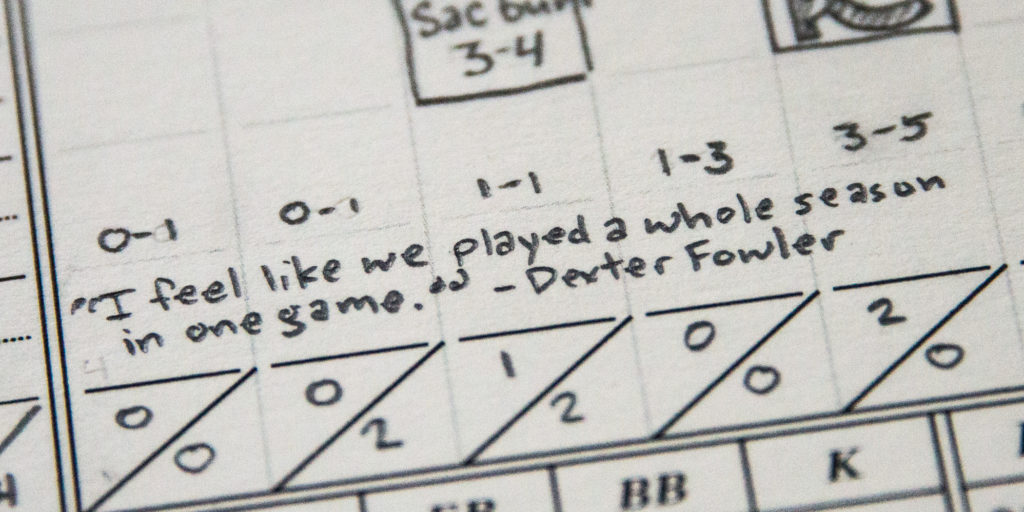 Best thing ever: telling your six-month-old daughter that the Cubs are World Series champions and her giving a big huge smile back 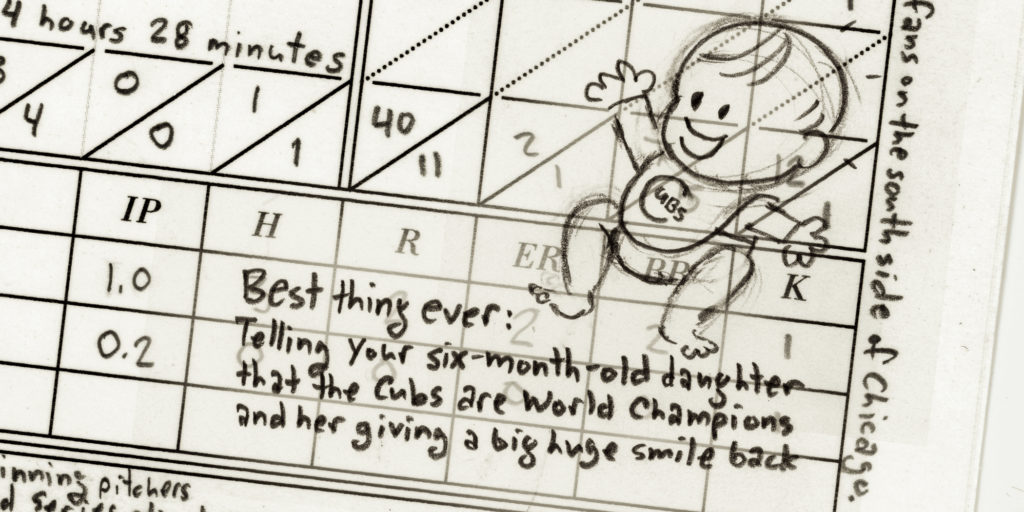 Dedicated to my dad who raised my sister, my twin brother, and me as Cubs fans on the south side of Chicago. 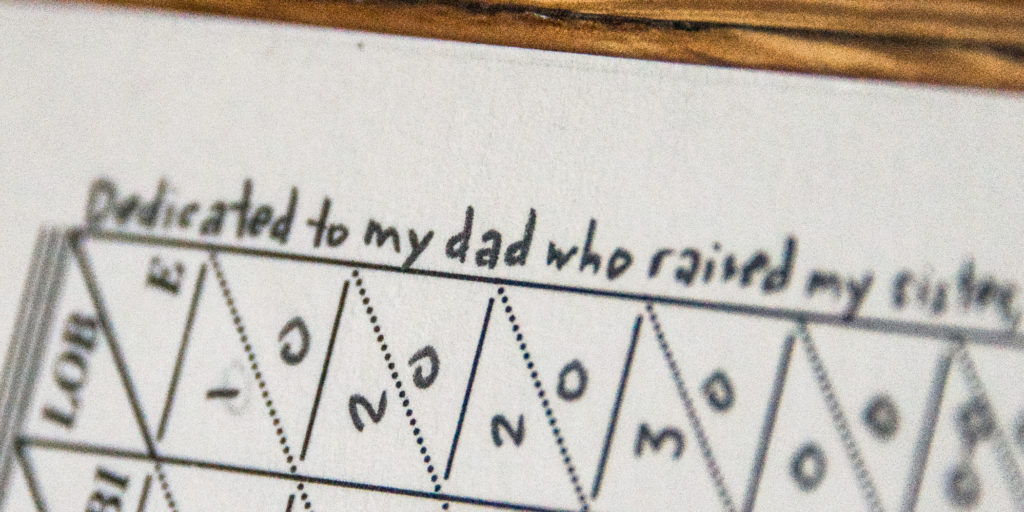 This scorecard was the most-read story on chicagomagazine.com for the day after game seven (November 3, 2016) 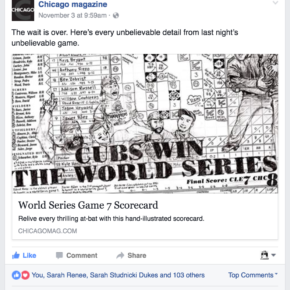 Chicago magazine website
“In an epic 10-inning, rain-delayed game, the Cubs delivered a result worth waiting for.”

Twitter
“Take it from Mr_Chuckletrousers: You’re gonna want to print these scorecards for posterity.” 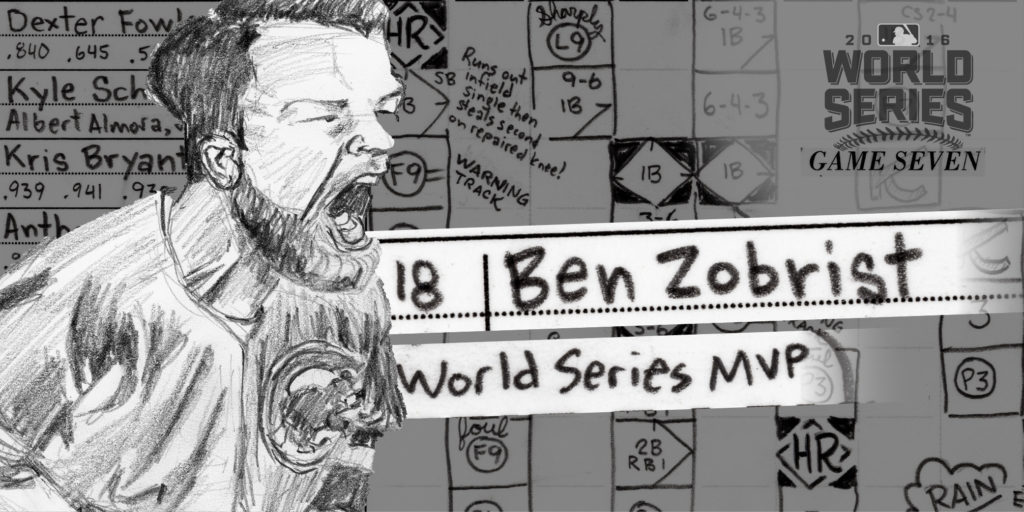 This was game 7. There is no more tomorrow scorecard! Well, maybe I’ll score the opening day for 2017. But for now, tomorrow’s blog post is about the Cubs scorecards from past years. It’s a pretty cool look at the vintage designs. Stay tuned!