Skip to content
This is post #6 of 13 daily blog posts covering my World Series scorecards. Every day a new blog post in the series will be posted. 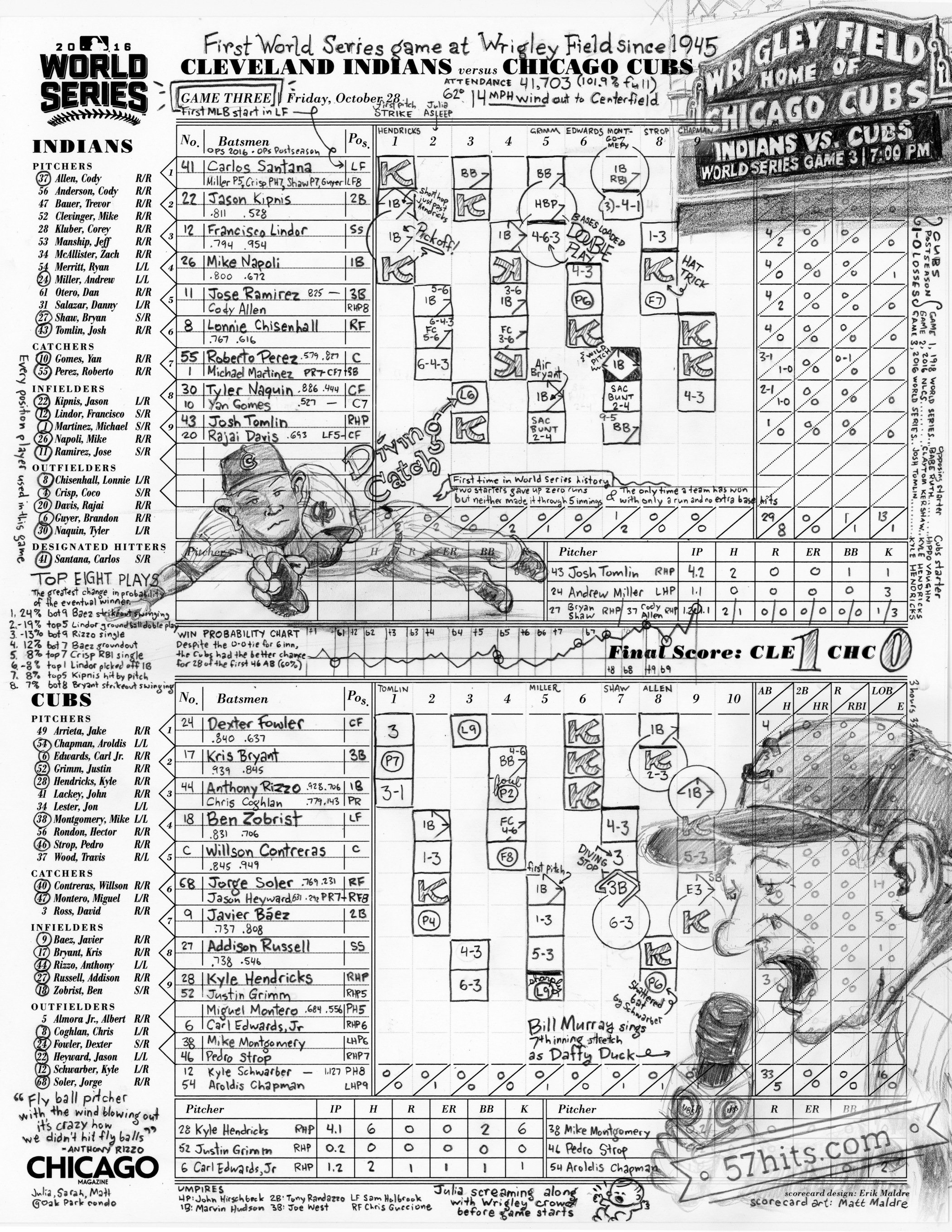 The first World Series game at Wrigley Field in a long, long time!

With the series tied up 1-1, there was great hope leading up to this game. The wind was blowing out at Wrigley, and the Indians had a fly ball pitcher on the mound. It was time for the Cubs to start hitting their home runs! Even Jorge Soler was in the lineup to take advantage of the wind.

However, the game was rather uneventful. The Cubs advanced only three runners past first base. There really wasn’t any sort of highlight the Cubs did during the game. Addison Russell had a diving catch. But since it was at the top of the inning with nobody on, the play didn’t really have much impact on the game. (Photo reference Brad Mangin/MLB Photos via Cubs Instagram) 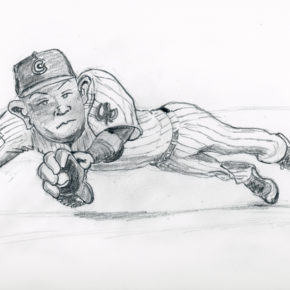 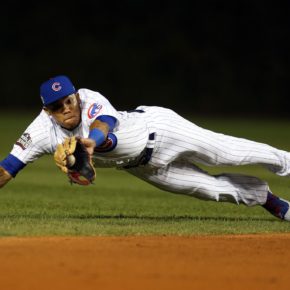 In fact, there is a stat that does rate every single play’s effect on a game. The WPA (Win Probability Added) rates how much one play adds to the team’s chance of winning. Addison Russell’s diving catch gave the Cubs a 3% more chance of winning the game. 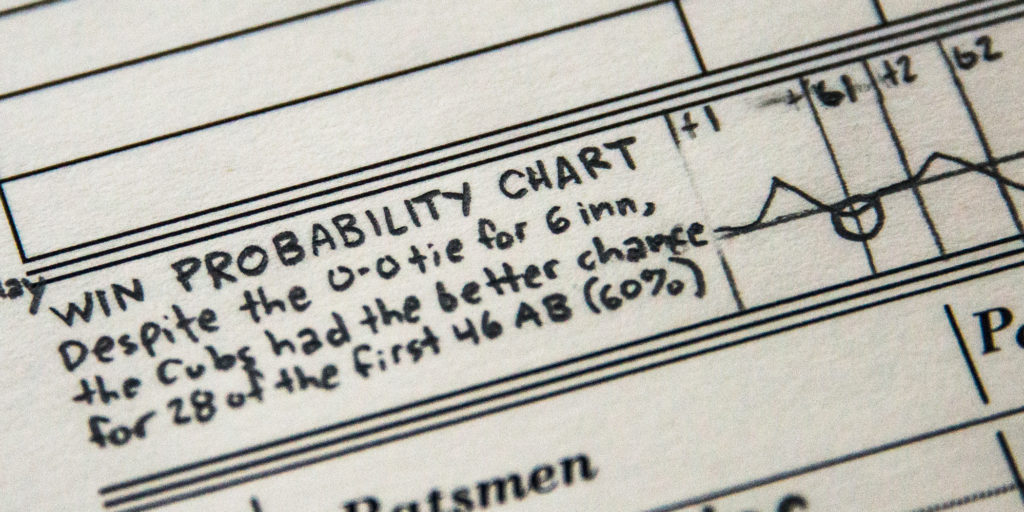 To give a little more interest in the card, I traced the Win Probability Chart onto the scorecard. The top 8 plays got circles on the chart, to match the circles I put around each of the plays in the scorecard grid. 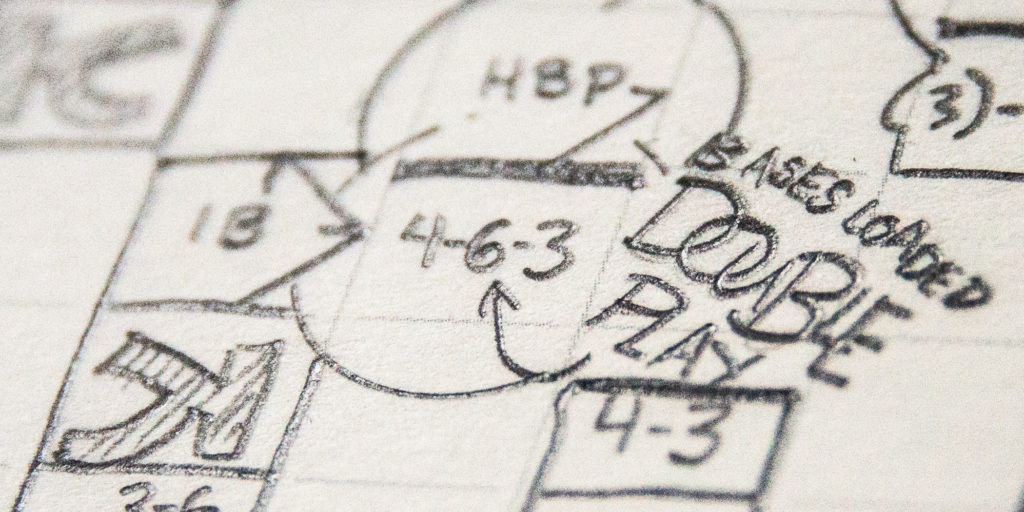 Top eight plays of this game

With the lack of top plays in this game, I knew I could at least rely on including a large factoid about this being the first World Series at Wrigley Field since 1945. 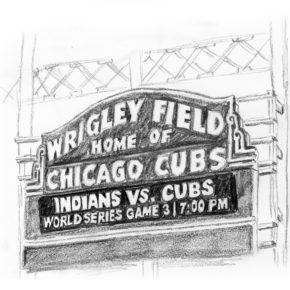 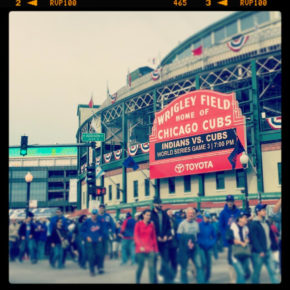 Instagram is full of various images of the marquee covering every possible angle. I wanted the marquee to be angled in, facing the contents of the card. Thank you to Courtney Lucien of Instagram for this pic that I used for reference in the drawing!

I also learned that filling in all the dark spaces around the white letters took forever to do. Revere typography in pencil—oh boy. My previous two scorecards for games one and two I stayed up until 3am and 4am working on them. They were played on a school night (Tuesday and Wednesday), so once the game was finished, I worked through the night to finish them. I can’t very well go to work at 9am the next morning and work on the scorecard!

Thankfully game 3 was played on a Friday night, so I had a little more flexibility with being able to continue working on the card on Saturday morning.

The other big highlight from the game was Bill Murray singing the 7th inning stretch—as Daffy Duck. Kinda crazy. But that’s Bill Murray. 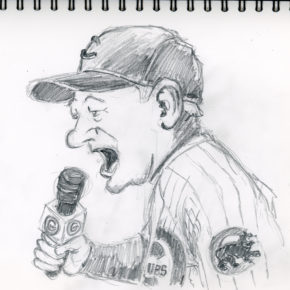 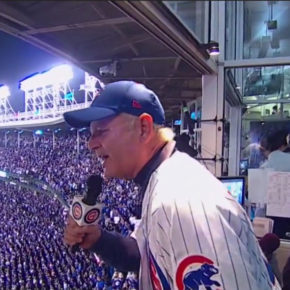 He’s rather hard to draw (photo reference FOX broadcast). The signature look for Murray is his receding hairline and large forehead, but with a baseball cap, these features are hidden. Plus, he’s no longer that middle-aged man in Ghostbusters. Murray is just a really old man now. When you draw him, it’s like, “oh that’s an old guy—WAIT—that’s Bill Murray?” Maybe a frontal view would be more representational of him. Or I could have had some spit lines coming out of his mouth for his Daffy Duck impersonation. Heh. That would have been funny. 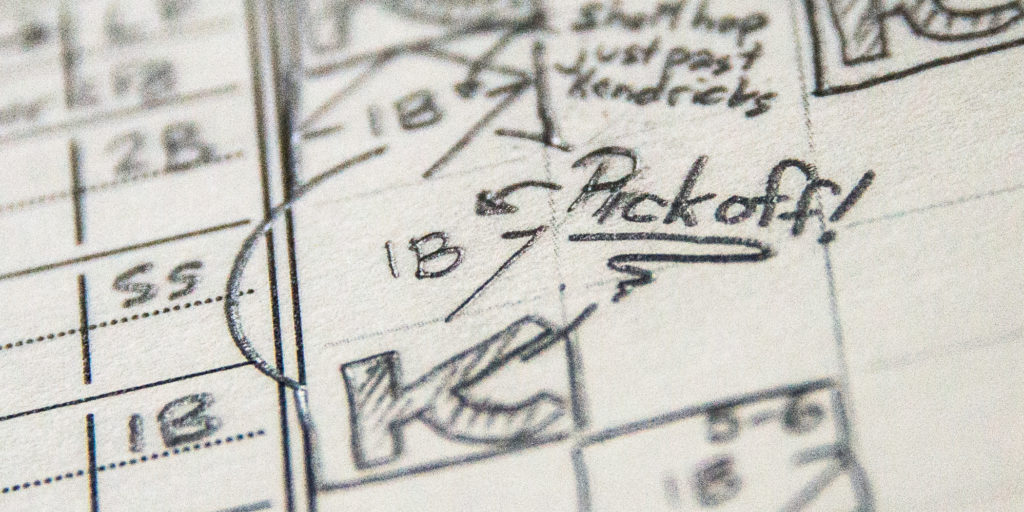 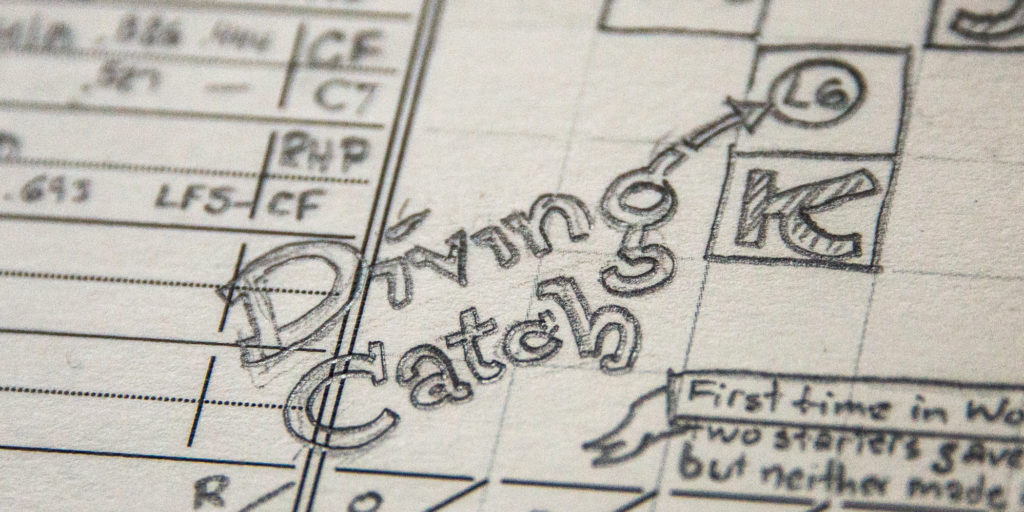 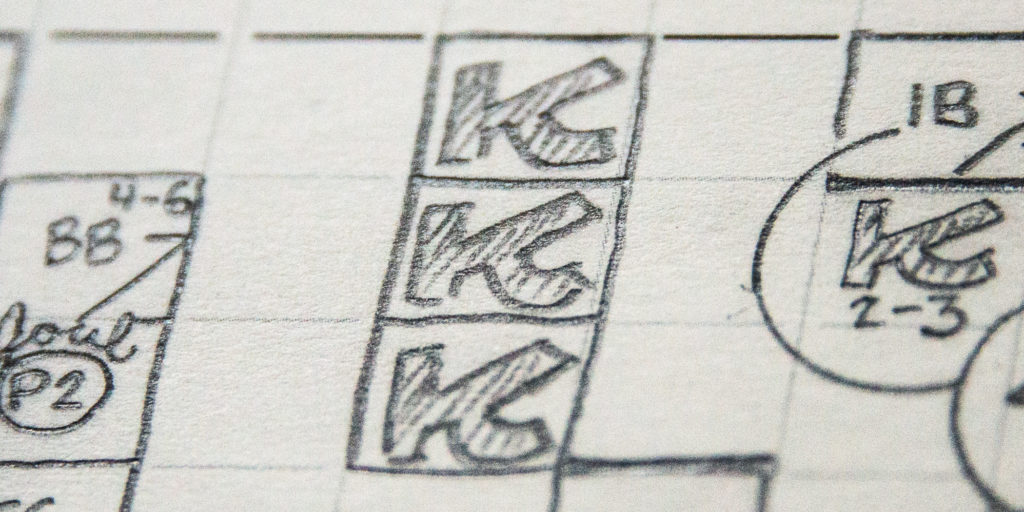 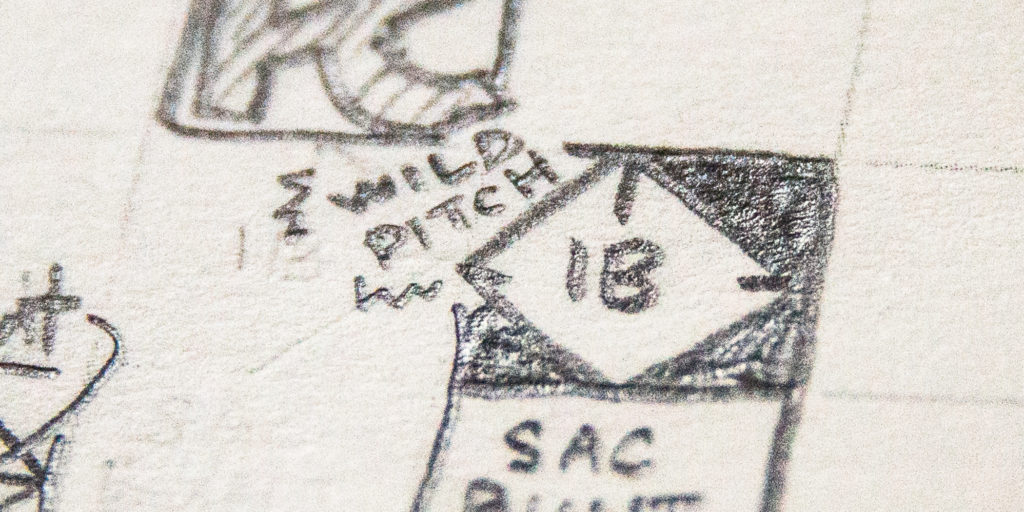 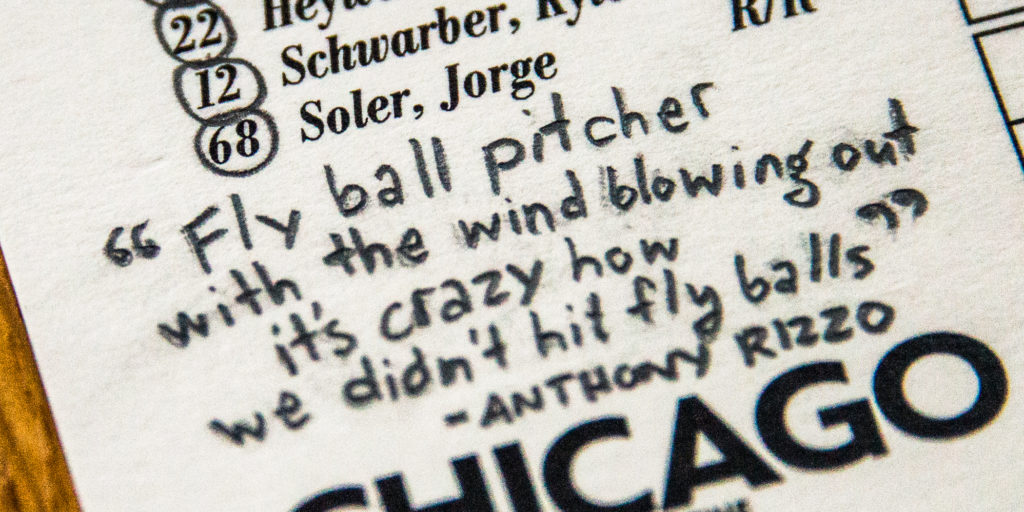 Julia screaming along with Wrigley crowed before game starts 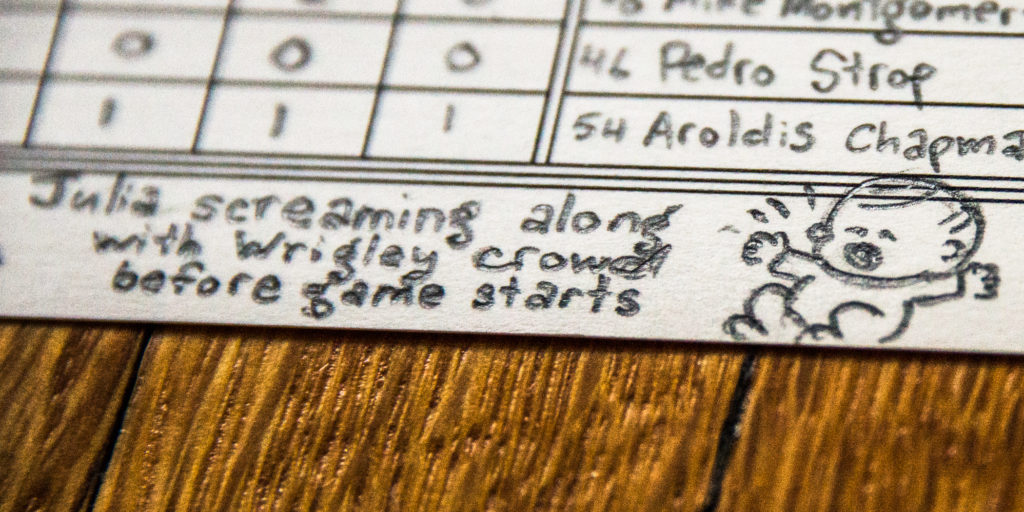 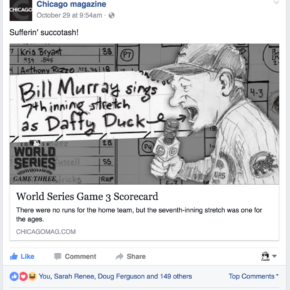 Chicago magazine website
“There were no runs for the home team, but the seventh-inning stretch was one for the ages.”

Twitter
“The Cubs couldn’t score any runs, but there were still some highlights #WorldSeries #WorldSeriesGame3” 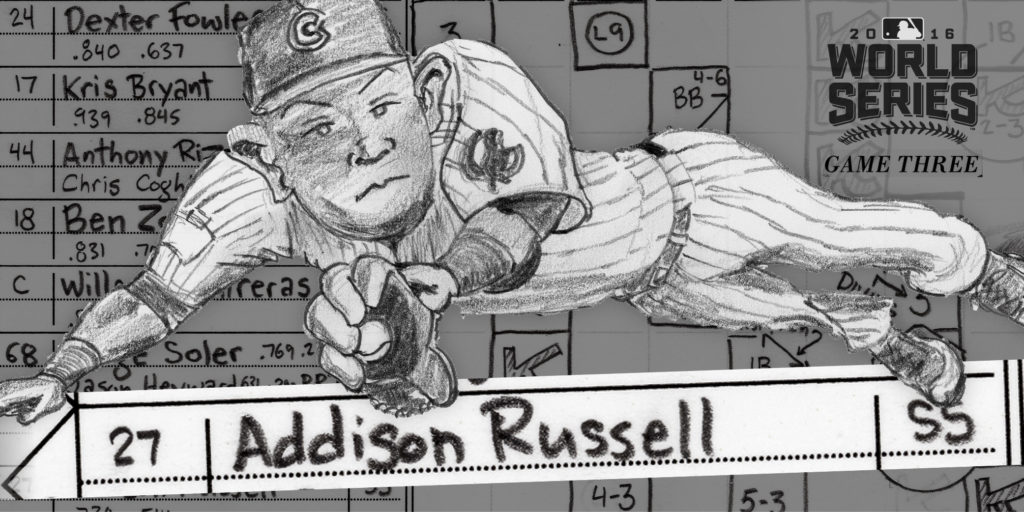 The game 4 scorecard hits the low-point for the Cubs in the World Series. But with any low points, there’s nowhere else to go but up! Stay tuned.