Skip to content
This is the 4th of 13 daily blog posts covering my World Series scorecards. Every day a new blog post in the series will be posted. 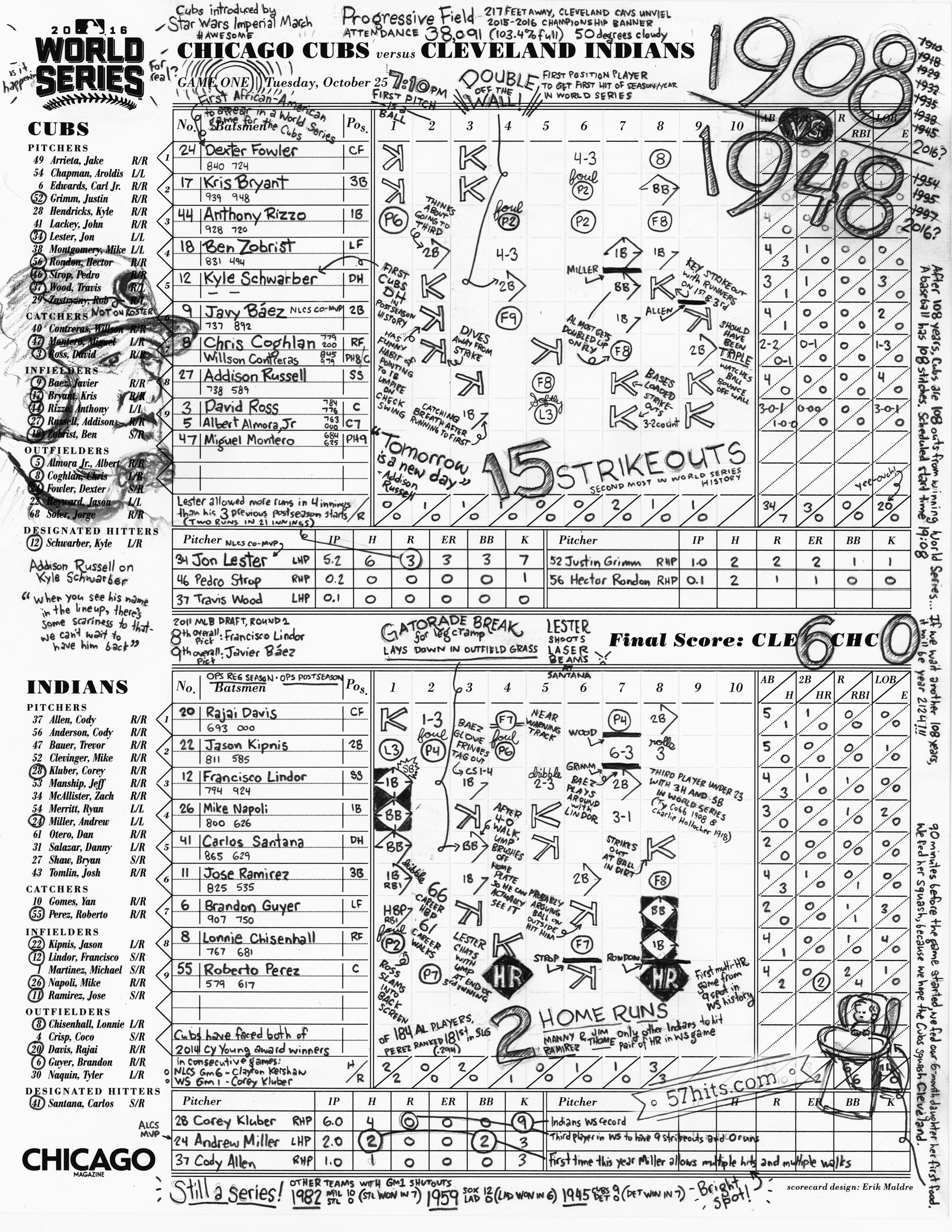 How I screwed up my first professional scorecard

Somehow I managed to mess up a major thing on my first scorecard I did for Chicago magazine. First, let’s set the scene (the mistake comes further down the blog post)

The Cubs are about to play their first World Series game in 71 years. The moment everyone has been waiting for. And I’m about to fill out an official scorecard for Chicago magazine to be seen by hundreds of thousands of people!

First food for daughter AND World Series on same night 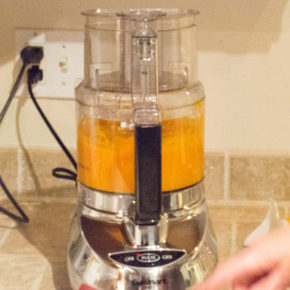 My scorecards for games one and two are ready. And we are now ready to feed our six-month-old daughter real food for the first time. Up to now she has been drinking only milk from her mom. Time to get our child onto real food! Sarah opted for squash, because it’s good for baby’s digestive systems, and bland enough to not cause bad reactions. 90 minutes before the Cubs first World Series game, we are feeding our daughter squash. I like to think it’s to help the Cubs squash the Indians!

Seeing her reactions to real food was fun. She sorta didn’t like it that much. It’s always fun to see baby’s reactions to various food. And now from this momentous occasion to another. The Cubs playing their first game the World Series since 1945!

Ready for the game

Before the game started, I looked up the rosters online (yes, they had been posted by now). Being overly anxious for both the game and to create a great scorecard, I carefully penciled in each name on the scorecard at my desk. 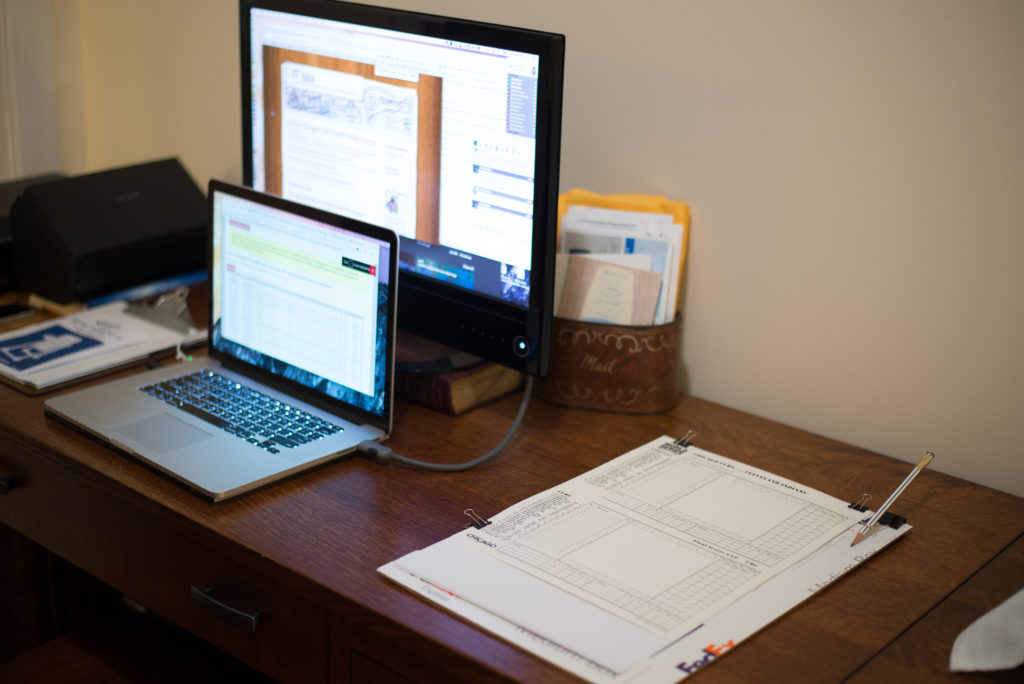 I’m all ready. Things are under control! The tv set is on with the pre-game show.

The Cubs were the away team, so they are the first to bat at the top of the inning. Dexter Fowler is up to bat. He becomes the first African-American player to play for the Cubs in the World Series. Incredible!

And now it’s time for the first pitch! Ball outside! A few pitches later Fowler strikes out. Let’s record the strikeout on the scorecard.

I had written all the Cubs names at the BOTTOM of the scorecard. Oops! The Cubs are the away team, so their names are supposed to be at the top of the scorecard. The home team always appears at the bottom half of the card.

I realized that I had written the Cubs at the bottom of the scorecard! But the Cubs aren’t the home team. They should be at the top of the card!

Oh boy. I haven’t even recorded my first play, and I already made a major catastrophic error on the scorecard. Maybe I could erase all the names and re-write them.

Nope. When I laid out the custom scorecards, I put the Cubs team roster at the bottom, and the Indians roster at the top. The very printed cards had the teams flip-flopped. We don’t have a printer at home, so I can’t quickly print out a new copy. Printing at the local library wasn’t going to happen, because the game is playing. There’s no stopping the game. I need to record it live, as it happens.

Thankfully I printed out two copies at work! Except my second copy has the wrong order printed too! Nothing a pair of scissors and tape can’t fix! I cut out the Cubs roster and Indians roster from my first scorecard, and taped them onto my backup print. Phew. Crisis averted. 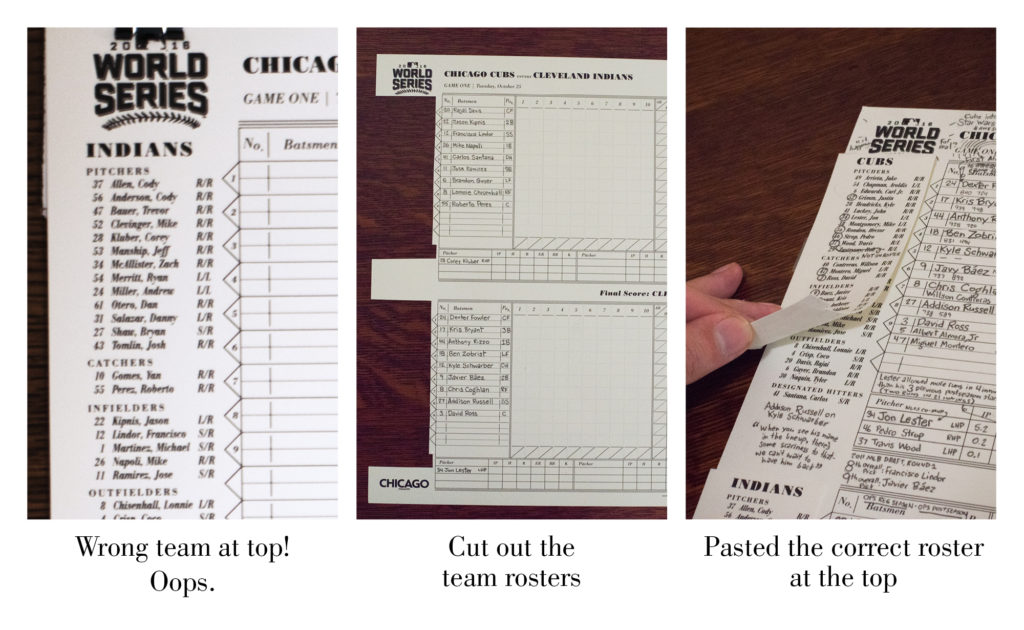 Yes, I am a professional scorekeeper.

I’m also used to filling out a scorecard with a Cubs win. The Cubbies lost the game 6-0, striking out 15 times. Ouch. It’s rather strange filling out a losing scorecard and trying to herald moments of the game. But as I’ve been telling people this year, we should be celebrating our losses. And that’s what I did on this scorecard.

Factoid about my daughter

In the bottom corner of the scorecard, I did the same thing with the previous game where I included a little note about my daughter. Her first taste of real food 90 minutes before the first Cubs World Series game is just an amazing cross-over, so I included that. 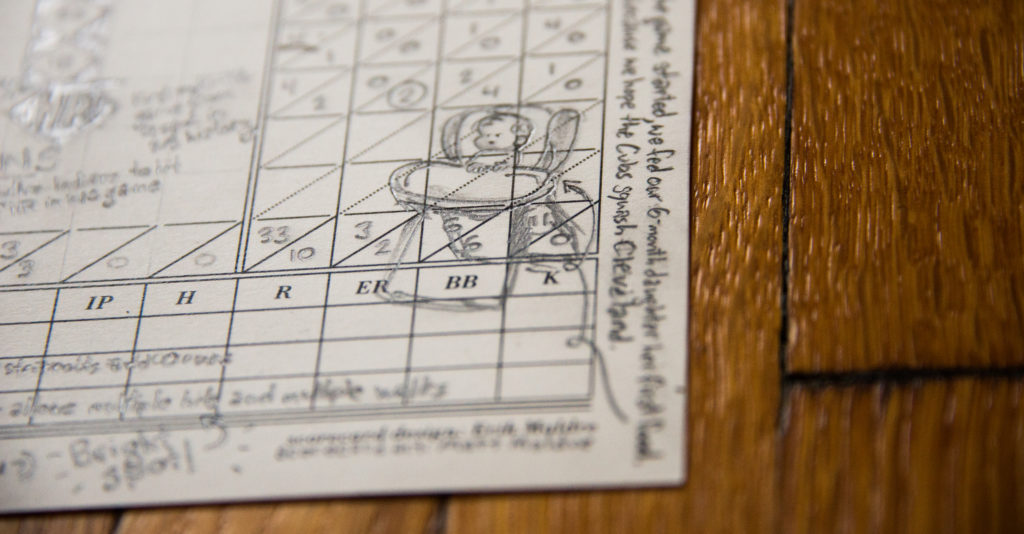 “90 minutes before the game started, we fed our 6-month daughter her first food. We fed her squash, because we hope the Cubs squash Cleveland.”

You can notice the erase marks under “squash Cleveland.” I originally wanted to write “squash the Indians” but I thought that phrase might have some offensive undertones like, “HERE INDIANS TAKE YOUR THANKSGIVING FOOD AND STUFF IT”. So I used Cleveland instead. 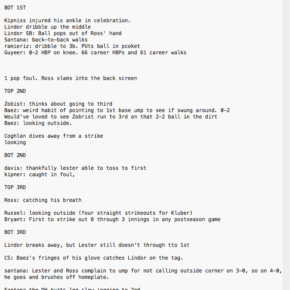 Logically, after the game, I would look at my list and decide what pieces of information would go where on the card. As you can imagine, that’s a rather tedious project. Baseball is a rather slow game, so you normally have time during the game to casually write in observations as they happen in the game. But now I’m repeating the game all over again once it’s done by filling in all the details afterwards. Hence, being up until 4:30am. But: World Series scorecard. To be published on the homepage of Chicago magazine’s website. And promoted heavily across all their social media platforms? Totally worth it.

After seeing the scorecard online. It felt like something was very much missing. I had no large drawings on the card. Sure, it was LOADED with trivia and observations, but there was no art. In fact, Chicago magazine even said “Even our artist finds a bright spot in yesterday’s loss”. The “our artist” line got me thinking. I need to fill this scorecard out like an artist!

I got too overwhelmed by the historical nature of this game, and wanted to capture all the little details and factoids, that I lost sight of the artistic nature of the game.

Since Schwarber was one of the bright spots in the game, I decided to do a drawing of him. My original scorecard was at home, so I needed to do another quick last-minute fix-up job. I quickly made a sketch of Schwarber and photoshopped him into the card. (Thank you Ron Vesely / MLB Photos for the image reference). I sent the updated scorecard back over to Chicago magazine for a better version that might gather more attention by their readers. 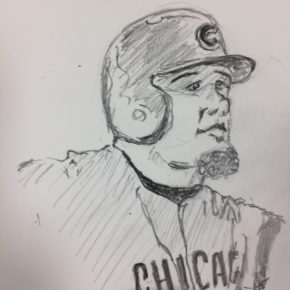 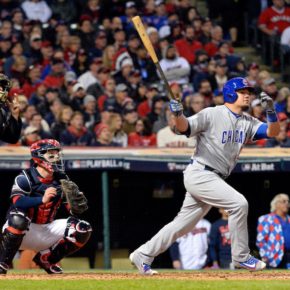 Some other factoids I didn’t include on the scorecard

Factoids included on the scorecard from game 1 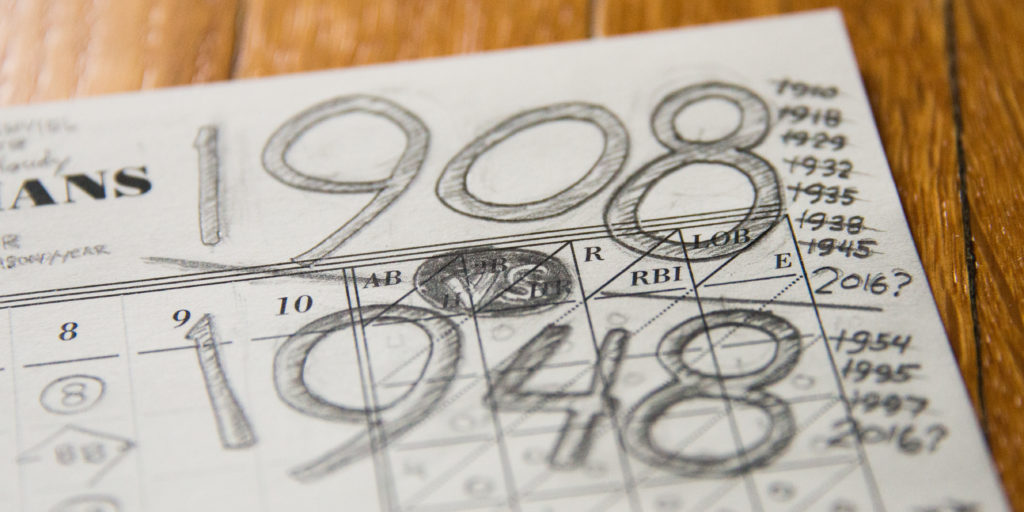 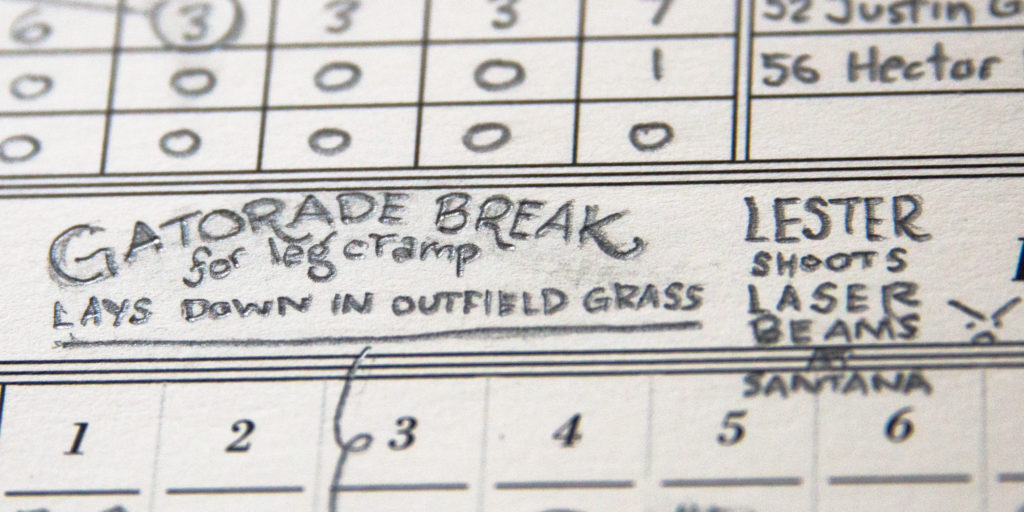 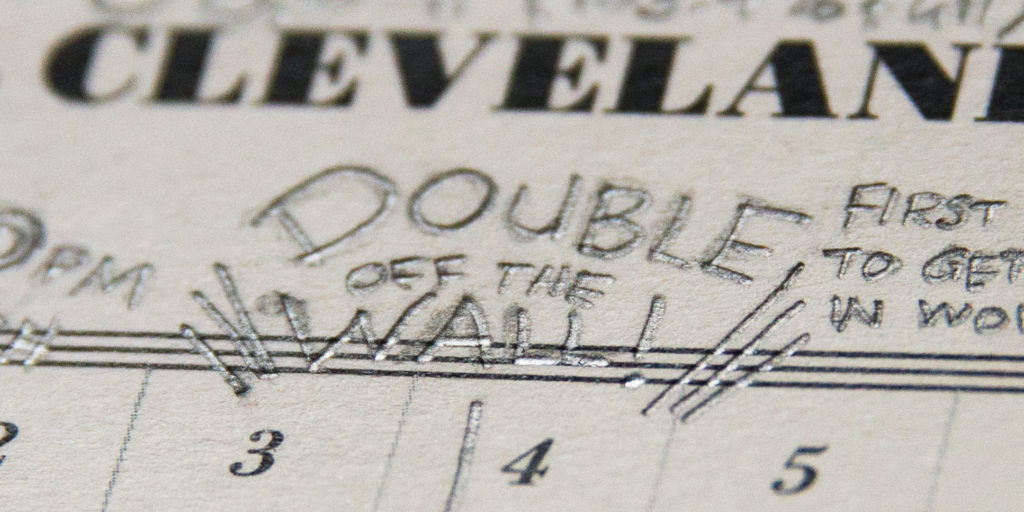 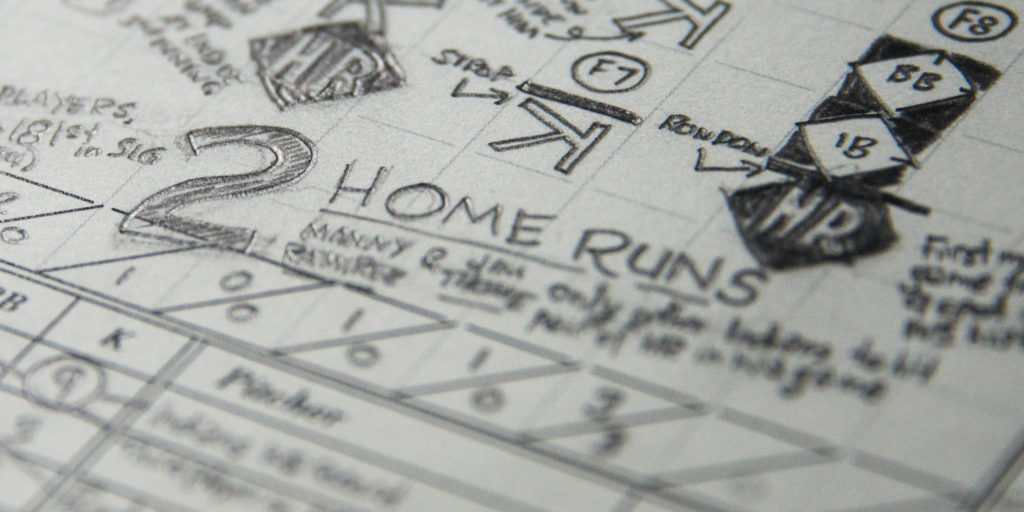 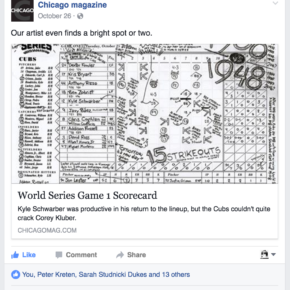 Chicago magazine website
“Kyle Schwarber was productive in his return to the lineup, but the Cubs couldn’t quite crack Corey Kluber.”

Facebook
“Our artist even finds a bright spot or two.”

Twitter
“Game 1 of the #WorldSeries… not so great. But this hand-drawn scorecard brings it to life”

Twitter
“We commissioned hand-drawn scorecards for each #worldseries game. Wish it had a happier result, but here’s Game 1.” 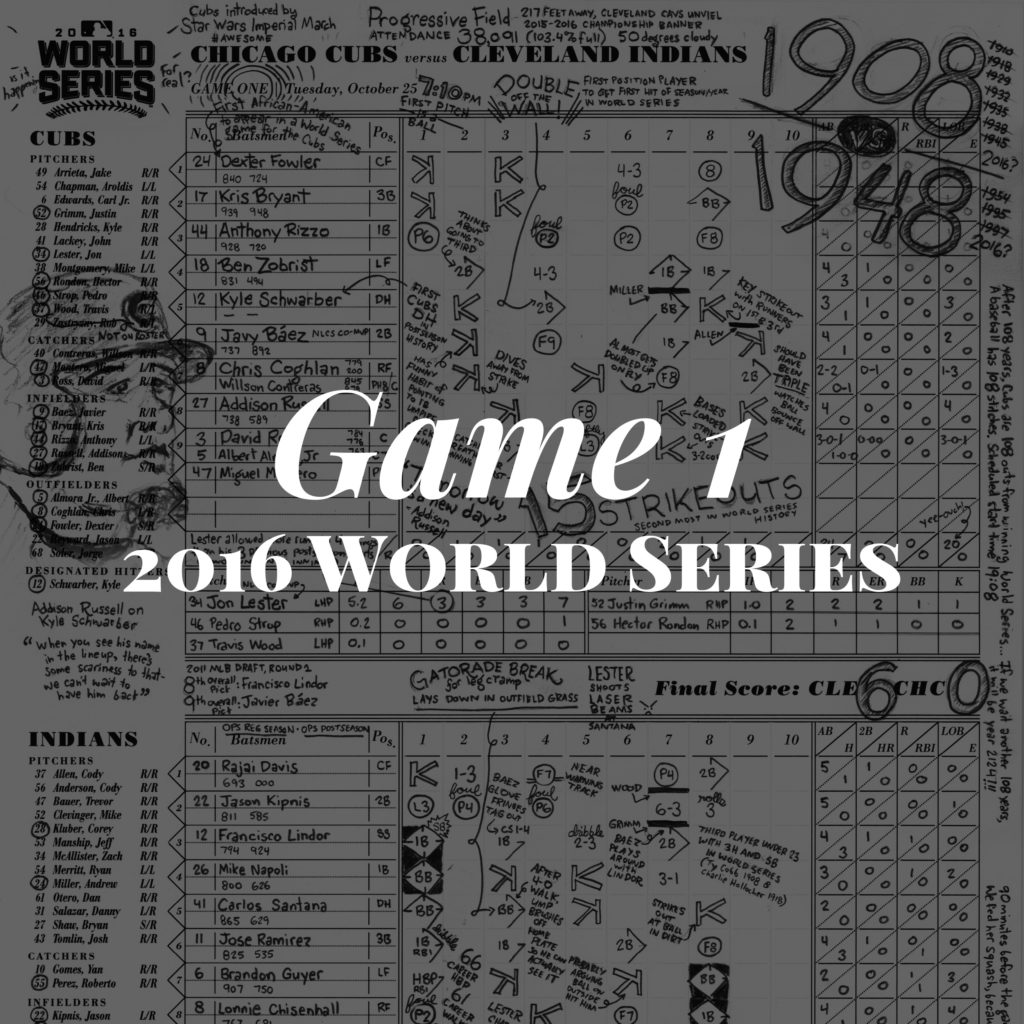 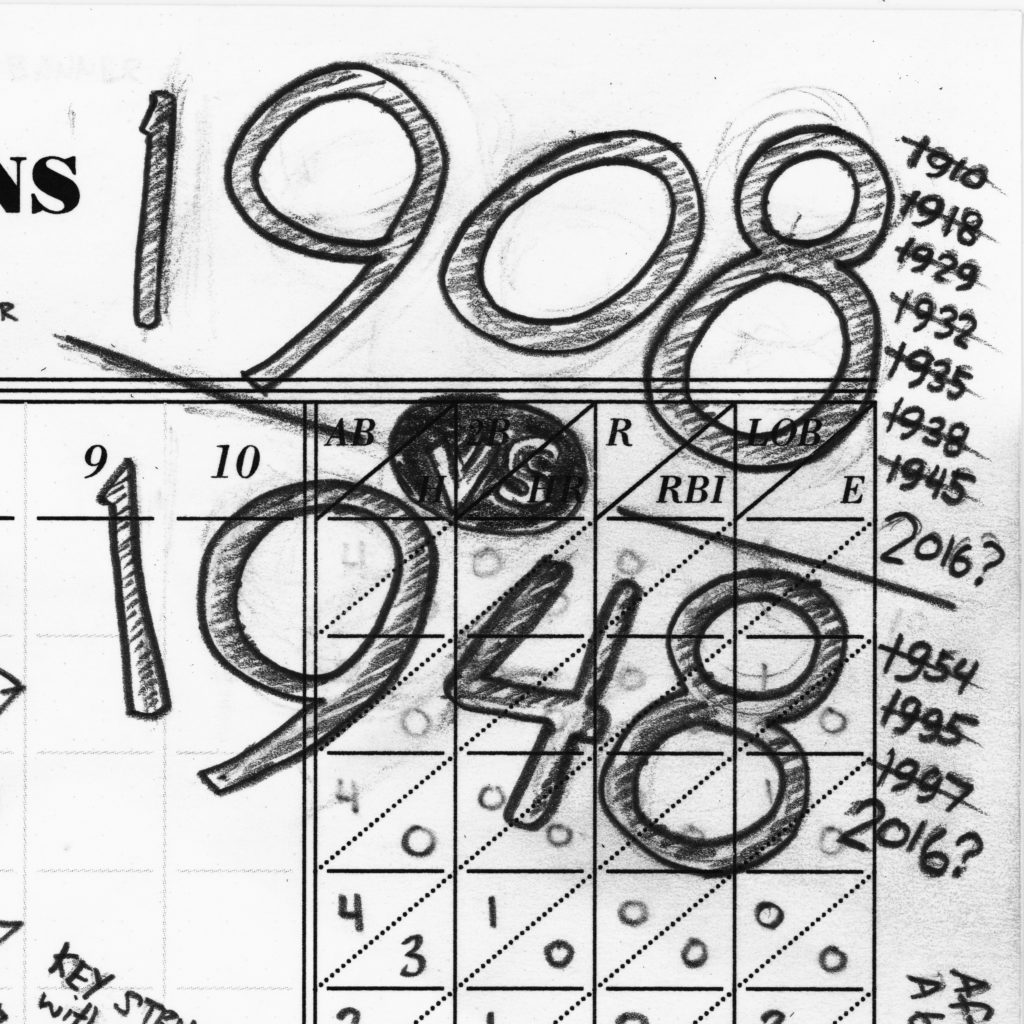 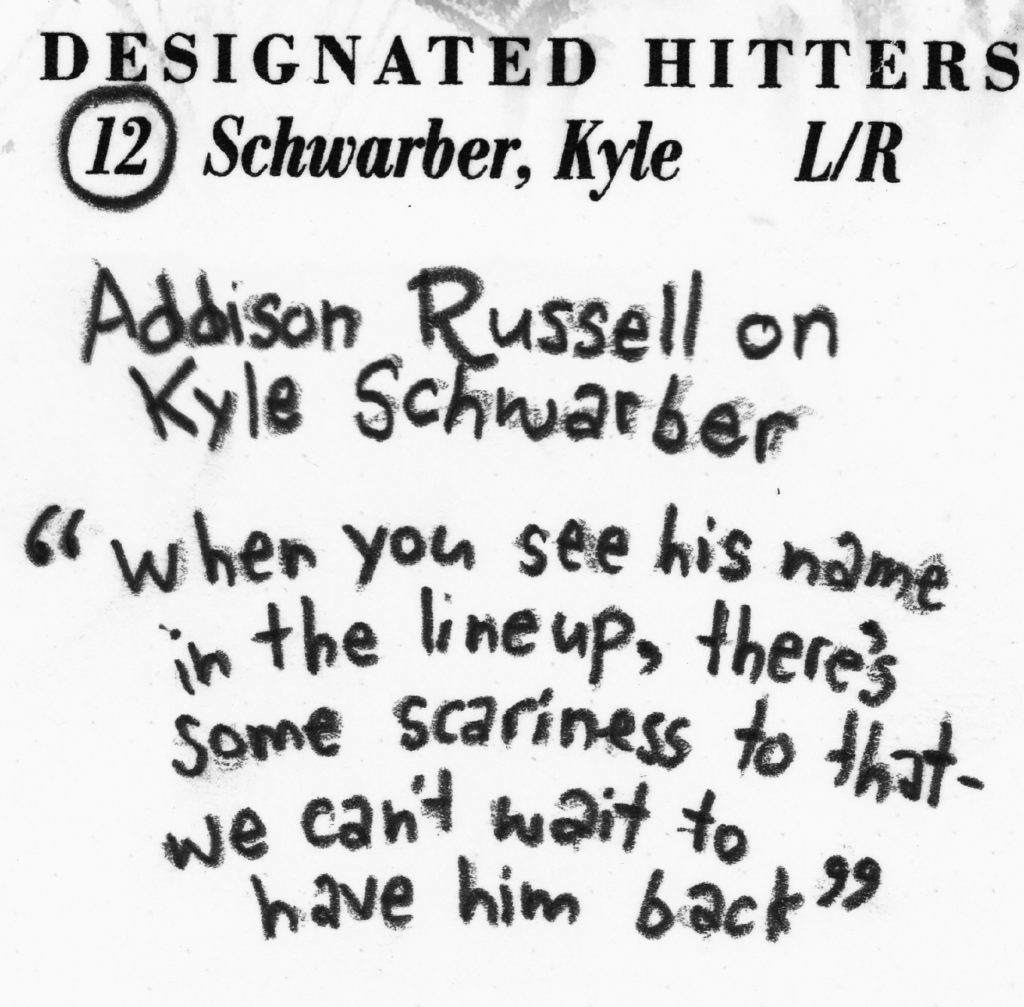 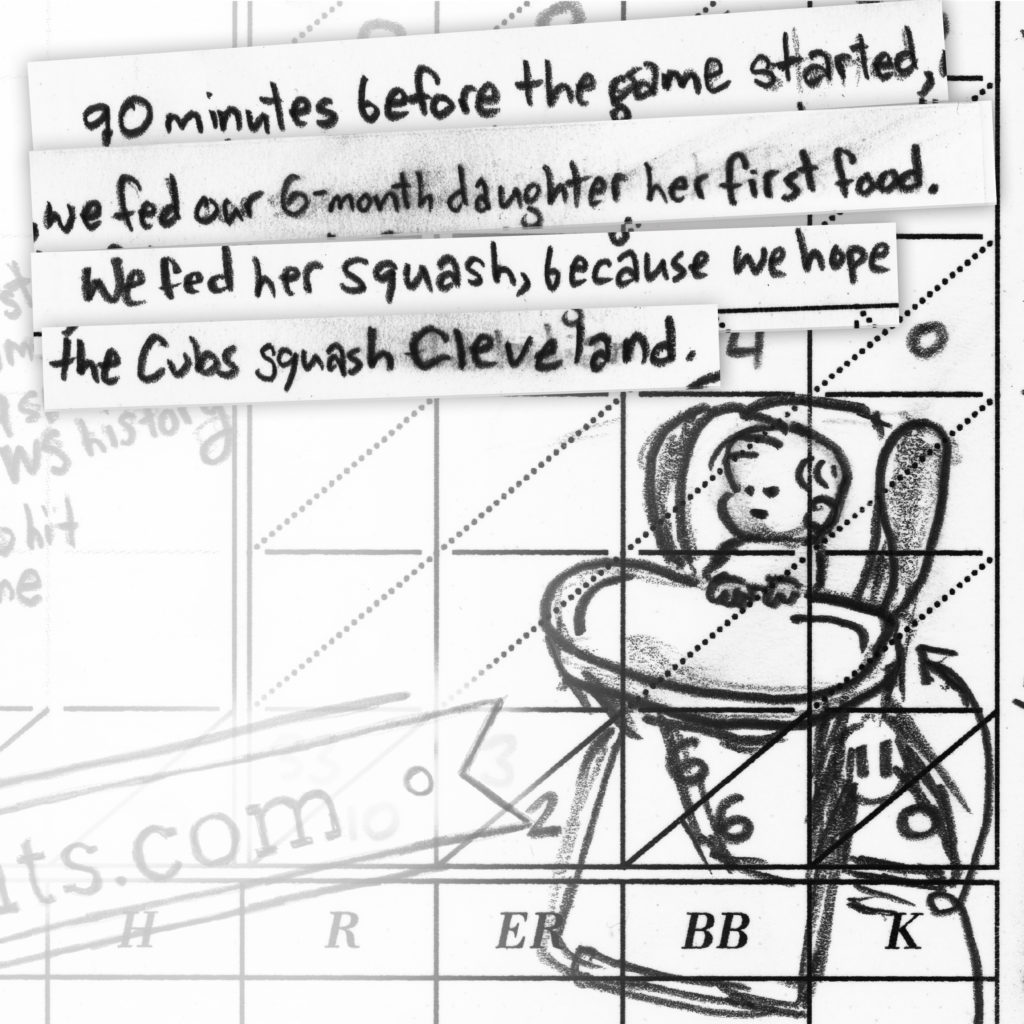