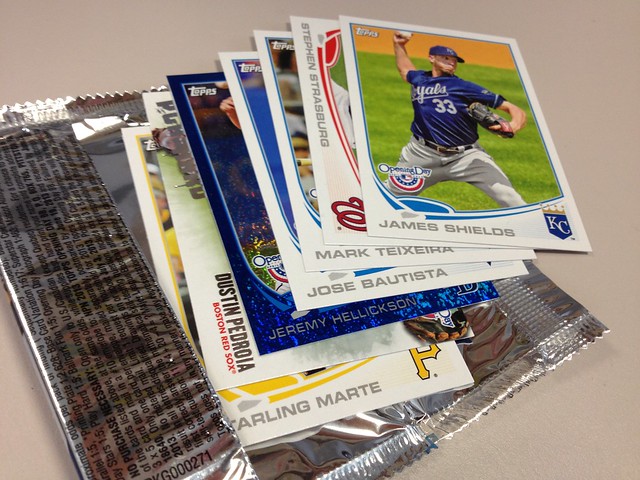 Opening baseball cards from packs gives you a chance to slowly learn about today’s baseball players. Open up a pack and take a look at each card. Analyze the photo. Read the trivia on the back. This sort of slow enjoyment is a nice alternative to today’s fast news clips and videos. 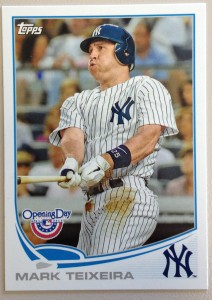 Often MLB and the media will focus on the top-tier players. How about the lesser-known players? I never knew about pitcher James Shields until I read his baseball card saying he was the first K.C. pitcher to win 15-plus two straight seasons since Kevin Appier in 1992-93.

I learned about Starling Marte by pulling his blue foil card earlier this year. And now again his regular card appears in this pack. Pulling well-known players also grants you the chance to look over their player photo. Mark Teixeira features him exhaling of a huge amount of air as though he is some sort of steam locomotive–befitting his slugging style.

We have so many options to learn about baseball through ESPN, FOX, mlb.com, blog posts by fans, twitter, tumblr animations, in-depth analysis by stat geeks; we often relegate baseball cards to a collecting commodity, not a learning source.

The slow traditional way of learning about baseball players via baseball cards fits the sport of baseball itself. Traditional, slow and savored.

1 thought on “Slowly learning about baseball players via baseball cards”