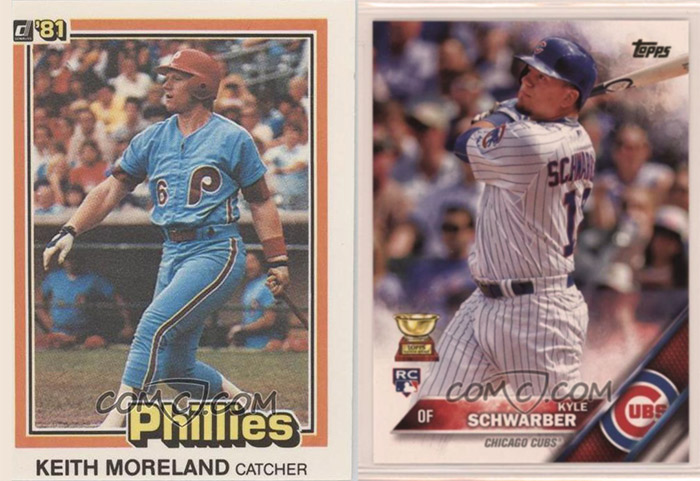 Every Cubs fan is very excited to have slugger Kyle Schwarber back in 2017. The first-round draft pick has been out for the season with a torn ACL and LCL after just two games into the 2016 season.

We all awed and oo’ed at Schwarber launch a playoff homerun ON TOP of the Jumbotron at the playoffs in Wrigley Field. I saw it in person. Initially I thought it was just a REALLY high pop-up, but that ball had distance as well as height. It was incredible.

With that Shwarber-bomb the Cubs outfielder/catcher etched himself into team lore. What will Schwarber do in the 2017 season? How many rockets will he launch?

A critique of Cubs players who went bust included Keith Moreland. This description eerily reminded me of Kyle Schwarber.

8. Keith Moreland, RF, 1986: .271/.326/.384 (156 games)
Moreland was a pretty good hitter for a catcher, but he wasn’t a good enough glove to play regularly, and he hit decently for a third baseman too, but didn’t belong there either. If you put him in the outfield pigeons would roost on him. The Cubs tried to make the best of it, moving him around and hoping the ball wouldn’t find him, and in gratitude some years he would bust out with a .300 average and 15 or 16 home runs.

Ok, we expect Schwarber to hit a lot more home runs thank Morelands 15 or 16. But doesn’t the rest of the description of Moreland sound a lot like Schwarber? Good hitter as a catcher, not really a good fielding outfielder. Even Moreland’s body type kinda reminds me of Schwarber. For his time in the 80s, Moreland was one of the slightly more heavy players. Schwarber today at 23 years old is already a big boy.

Both Moreland and Schwarber are like your All-American fratboy choice for favorite player. Moreland never lived up to great numbers. Will Schwarber follow in his footsteps? We only have one MLB season to compare Schwarber’s numbers to Morelands, so let’s look at Moreland’s first season. 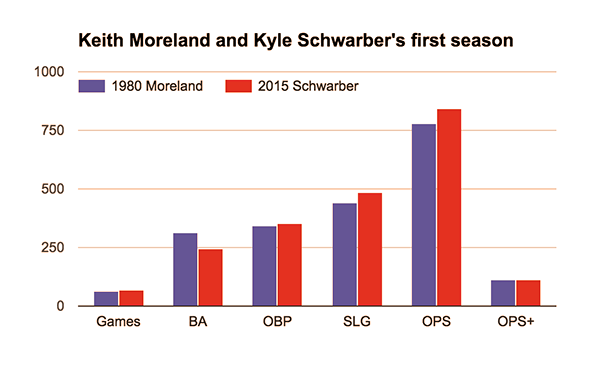 Schwarber’s rookie season matches up quite a bit with Moreland’s first season. However, Schwarber was 23, Moreland 26. So Schwarber has more room to grow. Schwarber was also the first round pick, while Moreland was a 7th round.