The first time Wrigley Field has ever seen a postseason series clinched! The Cubs won at home, defeating the St. Louis Cardinals in the NLDS series. I had the honor of being at the game, and thus, keeping a scorecard 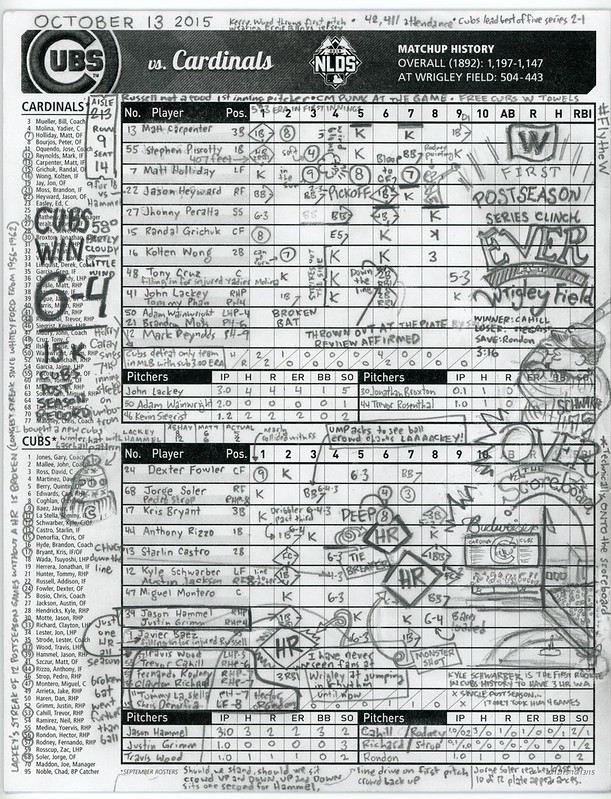 The stories behind some of the points on the scorecard 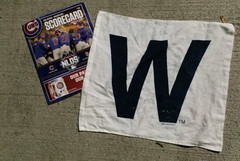 With 15 strikeouts for the Cubs pitching staff, and 3 homeruns for the Cubs, we had lots of things to whip our W towels around for. Every time the count would get to two strikes, everyone would stand up and whip the W towels.

The towels were also handy for those tense moments when ____ was on base in the 8th inning with ____ up to bat. It gave me something to squeeze.

Great tickets from my friend Abhay who won the Cubs ticket lottery. Row nine on the third base side in Aisle 213. Although we were a couple rows behind a pole that exactly blocked either home plate or the pitcher’s mound. Thankfully, our row had about six empty seats, so we were able to scoot around. And yes, six empty seats at a clinching playoff game in Wrigley. Very bizarre. But we’ll take it! 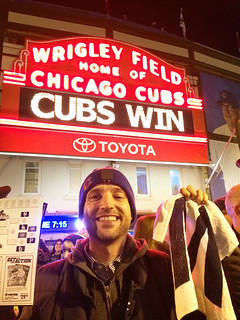 58 degrees at game time. The wind barely blew at all–the only time it really blew, was to knock down Holliday’s fly ball to center in the 5th inning.

I came dressed super warm with many layers expecting it to be freezing–as Wrigley tends to be in the 50s. I even bought a stocking winter cap to stay warm. But with the sun breaking out, and still winds, it was really nice.

After a long Kerry Wood highlight film on the Jumbotron, it was like, sheesh, that was a lot about Kerry Wood. Where is he now? Answer came two seconds later, he’s right on the field about to throw out the first pitch! Just as the day before, Sandberg wore an Ernie Banks jersey, so Kerry Wood did the same.

I have never seen fans at Wrigley all jumping in rhythm–until now. It was electric. Plus, that homerun came after the starting pitcher Jason Hammel got an RBI single up the middle with two outs. The crowd was already all amped up. In fact, for a clinching playoff game, you never really know when you should sit down. It seems like for everything you should be standing up.

But when Jason Hammel came up to the plate, it was like, hmmm, maybe we’ll all sit down. But just as Cubs fans booties slightly touched their seats, Hammel hits a line drive up the middle, causing us to jump up again.

Then you got Baez’s homerun–from a guy who had only one homerun on the season! Factor in that he had to miss part of the season because his sister died. And that he only got to start because Addison Russell has a hurt hamstring.

Plus this homerun ended Lackey’s streak of 12 postseason games without a homerun. The previous longest streak was Whitey Ford from 1956-1962.

Jorge Soler gunned down Tony Cruz at the plate. The play went under review by the umps, which was the weirdest sort of waiting-pause. The jumbotron was clearly not going to show the replay to the entire stadium, until it was clear the outcome truly matched the umpire’s call of Cruz being out. While we were all standing around wondering, the outskirts of the stadium started to cheer, because they could see the replay on the tv sets provided for those whose views are blocked by the luxury suites. Hooray for the outskirts of the stadium getting the inside scoop before the rest of the park!

At a high-profile game like this, it only makes sense for celebrities to come out.

They were showing so many celebrities on the Jumbotron, whenever they showed a regular fan, you wondered, “who is THIS famous person?”

Just before Rizzo smashed this homerun in the 6th inning, Kris Bryant hit a very long ball to the warning track on center field. Everyone was so excited when Bryant his this potential homerun to give the Cubs an extra run lead. But we were bummed when it was caught. When Rizzo hit the homerun, we were all like, “that won’t go out” but then it did! Cubs lead!

Not live of course, but they showed a video of him on the jumbotron. Moments like this are really special because they don’t show this Harry clip every single game. Singing with Harry totally reminded me of being a kid and singing with him–something we all took for granted at the time.

Joe Maddon certainly likes to use lots of pitchers. In this game a combined total of 8 Cubs pitchers were used:

In many of the Chicago Tribune photos, many of the relievers had a big smile on their face when Maddon came to the mound to replace them.

Kyle Schwarber’s monster homerun that landed ON the scoreboard

Schwarber’s scoreboard HR is like hitting a wiffleball homerun that lands on top of your house–across the street, ten blocks over. #flythew

I saw it in person! It was monsterous! The ball was shot straight up into the sky. The sheer angle of the ball looked like it would be a pop fly, but the velocity on the ball was WAY too fast. Everyone in Wrigley was amazed. The ball landed on top of the new right field scoreboard. Just the insurance run we needed!

He is the first rookie in Cub history to have three homeruns in a postseason–it only took him four games.

After the game was over, I could not stop thinking about Schwarber’s homerun. It was the highlight of the game. You’d think the clinching would be the highlight, but years from now people will be talking about that homerun and pointing to the scoreboard. The playoff game will be the mere backdrop for THE homerun.

All in all, this game made for an excellent and memorable scorecard. 🙂