The Cubs may have lost game three of the NLCS to the Dodgers, but I’m still celebrating the Cubs loss. Here are my favorite tweets from the game: 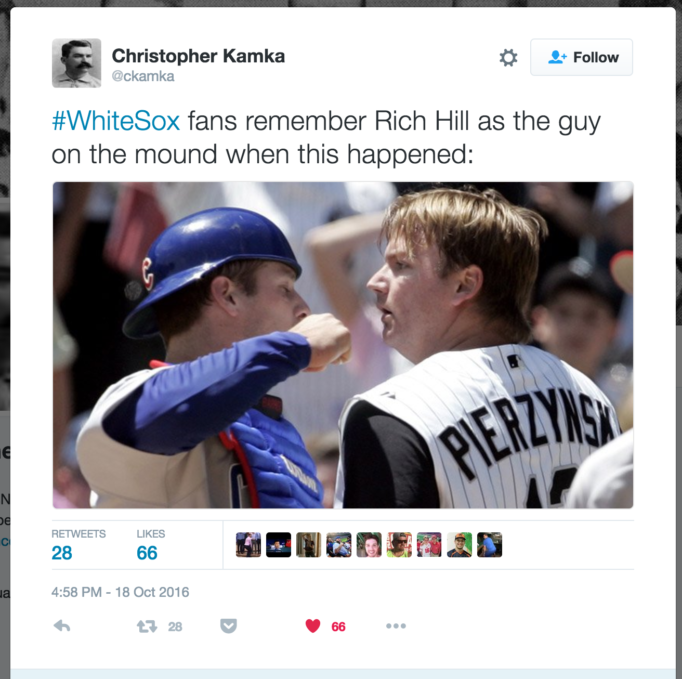 Cubbies were doing a lot of this during the game.

Yeah, bizarre how THE Rich Hill of the 2007 Cubs is the same unstoppable pitcher the Cubs are facing tonight.

Rich Hill looked like a crazy old man on the mound talking to invisible people. I’m glad someone else noticed.

A bit of a stupid joke, but truth to it in this game.

This is in reference to the Dodgers catcher claiming that Zobrist as a runner on second was stealing signs from him, and relaying it to the Cubs hitters. Uhh, ok. You guys still won that game, y’know. 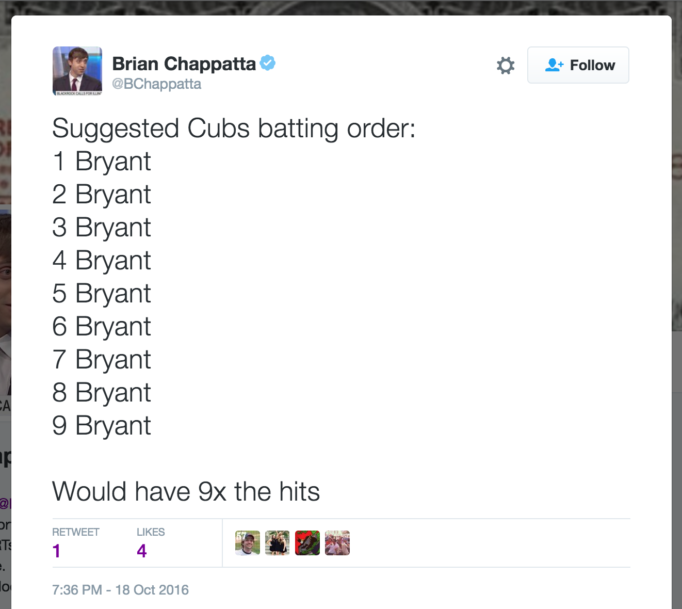 Bryant is having a decent series. Let’s clone him.

I thought the same thing! How can the pitcher not have been called on interference? Oh wait. Coughlan slid into first avoiding the pitcher.

While I don’t like crass language, this tweet got me to totally laugh out loud. There are so many of these stupid pill ads on the game! I have to get up and walk around between innings just to avoid them.

A tweet from a Dodger fan. We can all unite in our dislike for Angel Hernandez. Look out, he’s making the calls behind the plate in game 4! 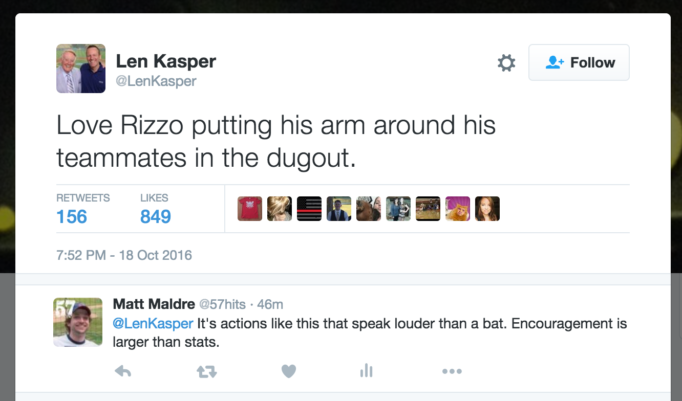 Cubs announcer made a nice observation about Rizzo, so I replied back with some larger-than-baseball thoughts on humanity. 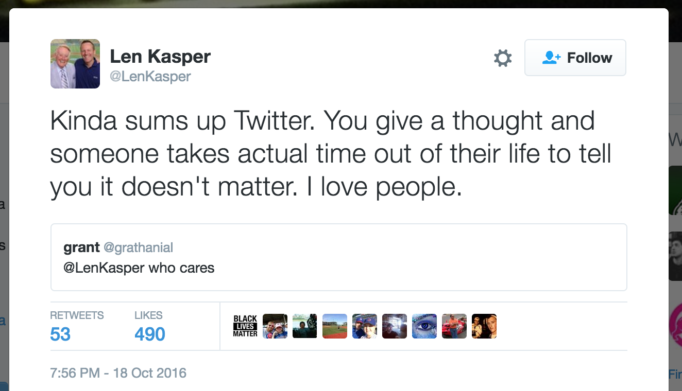 And then some schmuck has to be all jerky about Len’s tweet, and Len gets all disappointed in Twitter. #sigh

This is totally bizarre. It’s true too! Not only is the start time 19:08 (a reference to when the Cubs last won the World Series in 1908), but Fox did change the start time. The last two games had an undetermined start time, so this choice by Fox at this point in the game was rather… odd.

Báez bumpled a play to home plate–granted there was no error, and he wasn’t going to get the runner out anyways. But still.

I should have glasses, but I don’t. So I find this really amusing, because sometimes I get the score wrong just by looking at the TV.

UPDATE: A couple more tweets I found through a twitter search for #NLCSGame3

This steal was fantastic! Rizzo has only three steals for the entire 2016 season, yet for some reason Rich Hill kept throwing to first. Even Ken Rosenthal asked Rich Hill about it in the post-game interview. Hill totally avoided the question!

At the start of the game, I was wondering if that was Larry King. One time my family had front-row seats behind home plate. Back in 2005.