The Cubs incredible year as the best team in baseball has been a fun ride, because my six-month-old daughter has been able to experience it all the way. The day after she was born, Jake Arrieta throws a no-hitter against the Reds.

Julia sat on the couch while game six started on tv. We barely ever watch tv with her, so she was absolutely enthralled by the Cubs game. Leaning forward on her Boppy® Pillow, she stared intently as the Cubs shut down the Dodgers in the first inning. When Kris Bryant drove in the first run of the game, she celebrated; and then we put her to bed. Her nursery is right next door to our living room tv. I kept my cheers silent with stand-up fist pumps in the air. Surprisingly (and thankfully) my silent cheering did not wake her up.

The game was already proving itself to be a historic game, not only given the circumstances, but also that the Cubs looked like they were going to actually win it, by scoring early off baseball’s best pitcher. As the game unfolded, I wanted a physical memento of this incredible game. Before the league championship series started, my brother Erik designed custom scorecards just for this series. I had printed a couple copies just in case. Now I pulled the printout from my bag and kept score during the game.

In the previous playoff series against the Giants, Bob Costas remarked how nobody keeps score at home anymore. This comment inspired Erik to design scorecards for this series, and to keep score at home. Erik told me that he really enjoyed keeping score for the first five games. With the Cubs potentially winning the pennant for the first time in 71 years, I thought I’d keep score too.

I’ve been a Cubs fan since 1984. Now that the Cubs clinched the pennant, this is a scorecard I will always treasure. Especially since a drawing of my six-month-old daughter watching the game is on the card. 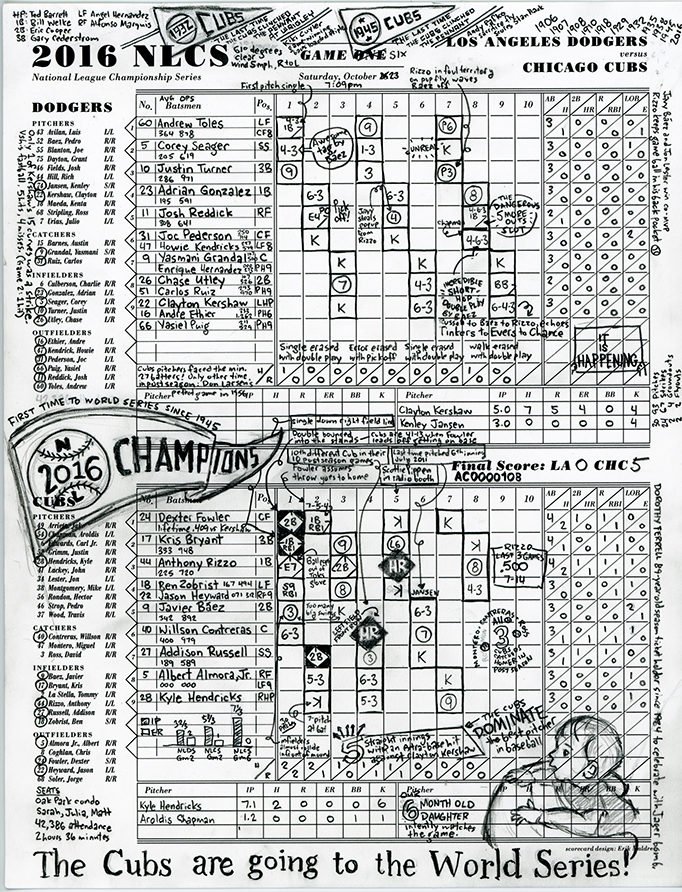 Dodgers side of the scorecard:

Cubs side of the scorecard