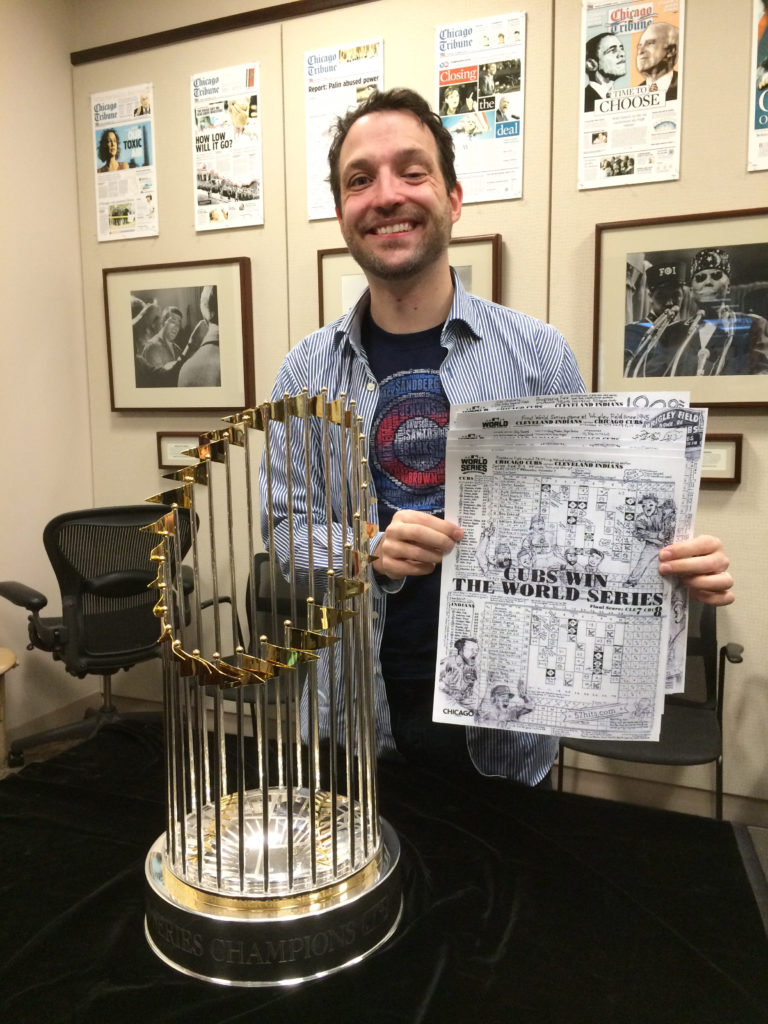 I almost missed getting my photo taken with the World Series trophy. I work from home on Tuesdays and Thursdays.

The World Series trophy is sitting at the Tribune Tower, and I was almost not there. For the past 16 years I’ve been working for Tribune Content Agency in the Tribune Tower. Whenever a Chicago sports team wins a championship, the sports trophy tends to visit the Tower for employees to take their photo with it.

Last year the Stanley Cup came to visit. I put Mr. T in the cup. 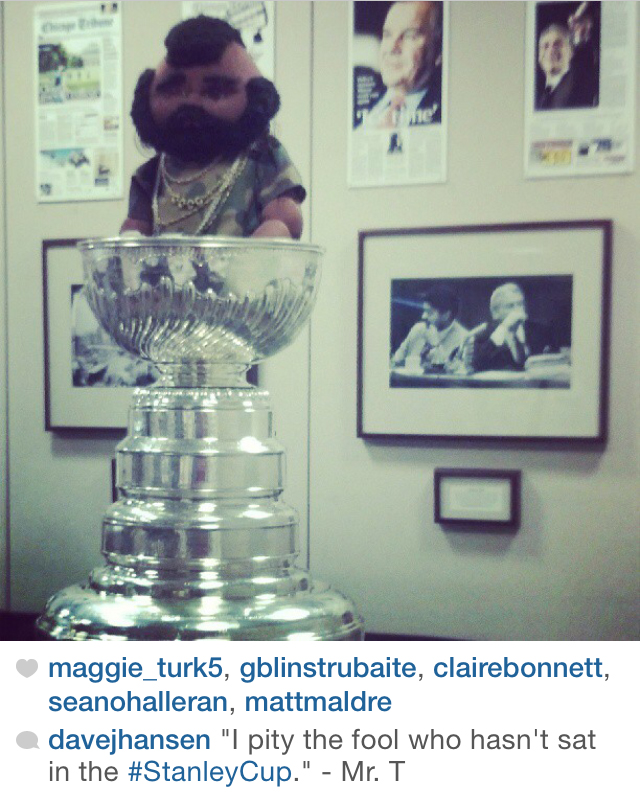 This year I’ve started to work from home in Oak Park on Tuesdays and Thursdays. The World Series trophy decided to visit the Tribune Tower on… Thursday.

I’m sitting at home in my pajamas, getting ready to work. At 9am I get an email from a co-worker informing me that the trophy will be in the tower today at 10am! WOW!

10am? That’s like one hour away! It takes me about an hour to get into work. And I’m not even dressed to go in. Oh man, oh man, oh man. I gotta hurry!

For a brief moment I actually thought about not coming in. I am not a trophy worshipper. In fact, I think professional trophies can dangerously become idols in our society.

That brief moment disappeared. Reality set in. BIG TIME REALITY. I’m a Cubs fan and I have a chance to see the World Series trophy in person at my workplace–and get my photo taken with it?! How can I pass that up?

What to wear with the World Series trophy? 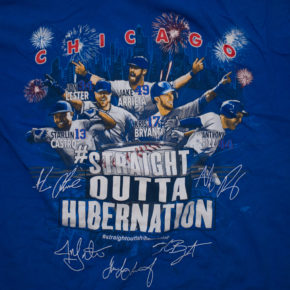 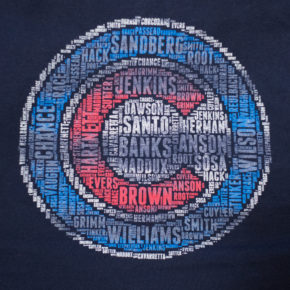 I don’t have a Cubs World Champions tshirt yet (waiting it potentially as a Christmas gift). I do have last year’s shirt. But you can’t wear LAST year’s shirt with THIS year’s championship trophy, right? That’s just weird. I also have a tshirt from 1990 with Sandberg, Grace, Mitch Williams, and Walton. But again, that’s strange. Did that team win the championship? Nope. Sorry! I do have a general Cubs shirt with the logo REALLY big, made up of all the former classic Cubs. That’s fitting! It’s not just one year’s shirt, but one for all Cubs players from all-time. So Banks, Santo, Williams, Herman, Anson, Hartnett, Tinker, Grace. Perfect.

I also throw on my blue-and-white stripped dress shirt, because I am going into work, after all. It’s also the shirt I wore to the Cubs parade.

Running to see the trophy

Looking closer at the forwarded email from my coworker… 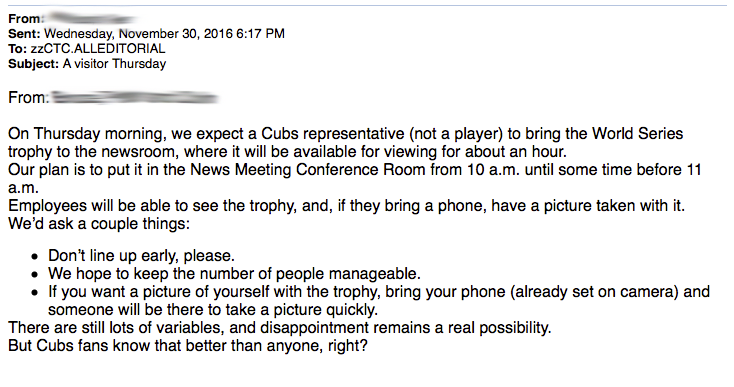 There is exactly a one-hour window that the trophy will be there. I GOTTA get into work RIGHT NOW.

My mind is racing to the things I need to do. As soon as I get into work, I need to print out the scorecards, trim them, and run one flight up to the 4th floor.

First I hop onto the Green line to commute downtown. With a moment to allow my mind to relax, I start texting my family the great news. The battery indicator was showing a low-level. The photo is going to be taken with my iPhone, and it definitely needs to be alive for the photo! Sorry family, I put my phone onto airplane mode, and placed it into my pocket.

To add to the level of craziness, on my train, a crazy man was on the train talking out loud to himself continously. Without a phone to distract myself, I sat and listened to his curse-filled stories about the importance of having someone’s back. Then the train was delayed.

When the train finally got to my stop, I flew down the stairs across downtown, into Tribune Tower. Everyone was talking about the trophy being in the house. Excitement was abounding.

The printouts of the scorecards turned out nicely. I trimmed them up, and climbed the stairs up to the 4th floor editorial room.

Waiting to see the trophy

But then the line bent around the corner, through the editors desks. Good thing that the desks were empty, because everyone was standing in the line, which bent around another corner, then curled around the CLTV recording area. Oh my!

The snaking line made it a little hard to figure out just where the end of the line was. I crawled around the line and found the end. At that point it was 10:20am. Will I make it in time? Someone came to the end of the line and announced that they are going as fast as they can, but the trophy has to leave at 11am SHARP. There is a chance we won’t be able to get in! Editors started hand-picking specific people from the line to give them quicker access. Ut oh!

Apparently, the Stanley Cup, you can touch. The World Series trophy does not like to be touched at all. Maybe there was a bad experience where one of the flagpoles broke off.

While waiting in line one of my co-workers knows the head Sports editor of the Chicago Tribune, Tim Bannon. He came over to talk to her, and he saw my scorecards and looked them over! Even though I’ve worked at the Tribune for 16 years, it’s still way incredible-cool to have the Sports editor of the Chicago Tribune looking at my scorecards!  He said he’s going to sign up for the Chicagomag’s 312 to get the pdf so he can print them out.

An employee stood at the door of the room giving the spiel every thirty seconds.

He was actually really friendly about it all. Given the situation, you can’t help but be in a super great mood!

The whole process was the most efficient thing ever. (Which makes sense when you are dealing with newspaper employees, you have to be efficient with a 24-hour news cycle).

It was pretty cool standing in the Chicago Tribune editorial board room. Pinned up on the walls is a printout of the front page for the past 14 days.

The front page for each of the prior 14 days are each pinned up on the wall. Sort of a reference for what they’ve covered recently. I’m assuming to give them a reminder to have balanced coverage of all the current news. One of the covers is Kris Bryant winning the MVP. And boom, right on the table… the World Series trophy–for the Cubs first World Series win in 108 years!!!!

The trophy was placed on a velvet blanket, carefully positioned in the middle of the table. Far enough way from the edge of the table to communicate, “Do not reach out and touch the trophy. Keep your distance.”

I stood behind the trophy and leaned over on the table to put my scorecards up closer to the trophy. The photographer in me thought, I want to make sure everything is in focus. If I stand too far back, then either me or the trophy will be in focus, not both.

Thankfully the iPhone is smart enough to do a good job at focusing. I had thought about bringing my fancy Nikon D610 camera in. But that thing is kinda tricky for non-photographers to use the focus. The iPhone captures the moment perfectly.

You’ll see in the photo I am holding all seven scorecards. While waiting in line, I fanned them out a bit, so you can see there are multiple sheets. e.g. the Wrigley Field marquee from game three shows up a bit.

This photo captures so many different wonderful things for me.

I floated out that room super excited. When I got back my work desk, everyone was showing each other their photos. I commented on the incredible efficiency of the photo line. It was like a super-speed line to visit Santa. Indeed, everyone coming out that room was so happy, just like a kid that saw Santa Claus.

Only this isn’t a mythical creature, this is the trophy that Cubs fans has waited 108 years for. We just saw it with our own eyes. It’s real!