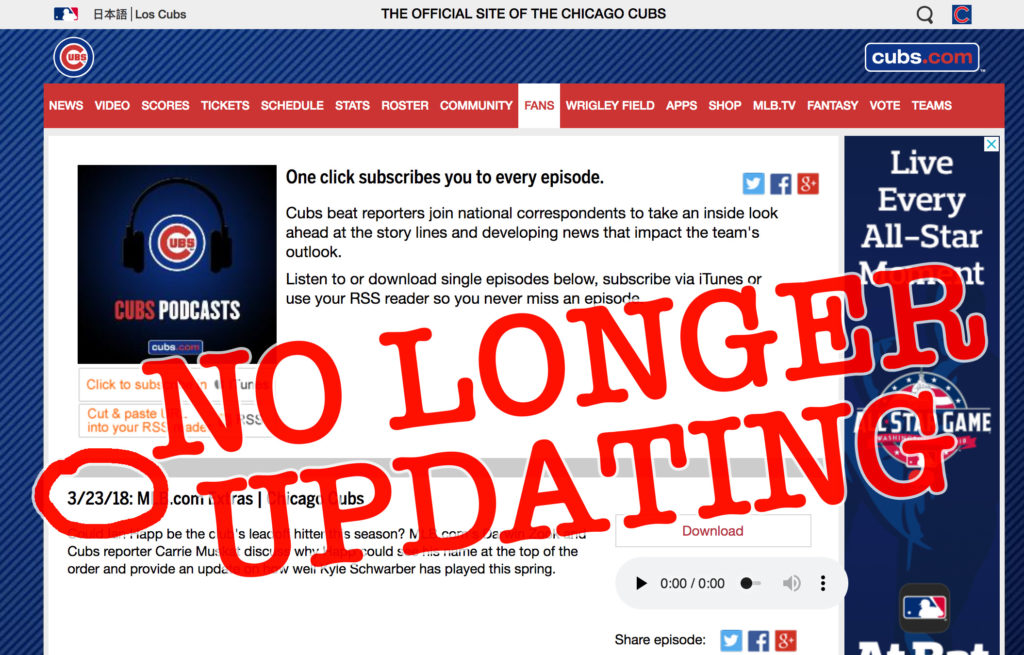 The Chicago Cubs official podcast was great. The official Cubs beat reporter, Carrie Muskat, would give great insight into the team. They aren’t super long—just 7 to 15 minutes. The perfect length. Most other Cubs podcasts are too long. The hosts end up chatting and bla bla BLA BLA.

Carrie got to the point. But then in March, the podcast just stopped. No more updates. I’ve tried looking around online for a reason why there are no more podcast episodes from the Cubs. But I haven’t found anything. No explanation. Just nothing.

A total of 14 MLB teams haven’t updated their official podcast since the end of March.

Podcasts are increasing in popularity and becoming more and more mainstream. Compared to other professional sports leagues, the MLB tends to be on the cutting edge of technology trends. MLB would license out their video service to other sports leagues. So you’d think MLB would be totally wanting to keep up with the podcasting popularity.

Or maybe the MLB podcasts weren’t popular. MLB didn’t want to spend the money producing them.

There are 16 teams that do continue to produce their podcasts.

Each of the team’s podcasts no longer use the “MLB Extras” name. Instead, each has their own format and name. As of today, July 5, 2018, here are the most recent podcast episodes from the teams that are continuing:

It’s a little unnerving that the Cardinals—of all teams—are updating their podcast, but not the Cubs. 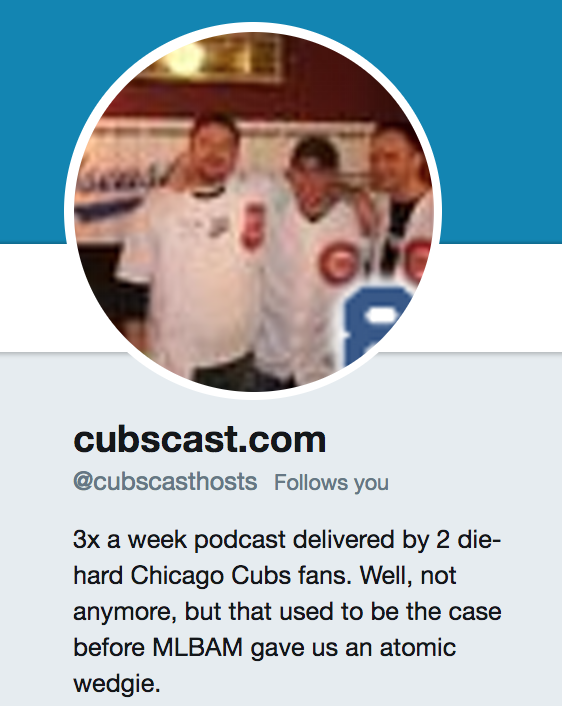 What really disappoints me is that in 2010 the Cubs forced fan-created Cubscast to end. As @CubscastHosts twitter bio states, “3x a week podcast delivered by 2 die-hard Chicago Cubs fans. Well, not anymore, but that used to be the case before MLBAM gave us an atomic wedgie.”

From 2005 to 2010, the Cubscast guys produced the best sports podcast ever. With over 600 episodes, I loyally listened to them every week. They made me a better Cubs fan. But the Cubs shut them down.

I’m not sure when the Cubs started to produce their own podcast. The iTunes store has 278 episodes dating back to September 9, 2015. Carrie Muskat appears to be in most of the episodes.

Archive.org has a record of the official Cubs podcast going back to 9/9/2014. Carrie had a great run of around three or four years.

Now that the MLB or the Cubs are no longer producing an official podcast, maybe they’ll hire the Cubscast guys to continue their great work.

But why did half of the MLB teams stop producing their podcasts in March? If you have any insight or theories, please leave a comment.