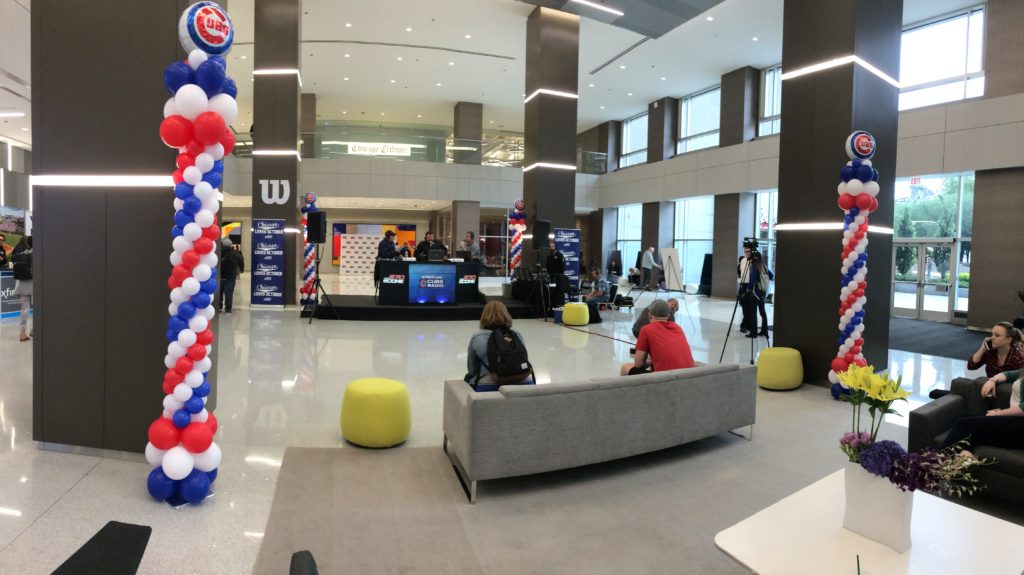 670 AM Score’s offices are in my building at the Prudential Plaza. Today they doing a Cubs postseason rally in the lobby from 5am to 6pm. 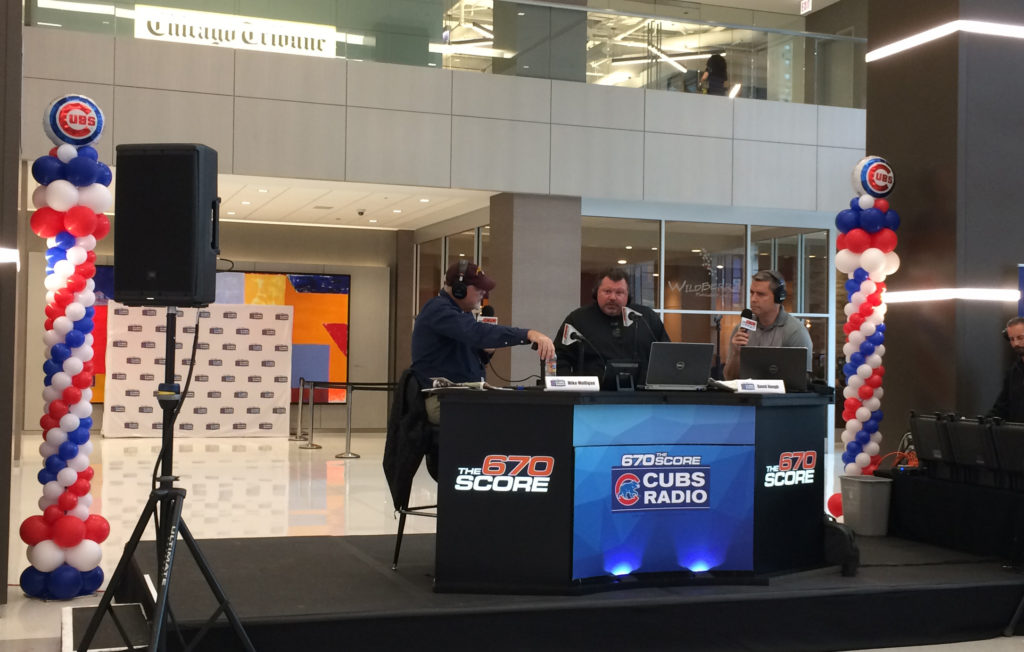 I walked in this morning and Ron Coomer was doing a show, sitting at a table in the middle of the vaulted lobby.

Coomer was profusely sweating while doing the show. At one point he had to take off his headphones. His World Championship ring is humongous. I watched for a few minutes and then went up to my desk. 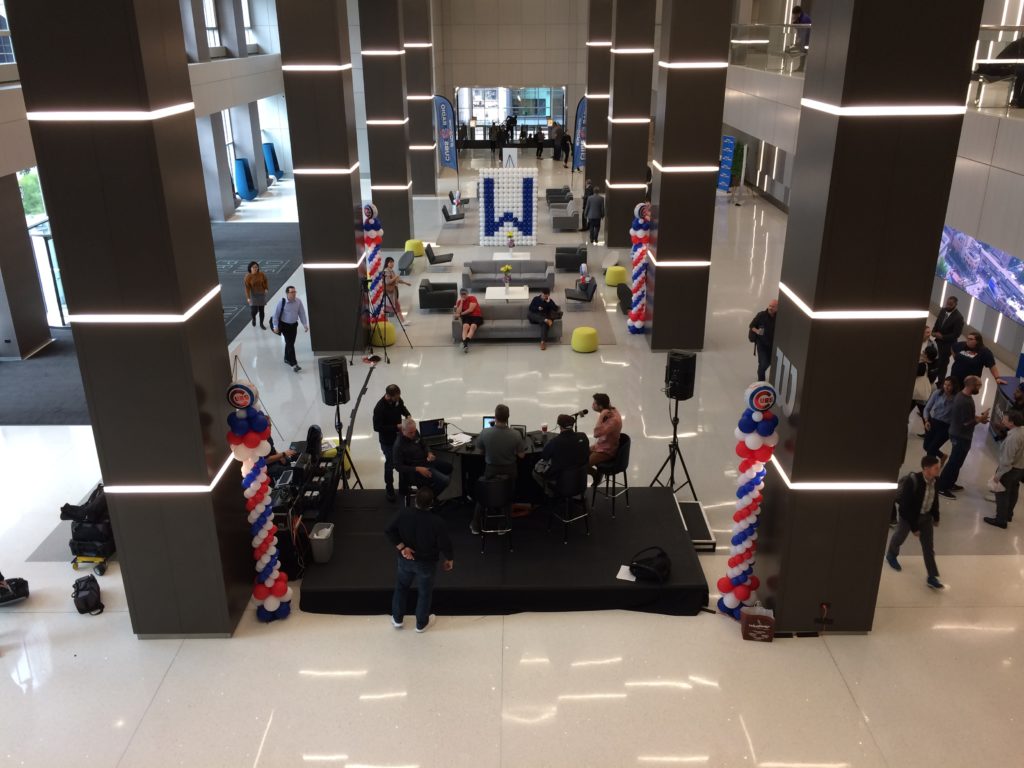 Curious to see if Coomer was still talking, I went down to the Tribune’s second floor balcony that overlooks the lobby. Coomer was finished being in the talk show. He was standing behind the table casually talking to one of the guys. I was watching to see what Coomer would do next. Would he hit up the roped-off breakfast table in the corner of the lobby? 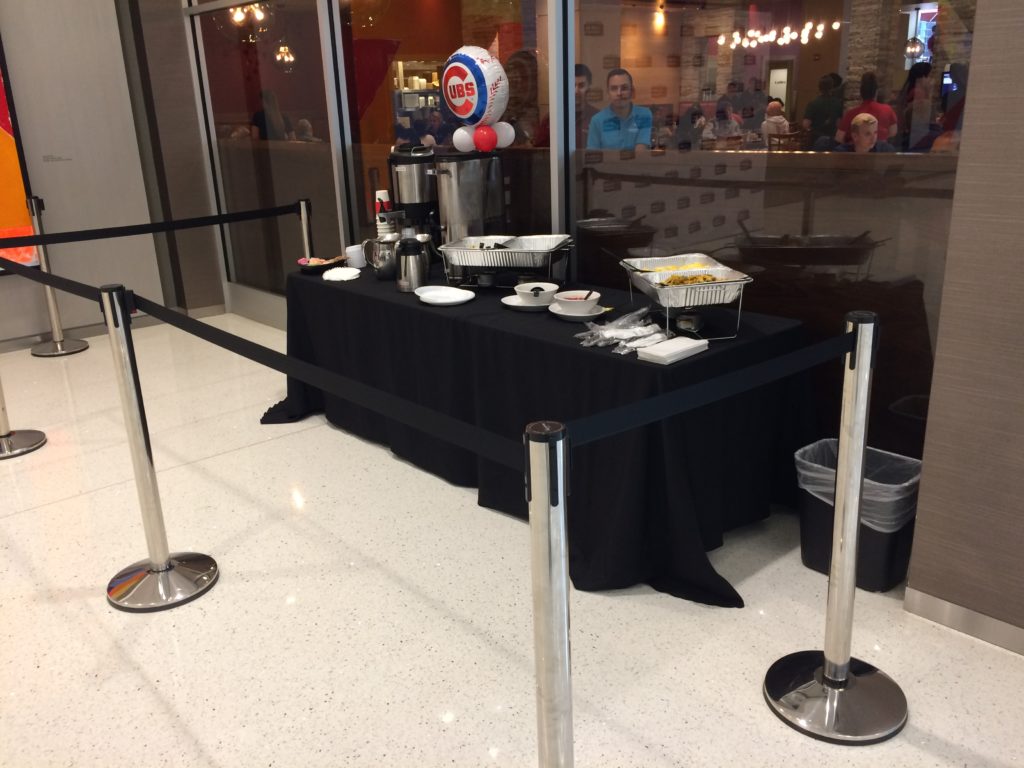 He started to walk away in the direction of the Pedway restaurants. I followed him to see where he went next. However, on my way down to the first floor, I lost track of him. So I checked out all the food places on the Pedway in the direction of where he was heading. Not at Dunkin Donuts, not at Au bon Pain, not at Starbucks, not at the restaurant with the breakfast bar. Not at the snack shop. I guess he must have gone up to wherever the Score office is in the building.

I didn’t have a pen or paper on me, so I couldn’t have asked for an autograph—if I was going to ask for one. I probably would not have asked. I was just curious where he likes to get his morning snack.

The were wrapping up the “Mully & Haugh Show”. I had to look that up. Now is the Bernstein & McKnight Show until 1pm. I looked that up too, because I don’t know who these people are. I rarely listen to talk radio, because the only time I drive is for a few minutes doing an errand. (I take the train every day). 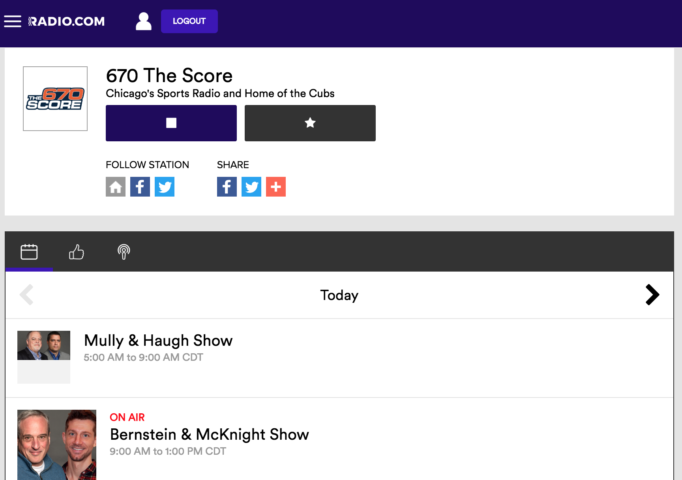 It’s kinda fun listening to it on the radio knowing they are in the lobby right now. You know what’s hilarious? This would happen every single day at the Tribune Tower, and I never listened to any live WGN talk radio while at my desk. Never in 18 years.

Man. They have a lot of ads.

I’m impressed at how little of an echo comes across on the radio. When you are in the lobby, there is a total echo.

The building management at Prudential Plaza is great! Yesterday they sent out an email notifying the tenants about the rally. Here’s a screenshot of the email. 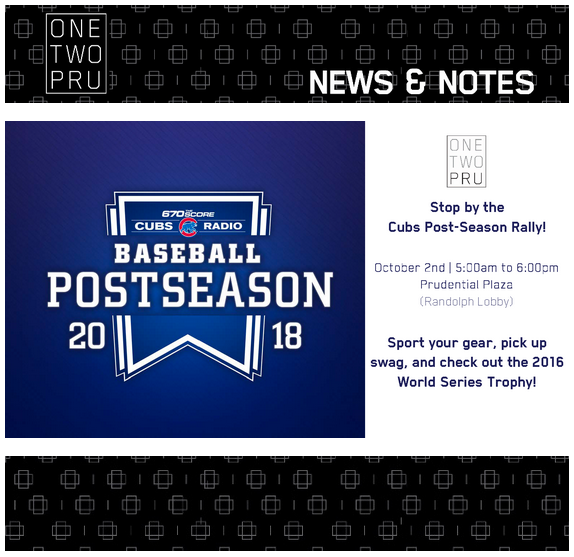 I went downstairs to take a look. Who is missing in this photo? 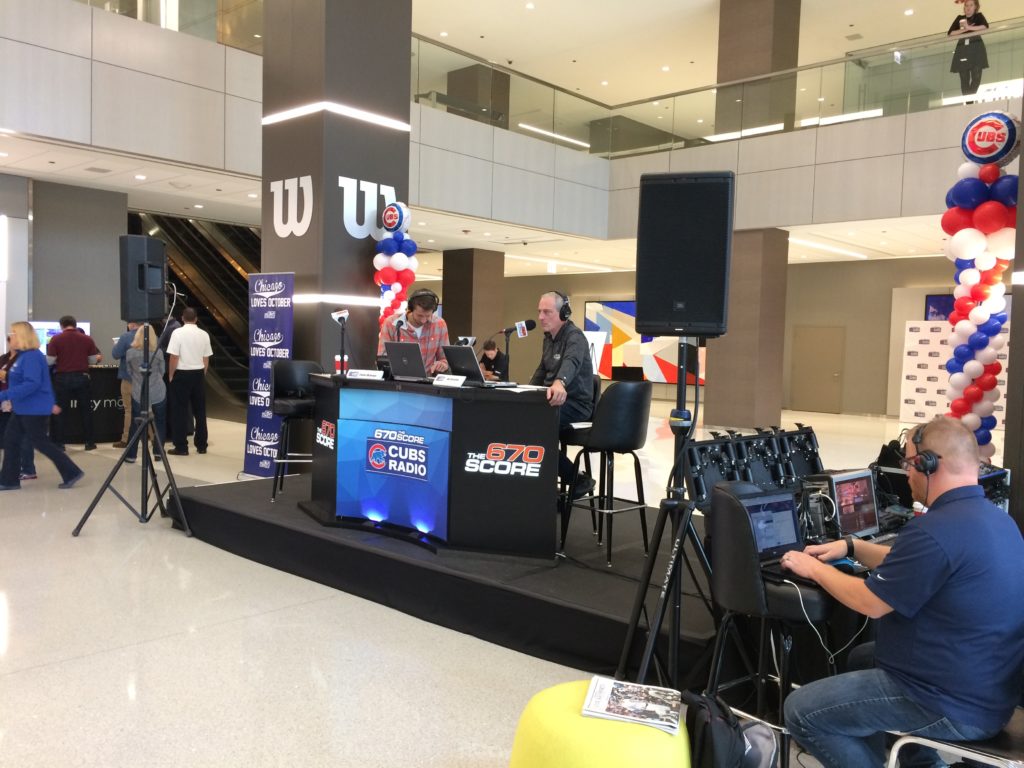 Paul Sullivan is not there. Well, the sports guys rarely ever come into the office. Even when we were in the Tribune Tower, they rarely came in.

It’s kinda neat seeing the tech setup off to the side. 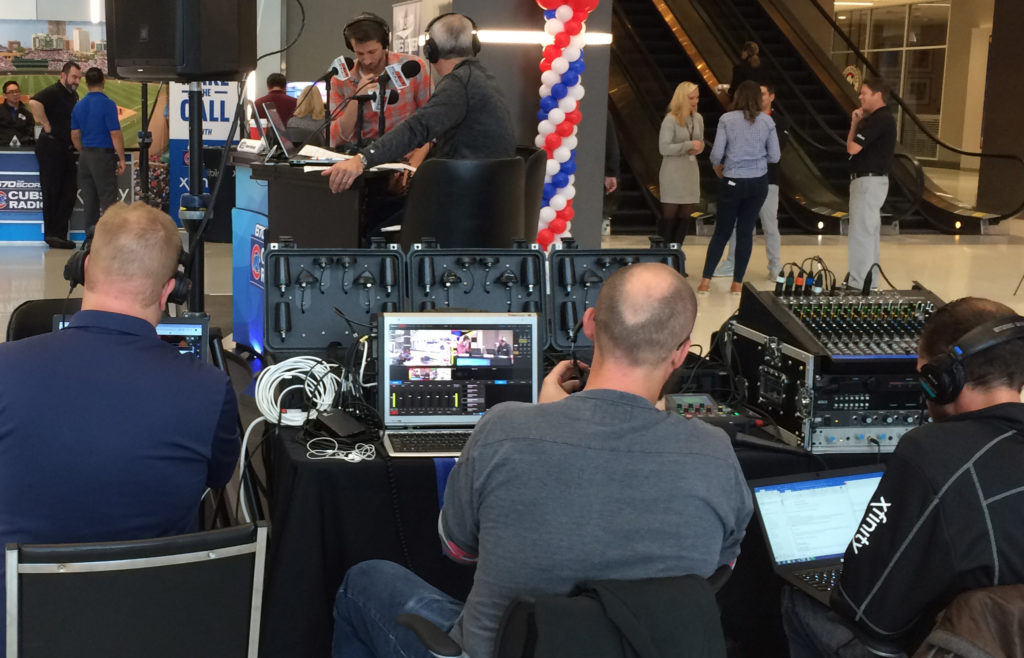 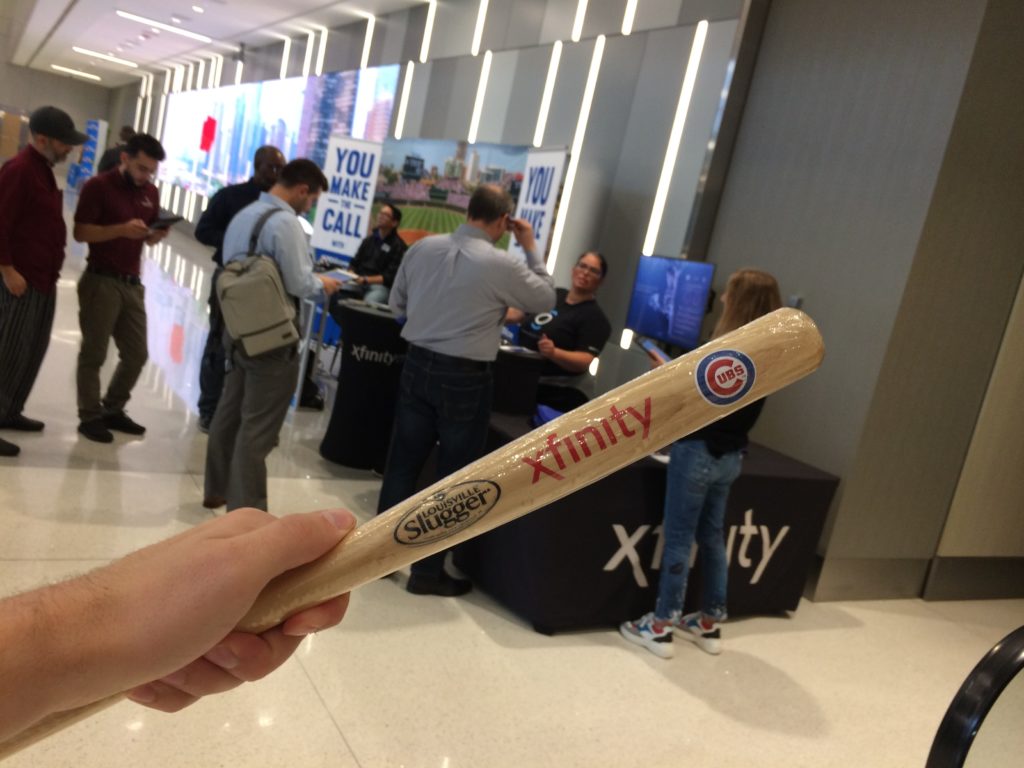 Free Cubs mini bats from Xfinity! All you have to do is fill out some survey saying what services you currently use for tv, internet, phone, and home security. And then you get to pick from a mini-bat, cinch sack, or sunglasses. I opted for the bat. You even get entered into a raffle for a 55-inch tv. Watch. I’ll win the TV. hahaha. Most like not, because I didn’t check the box on for “contact me”.

Earlier in the day The Score gave a rough schedule for the day.
Noon to 1pm: You can take photos with the 2016 World Series trophy
3pm to 5pm: Pick up a free rally towel

There’s an eight-foot tall balloon installation of the letter W. 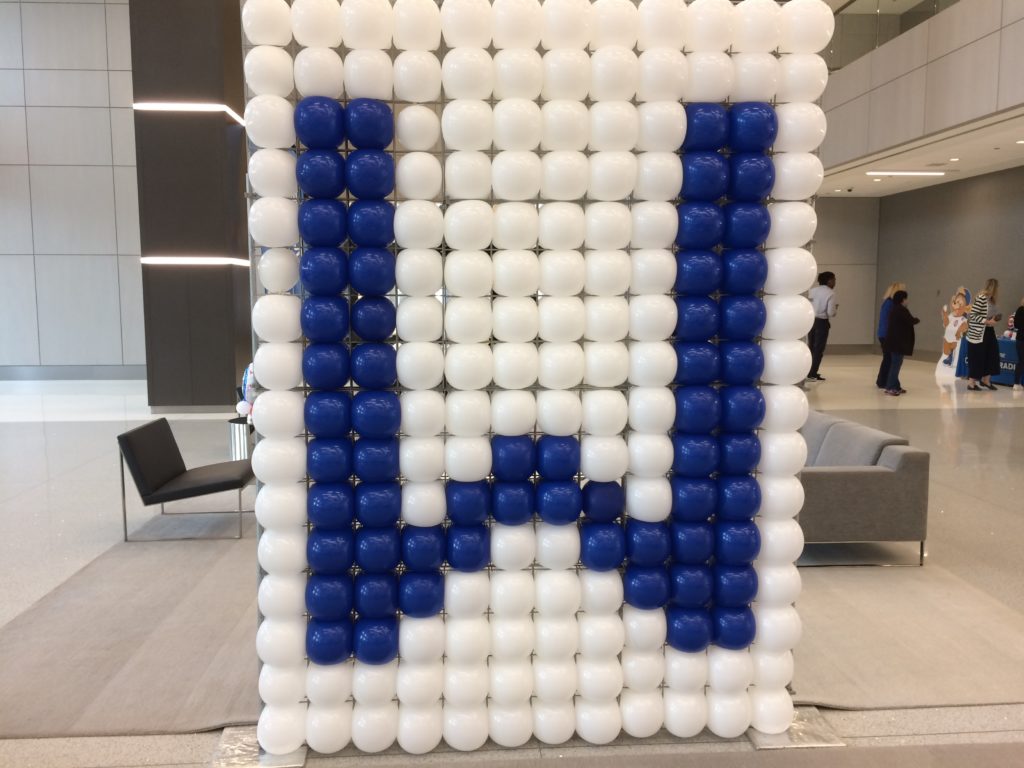 Clever how it’s constructed of balloons. 16 balloons tall by 12 balloons wide, this metal grid could be reused to make other pixel art with 192 balloons. 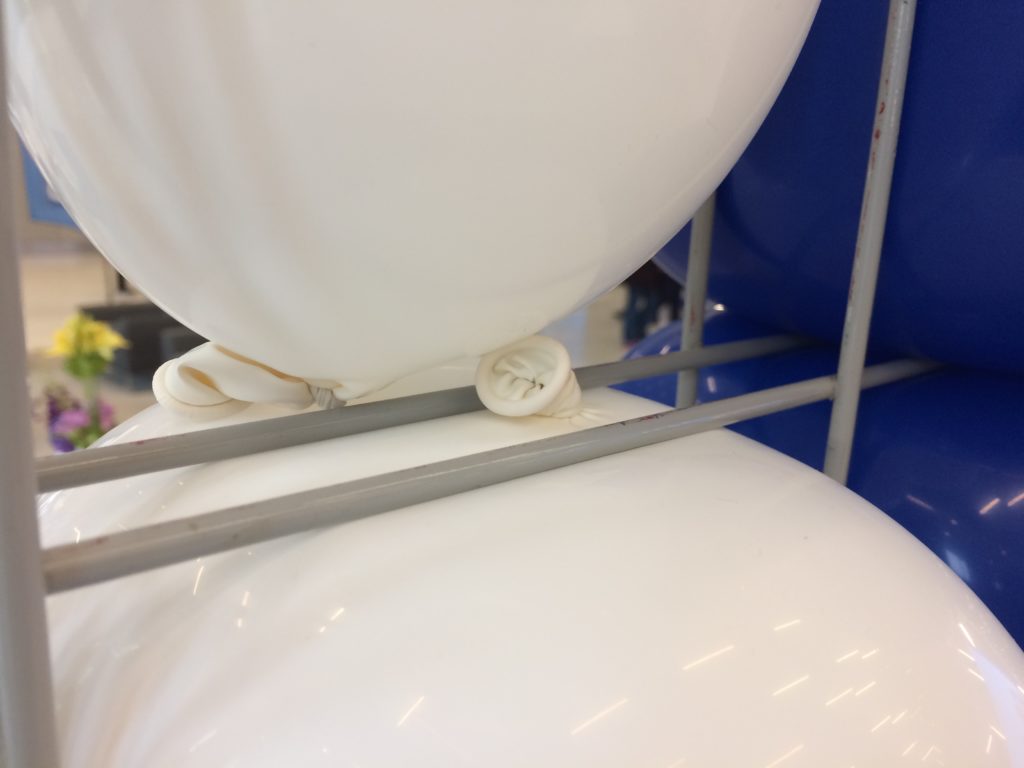 They are now taking photos of people with the 2016 World Series trophy. The line is quite long. The Score 670 photographer is prepping his camera. His photos go on their website. And another guy will take a photo of people with your own camera/phone. 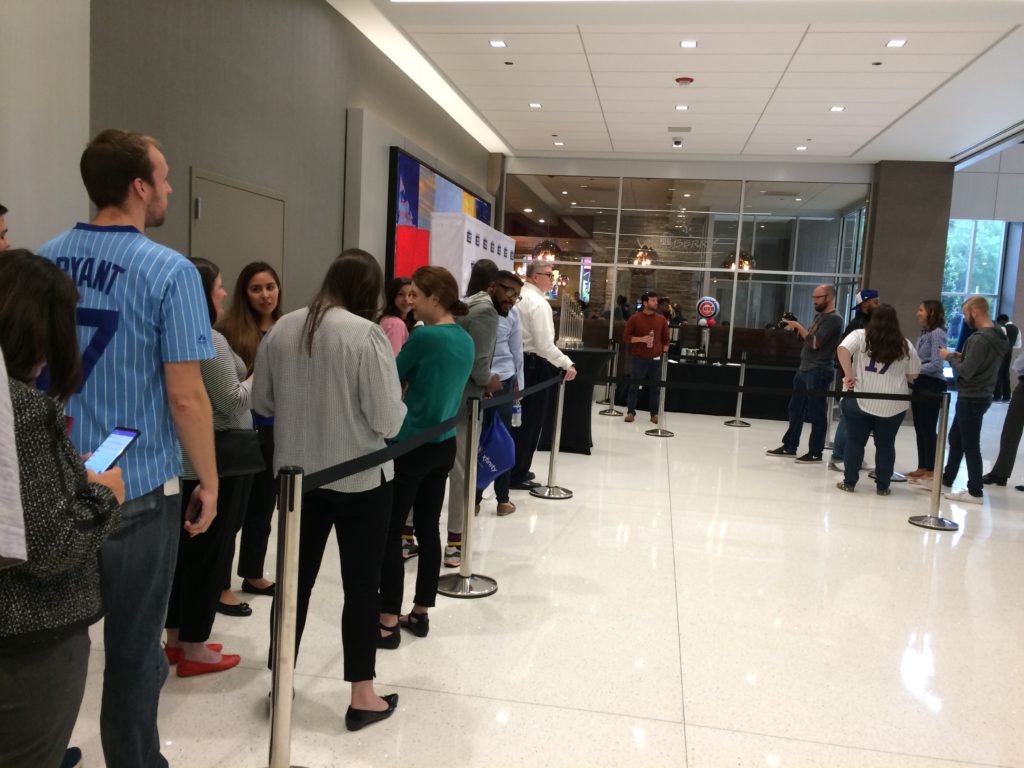 A Score employee gives us the lowdown. DO NOT TOUCH THE TROPHY. The trophy handler is there and will take the trophy away if we touch it. (he was joking about the taking away part).

The guy in the white shirt with the earpiece is the trophy handler: 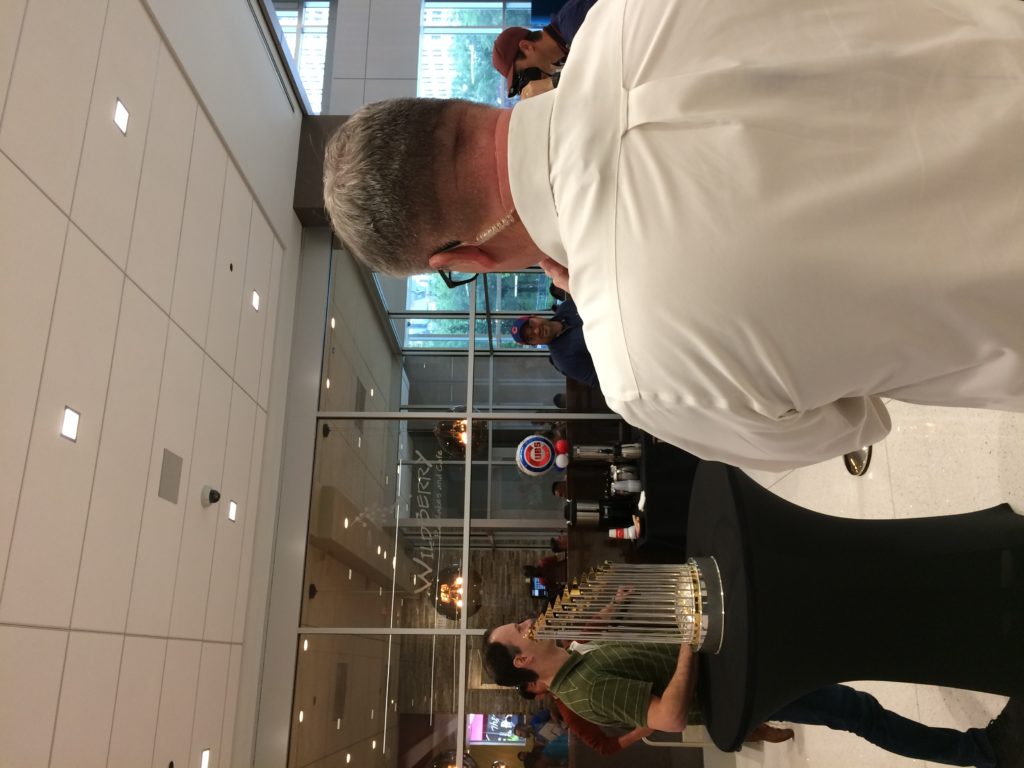 My photo with the trophy! 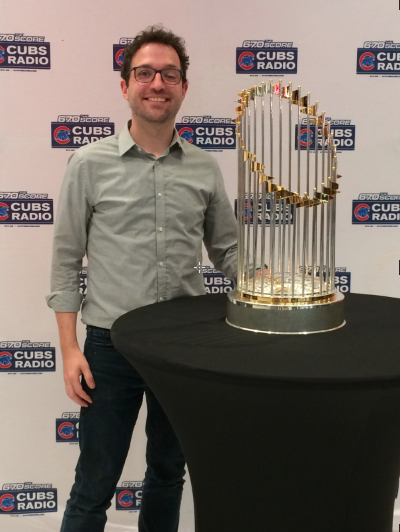 I’ve already had my photo taken with the trophy in 2016, when it visited the Tribune Tower. Last year in 2017, my family took a photo with the World Series trophy at Wrigley Field. I have enough photos of me with this trophy. But I figured, well, it’s at Prudential Plaza, our new work place. I might as well get my annual photo taken! 🙂

As soon as you get your photo taken with the trophy, a 670 Score employee hands you a bag of Fisher peanuts! Nice! 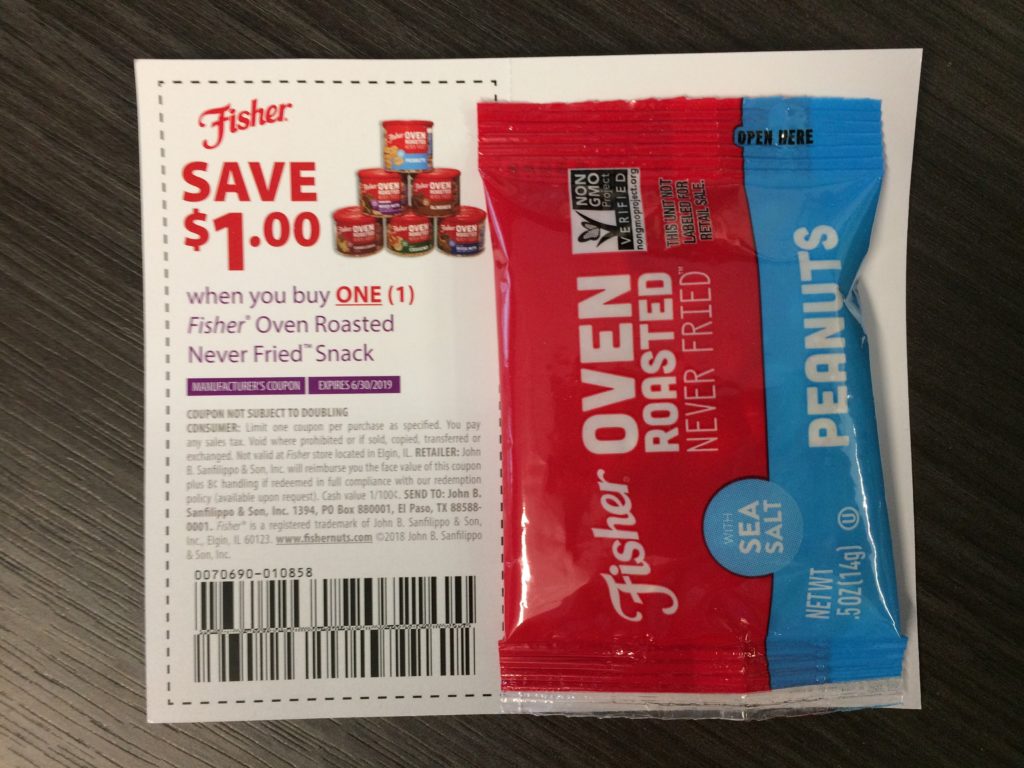 Ryne Sandberg will be at the Cubs Postseason Rally at the Prudential Plaza today. “Sometime during the 4 o’clock hour,” says the broadcast on Score 670.

Ryne Sandberg will be in the lobby for the radio broadcast for the 4pm hour. I printed out my World Series scorecards and see if I happen to run into him to get an autograph. A blue sharpie is in my pocket now.

I’m printed a second set in case he’s like, “wow, this is really cool.” I can say, “here, I have a second set here. You can keep it.” And the prints will be in a nice cardboard envelope, so he can just keep it at the broadcast desk while he’s on the radio. 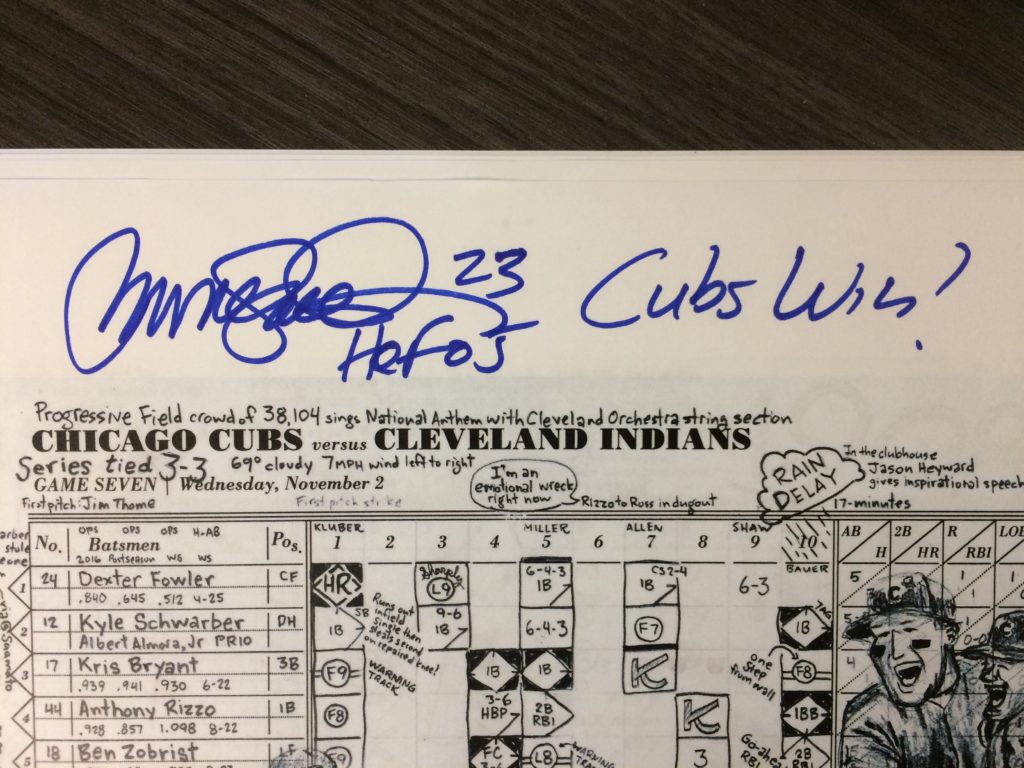 My day ended really nicely! While getting a rally towel with one of my coworkers, Ryne Sandberg looked at my World Series scorecards, and signed one for me! I’m so excited about it, that I wrote an entire blog post about how it happened. Read the full story of my encounter with Ryno.

On my way home, I walked through the lobby one more time. This particular walk was especially sweet, as the last time I was in the lobby, I was hanging out with Ryne Sandberg!

The Score 670 table continued to hand out rally towels. Initially I denied accepting another one, saying, “I got one already, thank you.” But then I circled back to grab a photo of their booth with the workers holding a large stack of rally towels. Since they really wanted to lower their pile, I took another one. 🙂 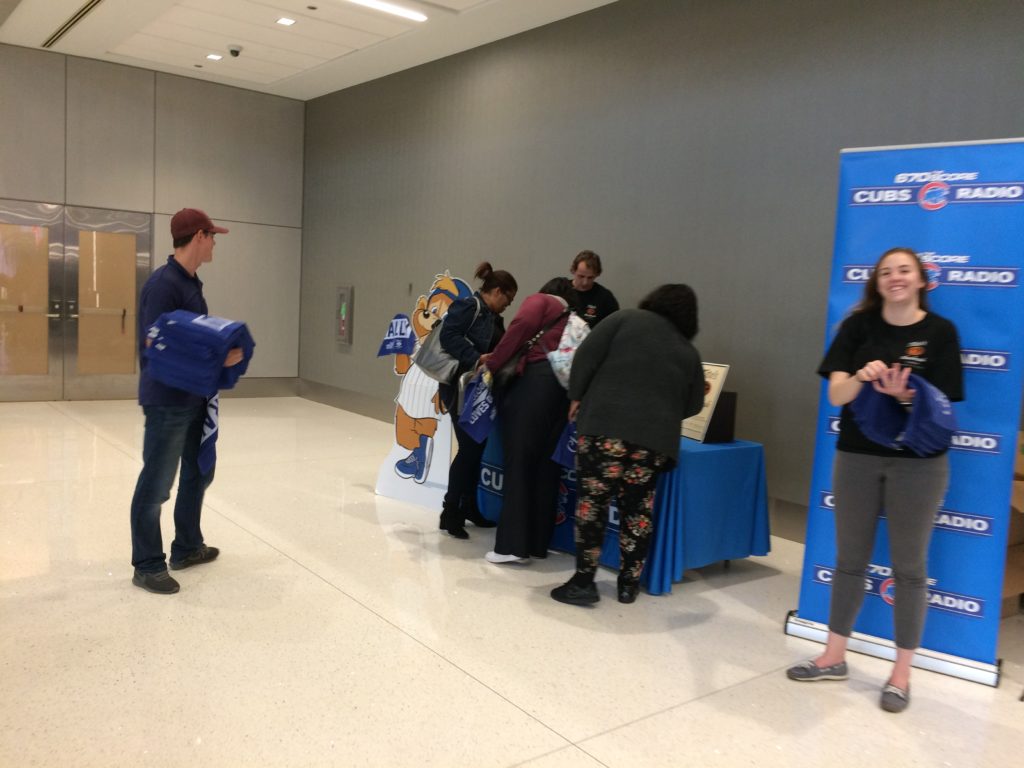