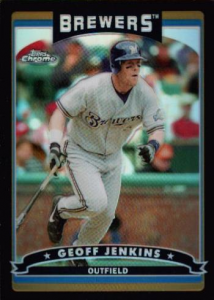 I gave up on the Geoff Jenkins Experiment.

It’s funny that Erik would even have a Geoff Jenkins strategy, because in 2005 he wrote,

i hate geoff jenkins. I would have a 13 game streak going right now if it wasn’t for him.

I had a 6 game streak going and Ge-oooff broke that. Now The day after Ge-00ff screwed things up, I started another 6 game streak. I should be at 13 now instead of 6.