Something missing from this calendar? 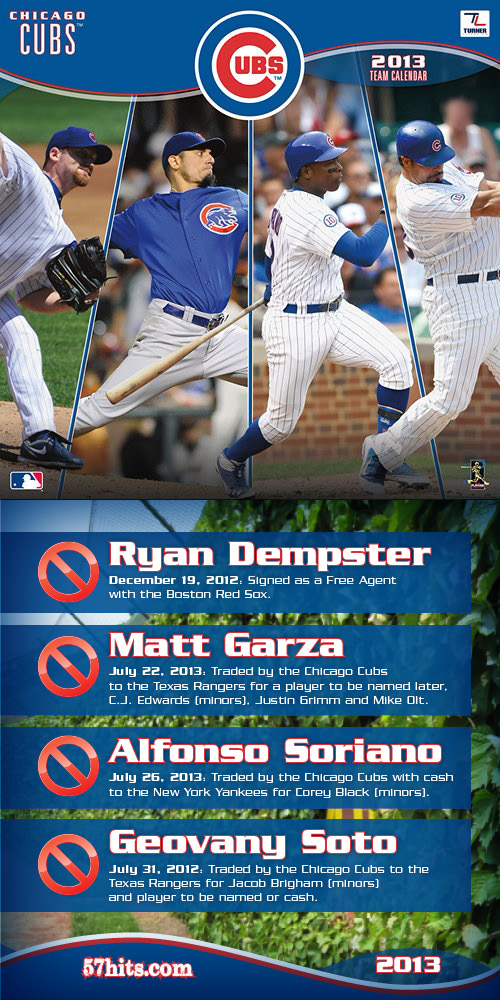 (The top part is the real calendar, the bottom is my parody of what could be on the back of the calendar)

Oddly enough, the order of the first three players on the calendar are the same order in which they were released or traded in chronological order.

Ryan Dempster
December 19, 2012: Signed as a Free Agent with the Boston Red Sox.

Matt Garza
July 22, 2013: Traded by the Chicago Cubs to the Texas Rangers for a player to be named later, C.J. Edwards (minors), Justin Grimm and Mike Olt.

Alfonso Soriano
July 26, 2013: Traded by the Chicago Cubs with cash to the New York Yankees for Corey Black (minors).

Geovany Soto
July 31, 2012: Traded by the Chicago Cubs to the Texas Rangers for Jacob Brigham (minors) and player to be named or cash.

Teams might be afraid to feature one player on the cover of their calendar. You figure that putting four players on the cover of your calendar is a safe bet in case one of the players leaves the team.

Having two of your players leave is understandable. Three of the four would be crazy. All four premiere players not being on your team is just unbelievable–especially in the same year of the calendar!