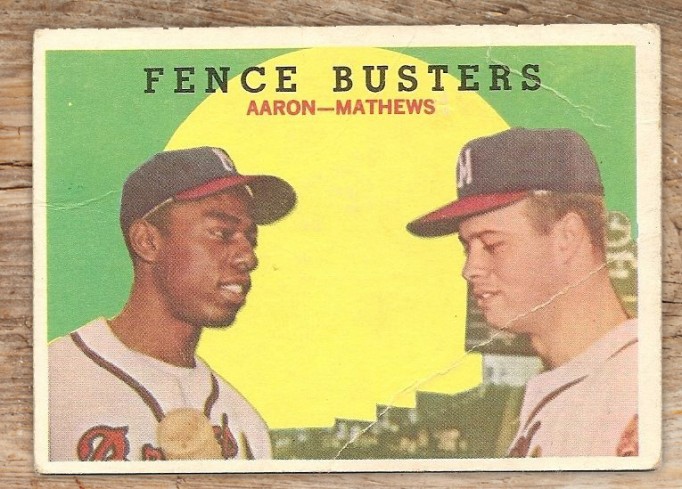 Supernova
Check out the size of the sun in this 1959 Topps card. Who knew the sun went supernova in 1958? Maybe it has something to do with the sun setting in the north behind the Wrigley Field scoreboard. Hank Aaron and Eddie Mathews don’t seem to be all that concerned. Maybe because these Fence Busters have supernova hitting powers. (Remember baseball cards cover the stats and players from the year before).

1958 was a great year. What else happened that year that would have caused a giant yellow sphere to appear in the sky?

Great balls of fire
Perhaps this giant is sun is an homage to the song “Great Balls of Fire” by Jerry Lee Lewis.  Ranked at number 36 on the 1958 Billboard Top 100.

Ernie Banks rising star
Instead of being a target for visitors, the yellow disc certainly was a target for the Cubs hitters. They lead the league with 182 homeruns, lead by Ernie Banks’ 47 MLB-leading skyrockets (next in line was Mantle’s 42 hr). That yellow disc is Ernie Banks’ star. A rising star for the six-year SS that won the MVP in 1958 and 1959. I love how Ernie Banks’ 1958 Topps card features that same yellow–especially since the yellow fills the entire background. It’s as though Ernie is posing in front of his rising star.

Frisbee
Or perhaps this yellow circle is a runaway Frisbee? “In June 1957, Wham-O co-founder Richard Knerr decided to stimulate sales by giving the discs the additional brand name Frisbee.” —wikipedia.

Northern Lights
On February 11, 1958 the strongest ever known solar maximum is recorded. NASA reports, “The Space Age was just beginning: Sputnik was launched in Oct. 1957 and Explorer 1 (the first US satellite) in Jan. 1958. In 1958 you couldn’t tell that a solar storm was underway by looking at the bars on your cell phone; cell phones didn’t exist. Even so, people knew something big was happening when Northern Lights were sighted three times in MEXICO.” Perhaps this yellow disc is the Aurora over Wrigley Field.