It’s always cool when a newspaper photographer takes your picture and then the photo makes it into the newspaper. A Chicago Tribune photographer stood a few rows behind us at Wrigley Field snapping away photos of the pre-game for the Cubs versus Diamondbacks. His mega-telephoto lens was amazing. In person they look cartoonish, like a bunch of cardboard tubes stacked inside each other.

After the National Anthem is sung, the photographer introduces himself to my dad. He explains that he got a really cool shot of my dad’s hat. He asked for my dad’s name for permission if the Chicago Tribune decided to use the photo.

I was tempted to tell the photographer that I also work for the Tribune, but I didn’t want to jeopardize any chances of Tribune using the photo. Although, what are the chances of the Tribune using this photo? We didn’t think much of it at the time. Surely this guy takes lots of photos of the fans. Our seats were nice, but not super-close. The mere fact that he photographing back in the second section of the stadium was curious. The angle must have been nice for the photographer.

After every game, I do a recap on my scorecard, enhancing it with details of the game. The Chicago Tribune and MLB websites are great sources for images to recreate scenes from the game. 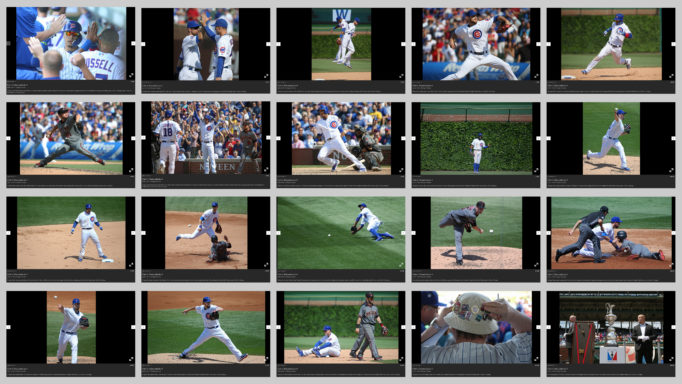 As I’m flipping through the Chicago Tribune photos for the June 3rd game, I wondered if the Tribune included the photo of my dad. The images in their gallery are in reverse chronological order—which makes for a bit of an odd experience to relive the game in backwards time. First you see all the congratulations photos, then various plays.

Clicking through a Chicago Tribune gallery takes some time, especially when there are a good amount of photos, in these case 20 photos. When I got to photo #19, there was my dad with his floppy hat covered in pins!

The photo is really nice, it shows my dad putting his hat back on after the National Anthem. His hands are readjusting the hat, while they are still clenching onto his scorecard and scoring pencil. The hat is covered in pins with the Ron Santo pin reflecting the light to gain the spotlight.

Seeing this photo in the Chicago Tribune gallery after 100% player photos is rather surreal. It’s like my dad’s hat is one of the players on the team!

At every ballgame he attends, it’s a tradition for him to get a new pin for his hat. With each pin there is a story behind the day that he got the pin. Certainly with some pins, he won’t recall when he got it. For future Cubs games, I’ll bring a sharpie with me, so we can mark the date of when he acquired that particular pin. One of these days I’m going to take a photo of each side of my dad’s hat; and highlight every pin on the hat.

The next pin on his list to acquire is the 2015 Cubs Wild Card winner. Last Friday he asked around to several vendors for this pin, and none carried it. Maybe this will make a nice Father’s day present. 😃

Since this photo appeared on the Chicago Tribune’s website, I figured there might be a slim chance that the photo made it into the print edition of the newspaper. Alas, it didn’t. Especially since the paper covering the game was the Saturday edition—a very, very slim paper.

Now, I’m just trying to get the Chicago Tribune to fix the misspelling of his name. The caption reads, “Chicago Cubs fan Matt Madre adjusts his cap before a game against the Arizona Diamondbacks at Wrigley Field Friday, June 3, 2016, in Chicago. (John J. Kim / Chicago Tribune)”. It’s pretty normal for people to spell his first name wrong. Mati, being an Estonian first name, is not very common in America. But they also got our last name wrong!

Maldre, again is an Estonian name. People often ask me if I’m Spanish, because my last name sounds like madre, which means “mother” in Spanish. To see one name typo is understandable, but to have BOTH his names incorrect is rather remarkable. I reported the error to the Chicago Tribune. We’ll see if they fix it.

For now, it’s cool to see my dad’s floppy hat immortalized in the Chicago Tribune’s photo archives. And in the future, the pins on the hat will only grow in multitude with stories to tell for each pin.