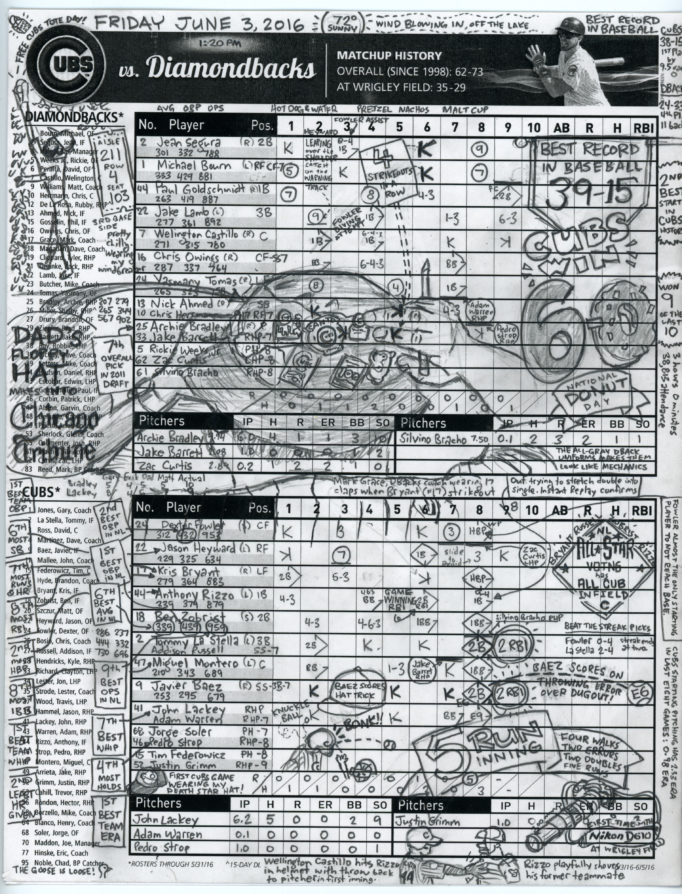 Another action-packed scorecard from a Cubs game. Simple and clean scorecards are nice, but I much prefer a scorecard that has lots of observations, factoids, and drawings mixed into the square boxes.
I always look forward to keeping a scorecard at Wrigley to create a unique perspective from the game. This year is extra exciting, because the Cubs have the best record in baseball!

Cubs leaders
In fact, many of their players rank in the top ten for league stats. Along the players names, I wrote down as much as I could find about these leaders.

Getting photographed in the Chicago Tribune 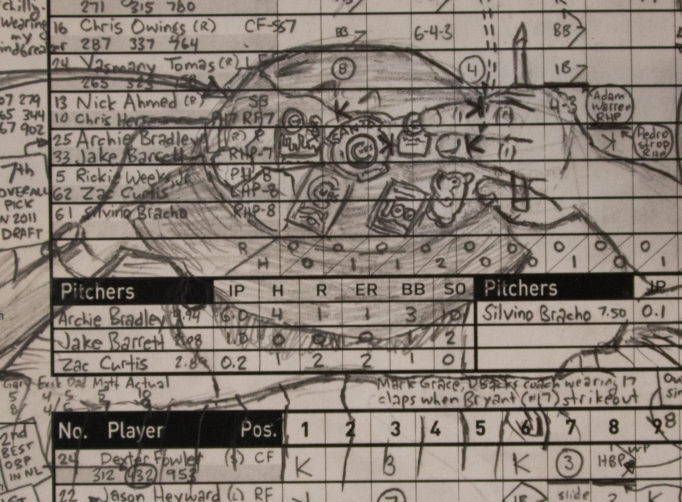 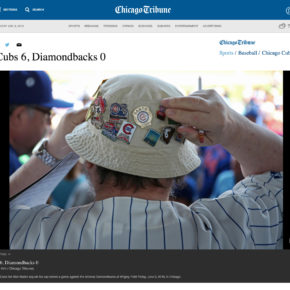 The main illustration in this card is buried beneath the Diamondbacks boxes. Once the National Anthem ended, my dad was putting his pin-covered hat back on his head. A Chicago Tribune photographer a couple rows behind us captured this moment. The image is published on the Chicago Tribune website. Pretty cool to have my dad’s hat immortalized. So I drew the photo in my scorecard. The only real empty space left was in the Diamondbacks section, because frankly, they had no action in the game, leaving their boxes mostly empty. Read the full story about the Chicago Tribune got both my dad’s first name and last name wrong when publishing the photo.

Dress warm at Wrigley
Even though it was sunny and 72 degrees, we were sitting in the shade on the third base side (Aisle 211, Row 4, Seat 103). With the win blowing in off the lake, it felt 20 degrees cooler. When going to Wrigley, always dress 20 degrees cooler than the actual temperature.

In the 8th inning they had two throwing errors. One of the throws was from second base that landed in the stands above the dugout, causing Javier Baez to score on his double. The Diamondbacks also intentionally walked XXXX-hitting Miguel Montero to get to Javier Baez. What team in their right mind does that?! I was like, PLEASE WALK MONTERO. Of course, Montero scored when Baez hit his double. The Cubs batted around the order in the 8th inning. This might have been the first time I scored a game with a 10+ batter inning.

Mark Grace is a jerk
Old “Mr. Cub” of the 90s Mark Grace. He left the Cubs, badmouthing the organization and the fans, joining the Diamondbacks as a player. He continued to speak poorly of the Cubs through the years, even as a broadcaster for Fox. Grace is now the Assistant Hitting Coach for the Diamondbacks wearing his old number, 17. Seeing the new heart-throb of the Cubs, Kris Bryant wear his old number must really get to Mark Grace. He surely must have thought his number would be retired when he was playing for the Cubs. He was the second coming of “Mr. Cub,” after all! But leaving on bad terms has caused the Cubs to never retire his number. Now the great Kris Bryant wears it.

With Bryant up to bat, Mark Grace was on the steps of the Diamondbacks dugout. How do I know? From our vantage point we could see into the visiting team’s dugout. When Kris Bryant struck out there, was ONE player in the Diamondbacks dugout clapping. That guy was the coach wearing #17. He walked away with his back to Bryant as he was clapping. Almost like all Grace cared about was seeing Bryant strike out.

I collected Mark Grace’s cards when I was in high school. A couple years ago when my future wife and I went to our first Cubs game, the giveaway was a set of Cubs cards featuring players from past and present. I had her take out the Grace card and rip it in half.

One of the things I didn’t see during the game was Welington Castillo hitting Rizzo on helmet with throw back to pitcher in first inning. Rizzo playfully shoved his former teammate, and then they had a good laugh. (MLB video) 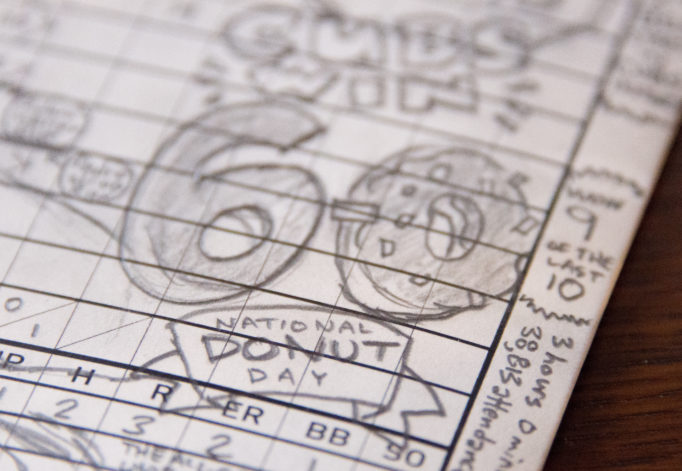 Cubs have the best record in baseball 39-15 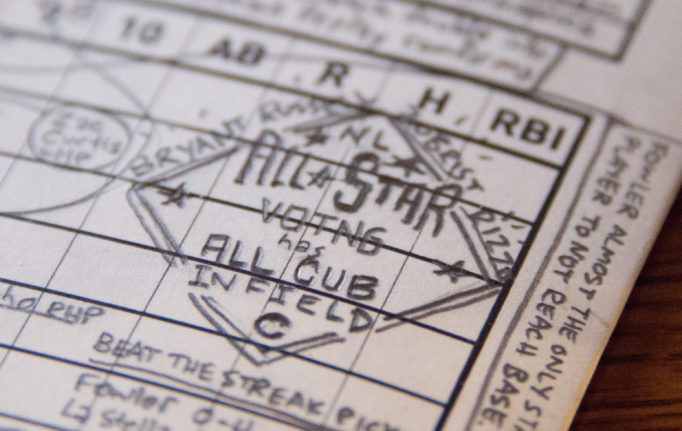 First time with my Nikon D610 at Wrigley Field

A few other highlights from the game: