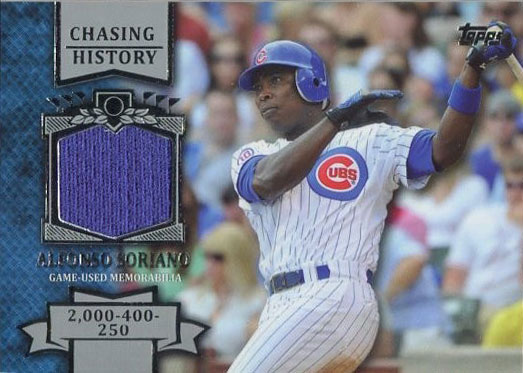 Where does Alfonso Soriano currently rank among on the all-time Cubs list? Soriano is currently on the trading block, potentially going to the Yankees. Let’s take a look at Soriano’s legacy with the Cubs.

Soriano is currently playing his 7th season with the Cubs. That’s a good amount of time to make an impact on the all-time Cubs list. He is currently ranked number 31 for at bats in a Cubs uniform.

Any of his stats above the 31st mark will show how he was an above average Cub:

As expected, Soriano ranks very high for homeruns and strikeouts. I thought he would be higher for RBIs. At first his doubles seem impressive. But when you look at how he is 97th for triples, he shows how many of his doubles were simple walk-on doubles where he didn’t bother extending them into a triple.

The following stats show how Alfonso Soriano was a below-average Cub:

Wow. I thought Soriano improved his fielding in recent years, but his WAR for fielding with the Cubs is a negative 24. Ouch. Also funny to note that he had only one sacrifice hit with the Cubs.

Is there anything in these rankings that jump out at you?

How will you remember Alfonso Soriano as a Cub?