Ichiro reaches 3,000 hits. The next day Topps is selling a card. These cards from Topps are on-demand printing featuring the latest events. 360 such baseball cards exist so far. 24 hours is the window to purchase the latest card. Last night Jason Heyward hit the game-tying single in the 9th and the walk-off single in the 13th inning. Topps is selling a card for that. 17 hours left to purchase it. Topps will only print as many cards that are bought. The quantities are kept a secret only until the 24 hours are over.

There’s a card for some Sox player’s grand slam. Mookie Betts hits 3 HR in one game, and he gets a card. It’s almost like these cards are publishing the news. Some Royal got the game-winning hit in a 14-inning game. That’s a card.

Don’t get me wrong. I think these cards are fantastic. I wish all Topps cards told you the exact day and at bat that the photo was taken. With technology these days, you can totally look at the timestamp, and I’d imagine there is a database containing the timestamp for every single MLB pitch.

The on-demand nature of these makes them rather interesting. The Royal card got only 343 printed. I just extracted all the data from these pages to sort by the quantities.

360 cards have been produced so far (with the on-demand). Four cards have hit quantities of over 4,000. 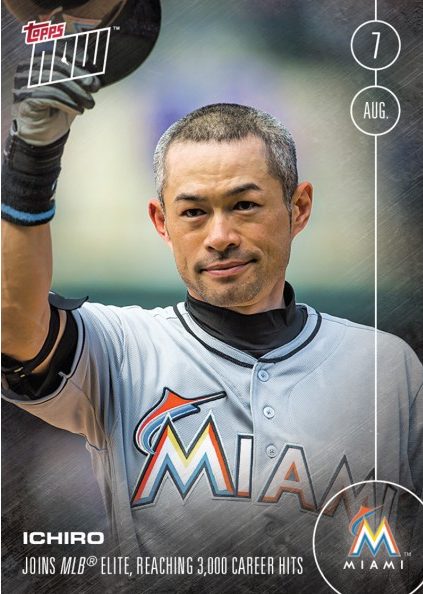 The four lowest cards are: 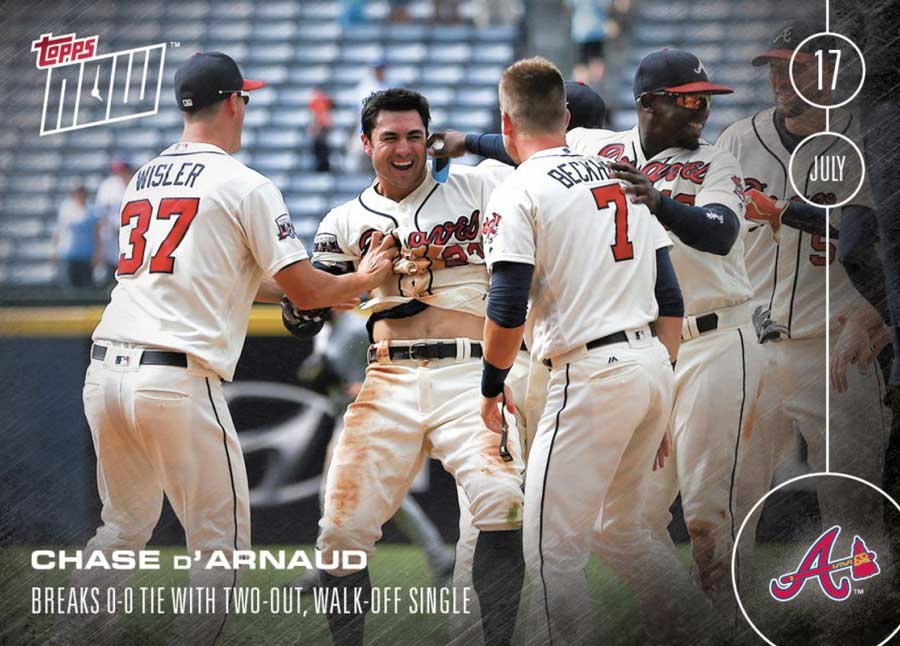 The median quantity is 402.

Does the popularity of these cards raise as the season goes on? thus, quantities increase. Or have people gotten tired of this format, and thus the quantities decrease? Answer: neither. The median quantities for each month:

Here’s an interesting wrinkle in the Topps Now cards. I was curious how the Ichiro 3,000 card was selling on eBay. In theory, since it has the highest quantity, it shouldn’t have the highest price. In fact, with so many of these cards flooding the market, it should be selling for less than $10. Lo and behold, it is selling for less than $10 on eBay. The lowest “Buy It Now” price is $6.99 with free shipping. However, I don’t think it’s the increased supply that is causing this. Rather, it’s Topps “buy multiples of this card” for cheaper that is driving this lower price.

From the card dealer perspective it’s pretty obvious. Buy a bunch of cards for $5, and sell them for $7. Especially when regular collectors see the the value of the card as $10.

If Topps foresaw this sort of market activity, it’s kind of brilliant. Topps gets to sell more cards, plus they get to please the dealers with this situation. The savvy card buyer will realize that he/she can buy the card on eBay for $7 instead of $10 through Topps. The only person that gets ripped off is the regular card collector who doesn’t research on eBay.

The Anthony Rizzo tarp catch card is currently going for $7.95 Buy It Now, with free shipping. There’s one auction where a guy has sold 27 Rizzo cards for $8.99

And if you are curious how Rizzo’s catch ranks. It’s #36. Right in between:

To put the 1,126 number in perspective. That seller on eBay who has sold 34 of his cards already–that’s 2% of the cards made! I think that’s a rather high percentage for one seller to be able to sell. Interesting that the seller calls himself “Topps_Now” has his store name as “Official Topps Now Store”

Clearly this is not official. Just read his bio talking about being a Toy Palace. Clearly, this seller used to sell toys, and then pivoted over to selling Topps Now cards. He changed his store name, but he forgot to update his eBay store bio! I won’t be buying any cards from this particular eBay seller.

Have you purchased any Topps Now cards? If so, did you get them directly from Topps or from eBay? Maybe even Check Out My Cards.