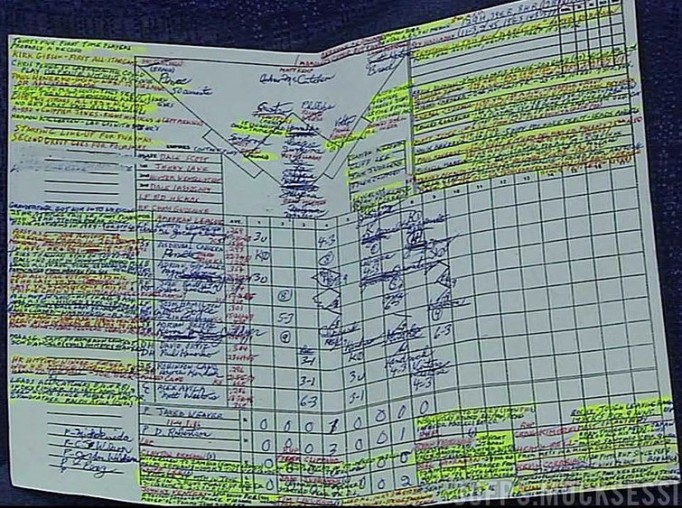 Look at the amount of annotation and details that announcer Tim McCarver wrote on his 2011 All-Star game scorecard. It’s fantastic. I’d have to say other than my brother’s scorecards and my scorecards, McCarvers is the most incredible scorecard I’ve seen.

The other scorecard expert, my brother, had this to say about Tim McCarver’s scorecard:

That is a really intense scorecard. All-star game scorecards have to be the hardest. There’s so many changes.

All Star Game scorecards are a really interesting design challenge. The first thing I would have done if I was McCarver was bring a second scorecard and use that if the game went into extra innings. For the first 9 innings I would use all that empty space on the right side.

It’s really remarkable that he used that scorecard as a tool for his broadcast. I wonder if the younger broadcasters use pen and paper for scorecards.

What do other baseball experts have to say about McCarver’s beautiful scorecard? Surprisingly every other blog out there rips on his work of art. The blog dedicated to scorecards, Squaretender, had this to say:

The All-Star game is where baseball scorecards go to die, which is what appears to have happened to Tim McCarver’s wrecked card.

Notations sprawl across all margins. Batters’ names spill over the borders of their boxes. Highlighted scribbles cover the page. Players get crossed out, replaced, and crossed out again in an endless series of substitutions.

Scoring the All-Star game is a challenge under any circumstances, but it’s nearly impossible when you try to cram as much into a small space as McCarver did.

It’s a mess. What did the scorecard ever do to McCarver to deserve this?

Here’s a tip: Next time, use a bigger card with plenty of extra boxes before getting yourself into a ridiculous situation.

We already know the MLB All-Star Game is a ridiculous spectacle that doesn’t actually mean much, even if the powers that be tell us it does. It’s an exhibition, with needless player substitutions and pitching changes all because of an “everyone plays” mentality more akin to Little League. And that’s fine, the game is what it is.

This, friends, is not a scorecard. This is, instead, a notecard masquerading as a scorecard. It is Tim McCarver’s piece of scratch paper, and it goes above and beyond the bounds of a typical scorecard.

Think of the purity of the game! How could he desecrate the sacred ground that is a baseball scorecard, creating chaos where there was once order?

This is what the All-Star Game does to mere mortals. It drives them to insanity, rambling notes and color-coded factoids.

He [McCarver] also showed us the mess of a scorecard he created during Tuesday’s All-Star Game.

Who do you side with? Do you agree with my brother and I that Tim McCarver makes really interesting scorecards? Or do you side with other bloggers who think that McCarver’s scorecard is a mess? Leave a comment below, or respond on Facebook, Twitter, Google Plus, or Pinterest.