Possible future Hall-of-Famer Miguel Tejada played 91 games in 2011, but yet Topps did not include him in their 2012 base set of 660 cards.

Thankfully Tejada came back in 2013 with the Kansas City Royals. If he didn’t, there would have been no baseball card listing the stats for his final season.

So far this year through 20 at bats in nine games, his average is .368 and OPS of .821. The Royals have him playing first, second, and third base. He’s started 3 times at third, one time at second, one time at first, four games as a pinch hitter. “He’s just a spot starter. he’s there to give the starters a break,” says baseball expert Erik Maldre.

Check out this catch in the championship game of the World Baseball Classic this year: 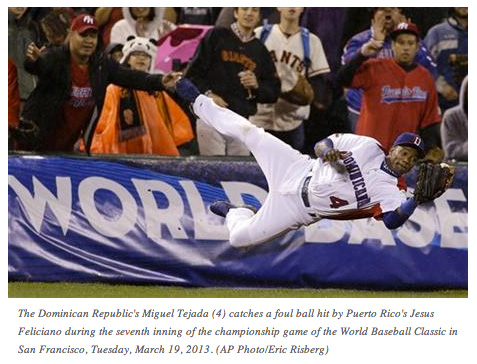 Here’s Tejada (#4) in the infamous pointing photo when the Dominican Republic won the World Baseball Classic: 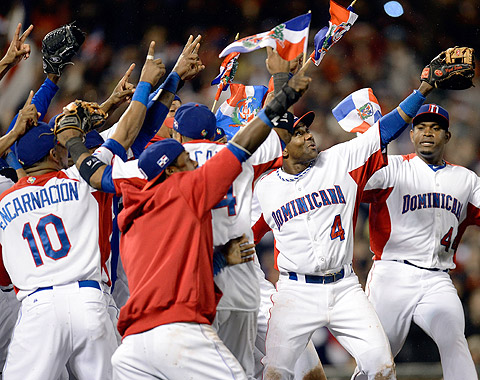 Miguel Tejada did make it into the 2013 Topps Tribute World Baseball Classic set. However, it costs $50 per pack of five cards. (One autographed card or relic card numbered to 99 or less in every pack.)

The Tejada 2009 World Baseball Classic card is available as a jersey card. In fact, Tejada has 171 jersey cards. What if someone bought a ton of jersey cards and then stitched all the swatches together to make an actual jersey?

According to Baseball Reference the most similar player to Tejada is Ryne Sandberg.

So is Miguel Tejada a Hall of Famer?

Interesting to note that Tejada’s errors committed as SS have consistently ranked high.

But his putouts as SS are also quite high.

1 thought on “Miguel Tejada has no 2012 Topps baseball card!”