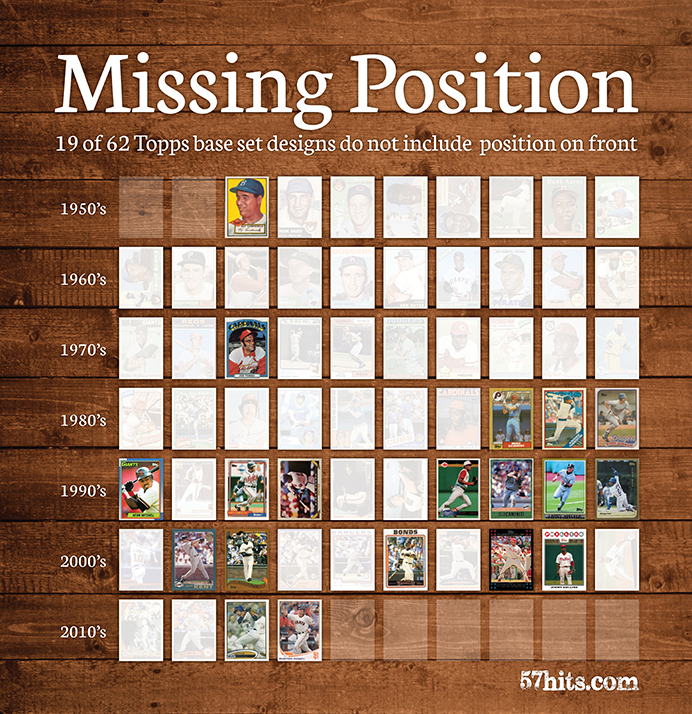 Traditionally, Topps would include the player’s position on the front of the card. For the first 35 years of Topps cards, only two sets didn’t feature the position. 1952 and 1972. For 19 consecutive years Topps placed the position on the front of the card. For some odd reason the 1972 design broke that streak. Perhaps Topps was too distracted that year by their most hideous design ever with the projecting 3D text.

After 1972 Topps returned back to tradition placing the position on the card for 14 straight years, then came the 1987 set. A faux wooden background was featured on the card. I like me some faux-wood. I feature it on my site and in my infographics. However, this year Topps started a trend of forgetting to put the player’s position in the design. Perhaps Topps wanted to make their designs more simple. However, I don’t see what’s so hard about include a simple two-character designation somewhere. It’s really simple. P, 1B, 2B, 3B, SS, OF, or C. Done.

For 35 years nearly 100% of their designs included the position. For the next 27 years, it fell off a cliff down to only one-third. Topps would forget the position 17 times.

Perhaps Topps thinks that fans don’t care what position players play. Or maybe Topps thinks that fans already know all the players. Topps either think fans are too stupid or too smart to care. Today I fall into the “stupid” camp as I barely know any of the players. But many fans, including myself do care. We want to know the positions. I’d say I don’t know baseball players as much today because I don’t collect cards as much as I did in the 80s.

2 thoughts on “Why doesn’t Topps baseball cards list the position?”