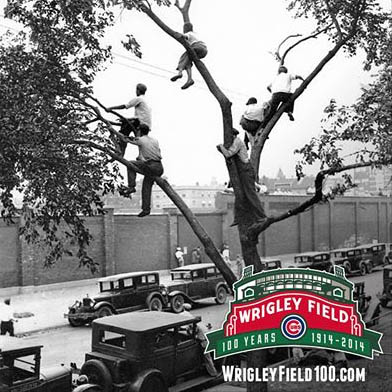 In 1932, Cubs fans didn’t watch games from the rooftops of apartment buildings outside Wrigley Field. Nope, instead people climbed trees to sneak a view of the ball park. Makes you wonder if someone stood at the foot of the tree and charged $250 to climb up and sit for the length of the game. Maybe each branch has an assigned aisle, row, and seat number. Squirrels running up and down the branches serve as vendors tossing peanuts at hungry fans.

The Chicago Cubs finished first in the National League that year, earning them the right to play in the World Series. The Cubs also finished first in attendance, nearly reaching one million visitors with 974,688. It’s no wonder that fans had to climb up in trees to watch the game.

The first National League club to top one million visitors was the 1927 Cubs with 1.1 million fans, thanks to the newly constructed upper deck along the third base line. That was also the first year the park was known as Wrigley Field.

The upper deck was finished for the 1928 season, just in time for their blockbuster year in 1929 where Wrigley Field drew nearly 1.5 million fans–a record that stood for 17 years (mostly due to the upcoming Depression and World War II).

Even though in 1932, attendance records were not broken, Wrigley Field was still the hottest park to catch a game–especially a World Series game. Ahhh, the days of 20s and 30s to be a Cubs fan.

Nowadays, does this particular tree still survive? 82 years later, the tree would certainly be thicker and much bigger. Today’s rooftop owners certainly would not allow such a majestic tree to exist. They would claim it’s obscuring their view.

Perhaps the Ricketts need to start planting some trees just outside Wrigley. Once again squirrels can be employed as peanut vendors!

1 thought on “The original rooftop owners outside Wrigley Field”