If the Cubs play a game 5 in the 2015 National League Championship series against the Mets, I will be at Wrigley Field keeping score with a Palomino Blackwing 602 pencil. 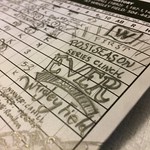 Every great scorecard needs a great pencil–and pencil sharpener. Last week I used a Palomino Blackwing pencil to scorecard the Tuesday’s playoff-clinching game against the Cardinals. It was a historic game with Kyle Schwarber’s homerun that landed ON the scoreboard. I’m so happy to have recorded that game with a historic pencil, the Palomino Blackwing. Many famous people have used this pencil to write stories and draw cartoons.

However, the soft graphite in my Palomino Blackwing pencil (regular, not 602) got really dull towards the end of last Tuesday’s game. Normally I bring a pencil sharpener with me to the game, but with my recent marriage and move, most of my stuff is in storage. I just ordered a fancy pants Palomino pencil sharpener from Amazon Prime. It’s due to arrive on Thursday, just in time for the game!

I’m so stoked about this pencil sharpener, because it has two different blades. The first one is to sharpen the shaft the of the pencil wood, leaving the graphite with a flat end. The second blade is dedicated to sharpening just the graphite. Oh man. Let me tell you.

One of the tricks to keeping a detailed scorecard is to have a sharp pencil. Now not only will I have a historic pencil, but this fantastic pencil sharpener will keep me sharp throughout the game.

Update: I used the Palomino Blackwing #56 pencil for my 2016 World Series scorecards, featured on Chicago Magazine.

1 thought on “Recording scorecards with a Palomino Blackwing pencil”