The Cubs were pretty down throughout game 4 of the NLDS. Despite leading the series 2-1, the Giants and their silly #Believen were about to tie up the series. Giants pitcher some how limited the Cubs to only two hits through eight innings. Things looked bad. But in the 8th inning, I predicted four runs in the 9th!

Everyone on twitters was so NEGATIVE, so I wanted to be positive. This is the 2016 Cubs. They find a way.

In the 8th inning I tweeted:

The Cubs certainly got four runs in the 9th!–just not through a grand slam. This was the largest 9th inning comeback EVER in postseason history. 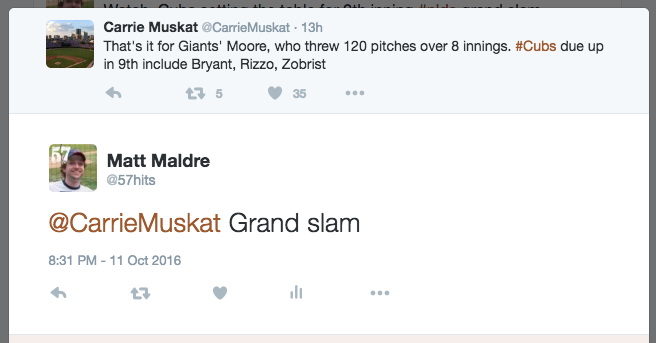 Derrick Law was the first relief pitcher. Before he pitched, I predicted the Cubs would destroy him.

My brother Erik says, “They [Fox Sports] showed way too much of Derek Law in game 3. And then they showed him near the beginning of game 4 and freaked out. Fortunately they didn’t show him again until he was on the mound… giving up a single to Kris Bryant!”

Bryant took Law’s orange hankie and stuffed it down this throat.

Then Rizzo walked to get runners on 1st and 2nd. We need just one more runner to make my grand slam prediction come true!

I was actually shocked that Zobrist got that double. There were runners on 1st and 2nd with a 3-1 count. And here I’m predicting grand slam. So I was expecting a walk from Zobrist. Totally a walk. Zobrist is 5th in the league for walks. If Zobrist walked, the bases would have been loaded. Instead, Zobrist hits a double down the line. The Cubs 9th inning comeback is on!

After Zobrist was going to be Addison Russell. The Cubs manager Joe Maddon initially put Chris Coghlan on the deck circle. The lefty who hit .188 for 2016. YIPES! As my brother Erik points out, “I love how Maddon used punk face [Coghlan] as a pawn. That was great. Get SF manager to pull his closer with a lame lefty, then pull Contreras out his pocket to face a lesser pitcher.”

Contreras got the RBI single to tie up the game. And then my favorite Cub, Javier Baez got the go-ahead RBI single. OH YEAH!

The top half of the inning ended with David Ross grounding into a double-play. The Cubs now have a one run lead going into the bottom of the ninth. Yet, Cubs fans were still being negative and full of worry. Ridiculous. Cubs fans, what happened to us? We are fans of optimism. We aren’t fans of negativity. We are positive. Yes, we’ve been burned by our team in the past, but we are a positive fan group. Let’s start acting like it on Twitter. 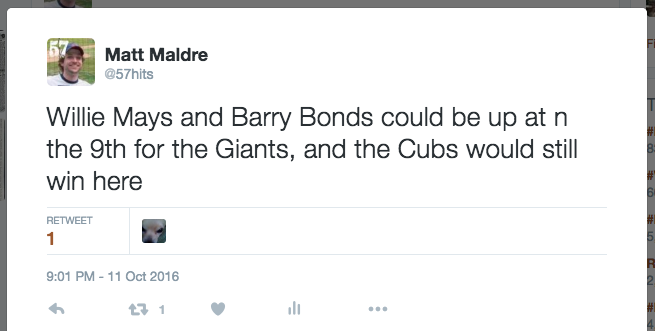 And of course, Chapman shut out the Giants in a 1-2-3 9th. Cubs advance to the National League Championship Series!

For the entire game, my five-month daughter was fast asleep while we played the game quietly on the tv right outside her nursery. However, she woke up and was crying just before the 9th inning. I told my wife that she just wanted to watch the Cubs win.