The Rizzo “RESPECT ME” game. The Cubs are trying to advance to the league championship series. The Nationals stand in their way. With the series tied 1-1, Rizzo hits the game-winning hit in the 8th inning. He yells out RESPECT ME! RESPECT ME!

I had the honor of attending this game in person, so of course I kept a scorecard. I’m still adding flourishes to the scorecard, so I’ll update this blog post as I make progress. 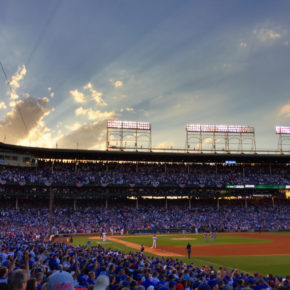 Game 3 of the NLDS is the Cubs first postseason game at Wrigley in 2017. That means the first postseason game at Wrigley since the World Series last year! The weather was great. Here’s a nice shot of Wrigley with sunrays beaming behind the park. This was taken just after the Cubs tied the score 1-1 with Albert Almora Jr driving in Ben Zobrist. We really needed that run, because the Cubs were being no-hit through six innings!

The start of adding the first drawing

After the game, I love adding extra details and drawings to my scorecard. This summer my wife and I bought a new house in Glen Ellyn. Now I have a 40-minute train commute into downtown Chicago every day. This gives me plenty of time to work on adding flourishes to my scorecard! Here’s the scorecard sitting on the Metra seat as the train pulled into the Ogilvie Transportation Center downtown. 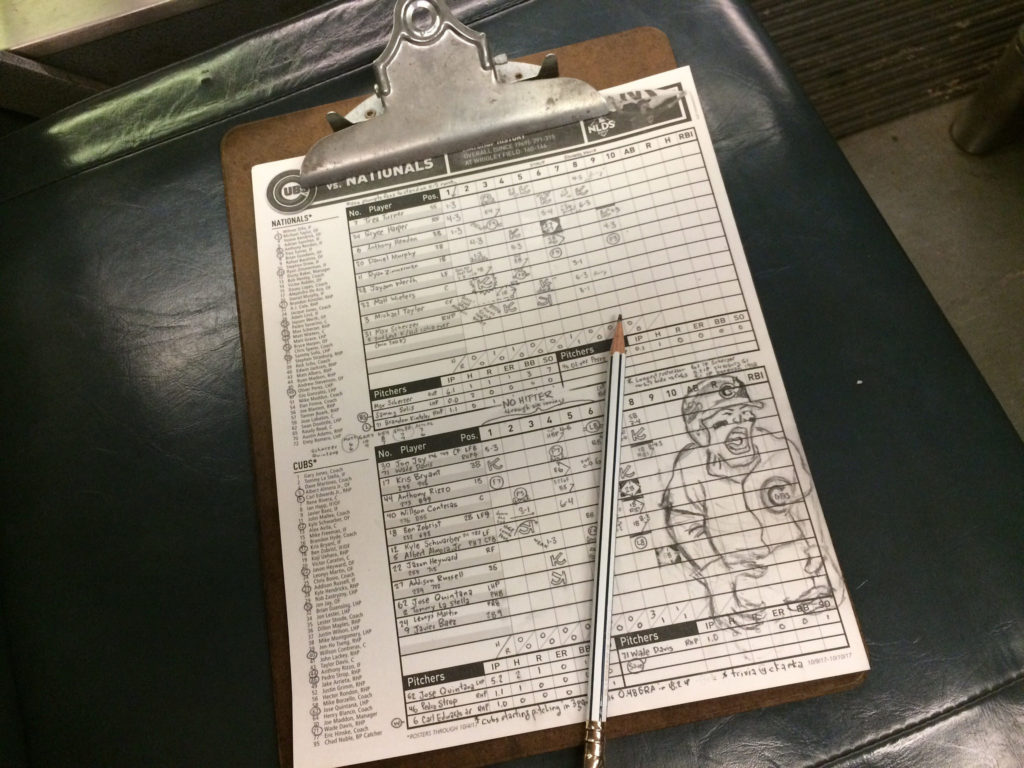 The beginning sketch of Anthony Rizzo is taking shape in the bottom right half of the scorecard. Rizzo was so upset as he was screaming “RESPECT ME! RESPECT ME!” that I wanted to draw him like he was the Incredible Hulk. In fact, I searched Google images for: Incredible Hulk Angry for inspiration. 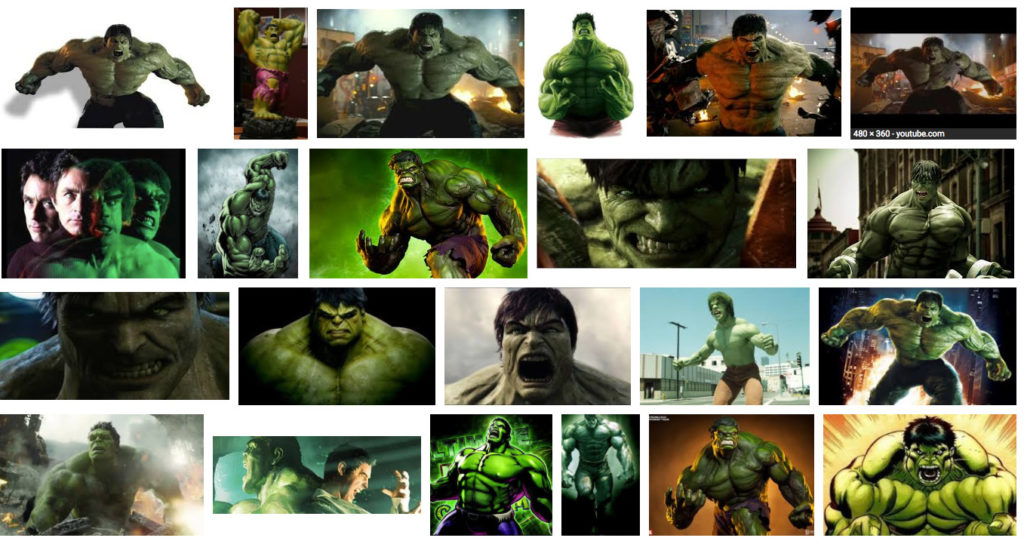 The hunched-over back and giant expressive hands appealed to me the most. So Rizzo gets those traits in this drawing. 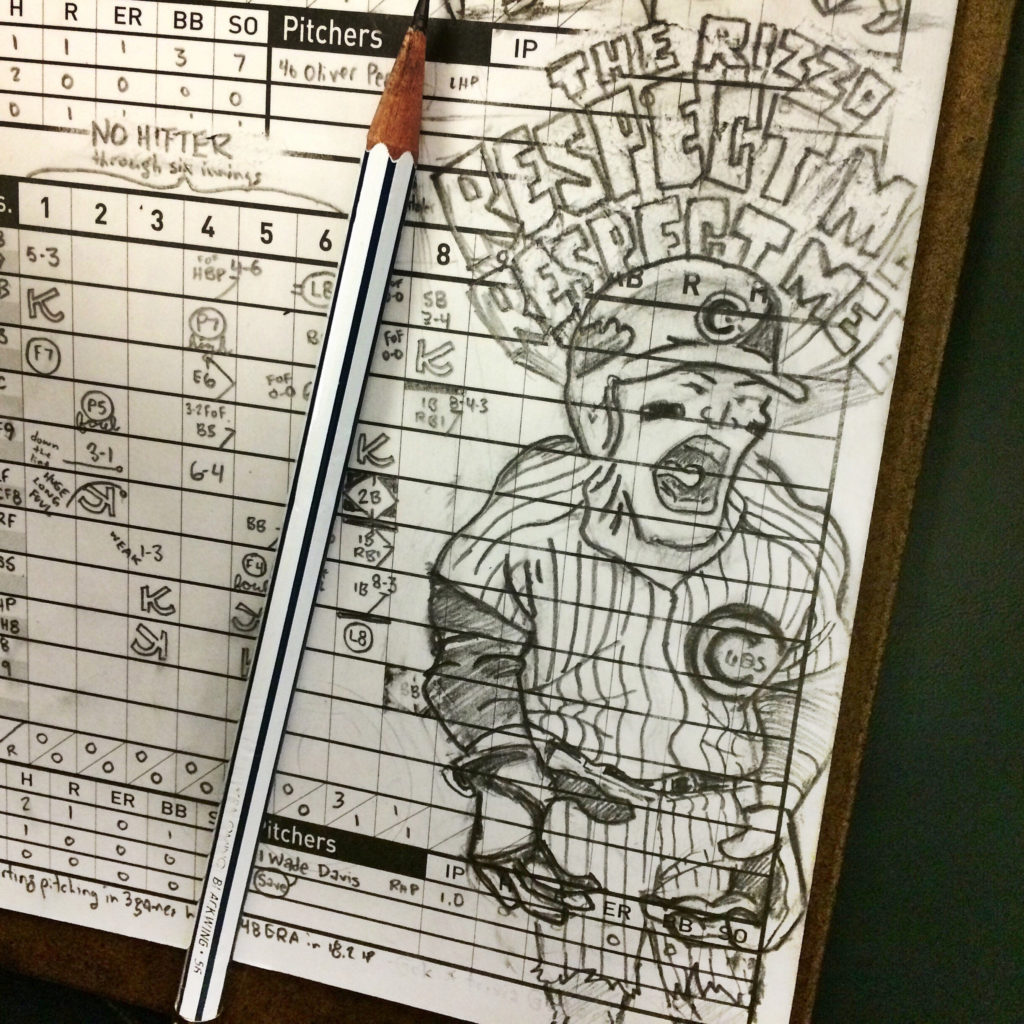 Some more details added into Rizzo along with the words at the top. “RESPECT ME! RESPECT MEE!” are drawn in the style of the Incredible Hulk title font on the comic book covers.

Rizzo yelling out “Respect me!” was a very odd sequence to me. He bloops a ball into the outfield. Three Nationals players can’t decide who wants to catch the ball, so it drops between all three players. Leonys Martin scores from second base. Cubs are ahead 2-1. But as this play continues on after Martin scores, Rizzo decides to try to turn his single into a double. He gets tagged out very easily halfway between first and second base. In fact, Rizzo didn’t even really try to make this into a run-down. He just stood there and allowed the first basemen Zimmerman to tag him.

Initially Rizzo looked all forlorn when he got tagged out trying to go to second. He kinda shuffled along the infield. Then he started yelling. At the time, I was at Wrigley Field, so I couldn’t hear what Rizzo was yelling. It seemed he realized, “oh i can’t mope, i have to be all energetic,” so he started to yell to show his teammates that he’s all jazzed up and positive about the go-ahead run. YEAHHHH! GO-AHEAD RUN!

But then I saw later on TV what Rizzo was yelling. RESPECT ME! RESPECT ME! So he wants them to respect him, because they didn’t walk him to fill first base. Well, isn’t that a slap to Contreras? Plus, it wasn’t a great hit. it was a bloop hit. Rizzo didn’t win the game as much as the Nationals lost it. Ah well.

This bloop hit needs be on the scorecard too. Right on top of Rizzo I drew left fielder Jason Werth, shortstop Trea Turner, and center fielder Michael Taylor. Having access to the “condensed game” archives on mlb.tv is so incredibly handy. I can take screenshots of the game at the precise moment. 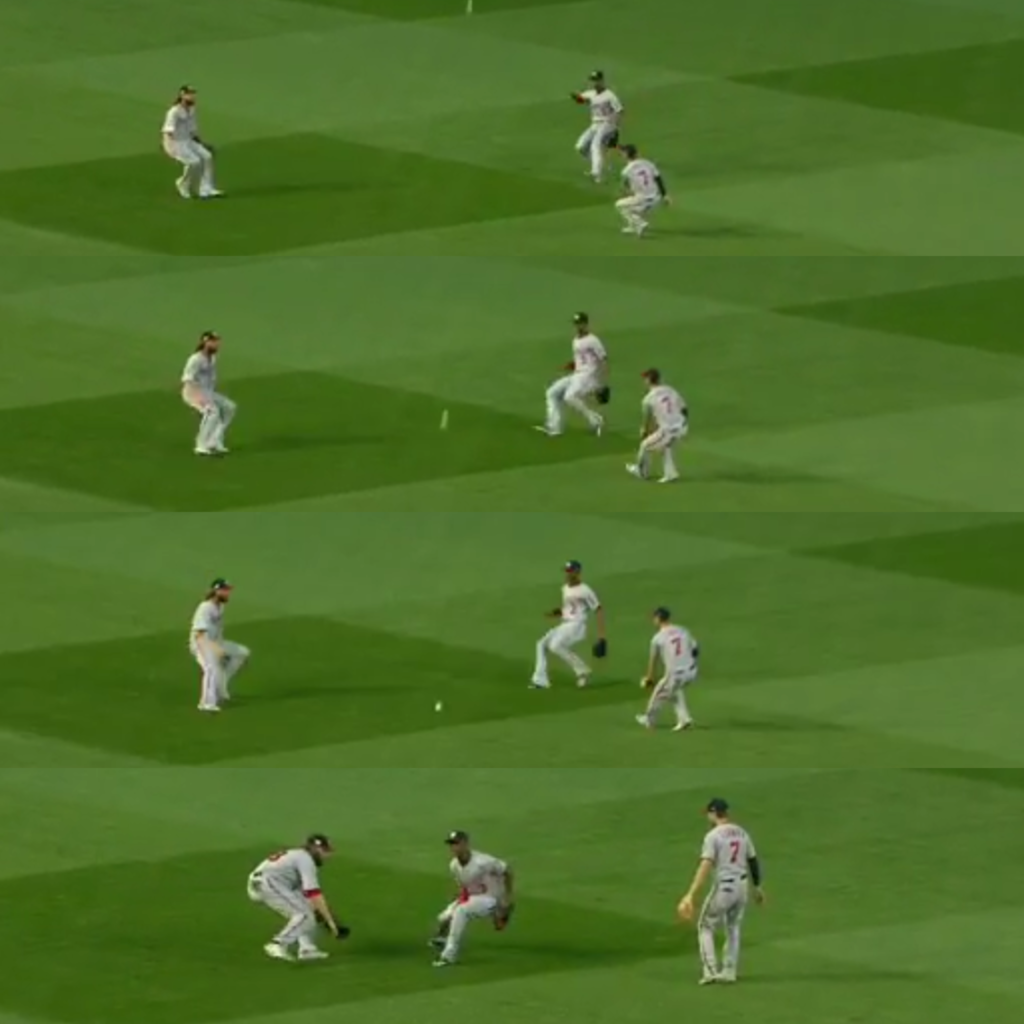 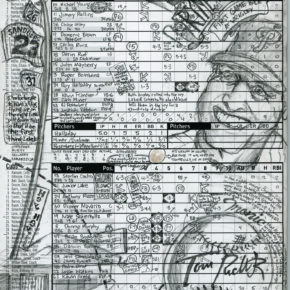 I especially like how the game score is at the very top of this ball drop. I used this technique on the 2013 game where Ryne Sandberg returned to Wrigley Field for the first time as a manager. That 2013 scorecard is one of my best scorecards in terms of design/layout. It has some great prominent features, nice flow.

With this NLDS game 3 scorecard, the final score of 2-1 is tied into the bloop hit, landing on top of Rizzo’s hulk-like reaction. The sequence falls into place nicely.

Now for some more little details. In the 8th inning Carl Edwards, Jr also was totally amped up. In previous games of this series, Edwards has had some pitching problems letting in a bunch of runs. When he threw a 1-2-3 inning, he was so excited that he did a triple-fist pump walking back to the dugout. Edwards is so skinny, it’s funny when he gets all amped up. His limps are like tree twigs moving around. 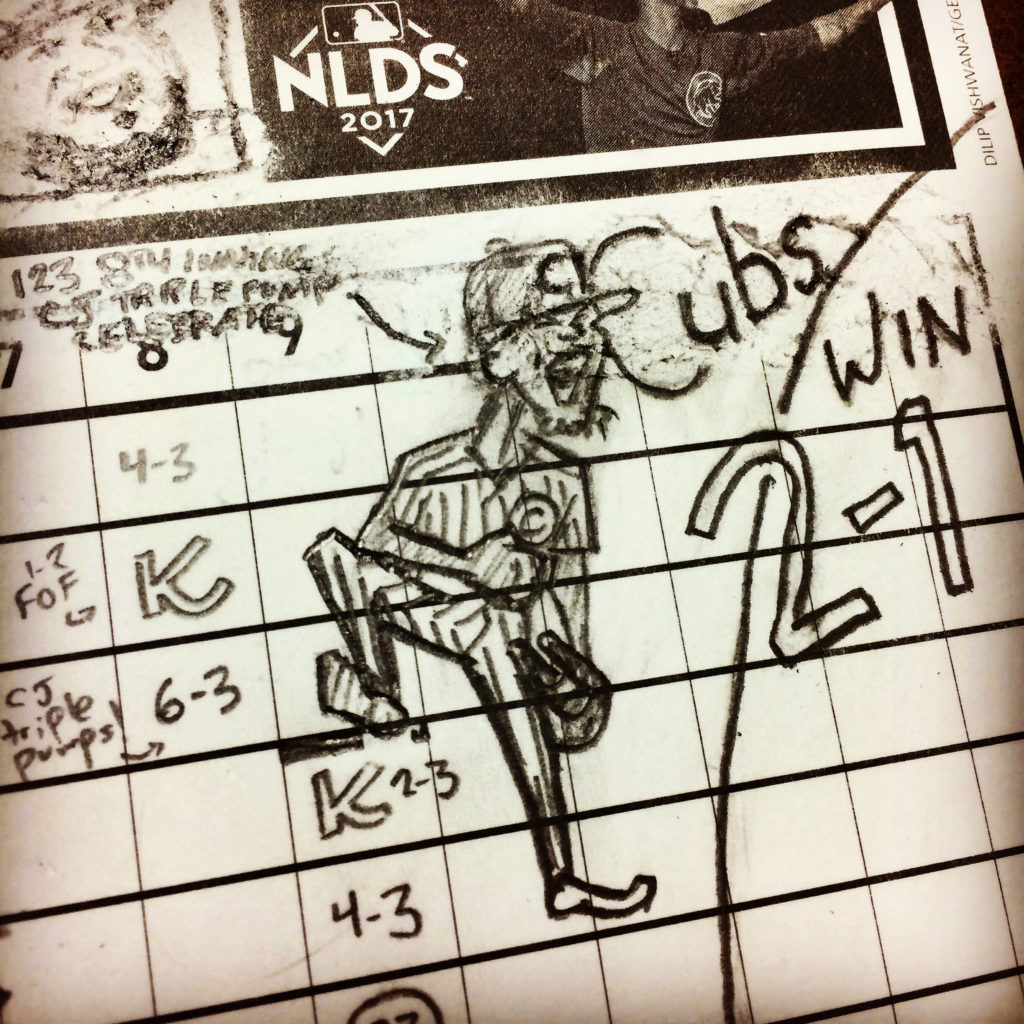 My daughter’s appearance in the scorecard

MORE COMING SOON! Next I’m adding a comic strip about my Yoda Cubs tshirt, and my 17-month-old daughter’s reaction! 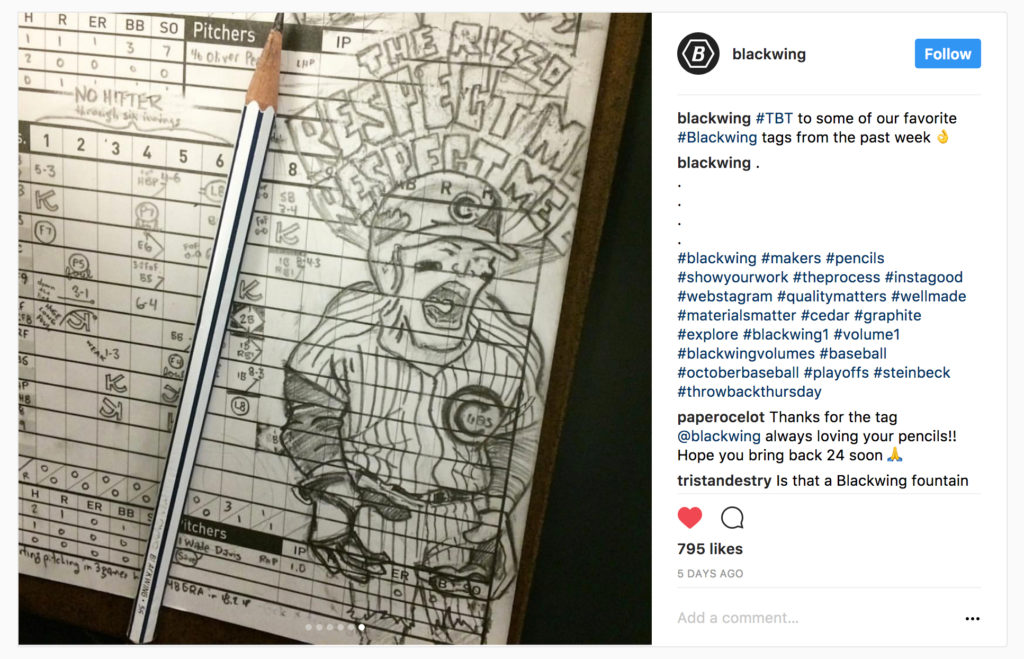