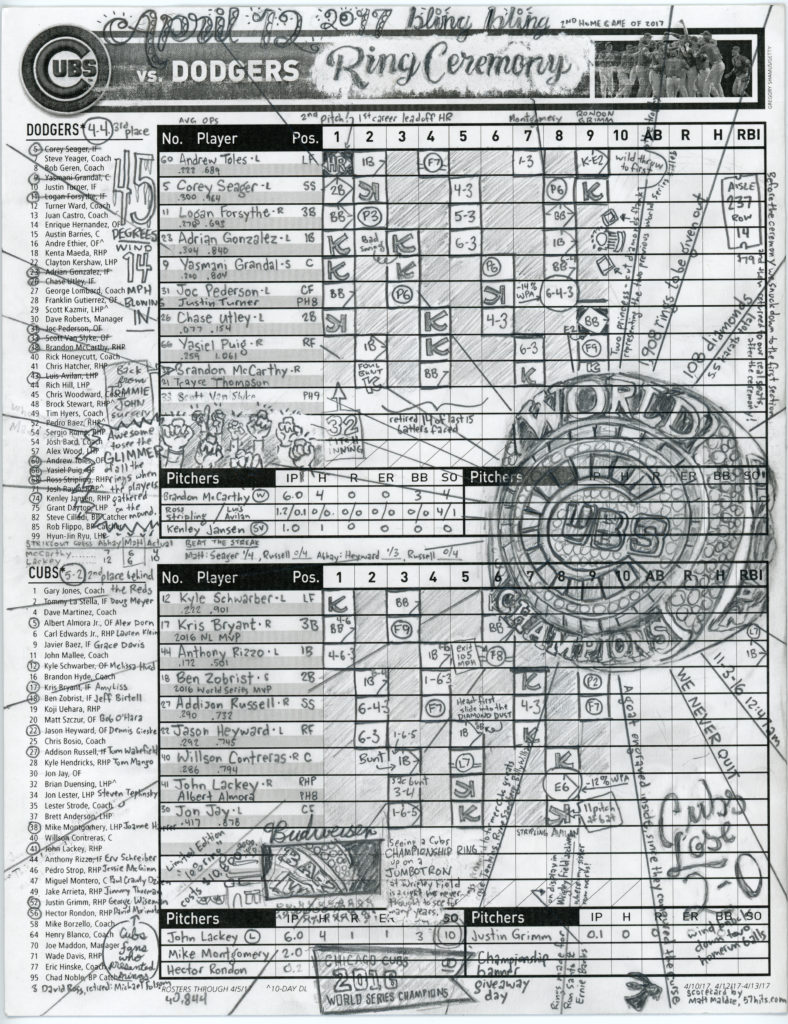 Before the game starts, if you walk down to the first section with a hot dog in your hands, they will let you sit with no questions.

The glimmer of the Cubs rings was incredible as all the Cubs gathered on the mound and raised their hands.

Seeing Cubs World Champion rings on a jumbotron at Wrigley Field is a sight I thought I’d never see.

What excitement! The Cubs are getting their World Series champion rings! These rings really do exist! 2016 was an amazing year. Being able to see in person the Cubs receive their rings was a great honor.

My friend Abhay secured two tickets to this precious game. We made sure to get to the ballpark early, because they were also giving away 2016 World Series Champion replica banners! The banners were pretty slick. A good size at 4.5ft x 2.5ft. Neither of us opened up the bag containing the banner, because we both wanted to keep ours in good condition. Although these would have been fun to wave around like rally towels. A really BIG rally towel. 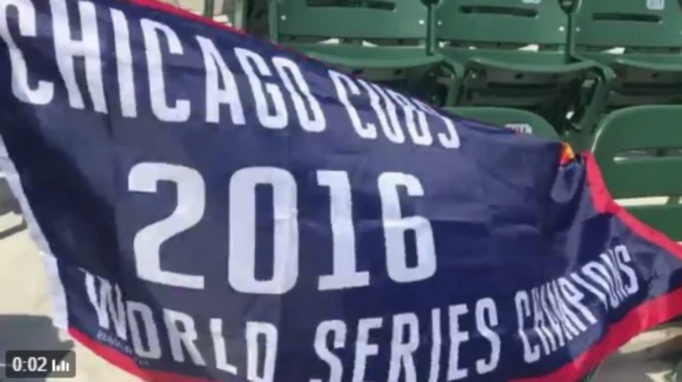 Hot dogs will get you incredible seats 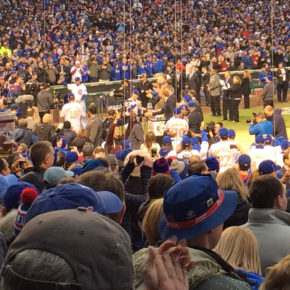 Since we got to the ballpark early we grabbed a couple hot dogs and wanted to scope out the setup for the ring ceremony. We walked down to the first section behind home plate. The usher didn’t ask us for our tickets, I’m guessing because we had hot dogs in our hands. Normally when people try to sneak into this section, they’ll have a camera in their hands, or maybe a sharpie and a baseball. But food? “Yeah, you belong here. Go ahead.” There were plenty of empty seats available since it was a good amount of time before the ceremony started, so we simply sat down.

And guess what? The people who had these seats didn’t arrive until halfway through the ceremony! So we got to sit there most of the time! When they did arrive, we quickly scurried out of the row, and into another row with empty seats! We sat there for the rest of the ceremony—all super-close to the action! It was incredible.

Design of the rings

Nobody knew what the rings would look like, so this would be the big unveiling. Really, they did a great job with the rings. Trivia about the rings at the bottom of this post. We’ve all heard the basic stats. 1,908 rings made, 108 diamonds, etc.

As each Cubs player was announced, a Cubs fan delivered his ring. A nice touch. (Do other teams do this?) I wrote down the fan’s name by each player in the roster on my scorecard.

Rings for Santo and Banks

Every Cubs fan heart was touched when they announced that rings were made for passed-away Ernie Banks and Ron Santo. Two former Cubs that epitomized what Cubbiness is about. Two Cubs that go so close to the World Series, but never got to experience it. Now they each have a ring! The exact words spoken at the ceremony:

Now I am sure Ron Santo and Ernie Banks are looking down right and smiling as they see all these people putting on their rings. In fact, rings for Ronnie for Ernie have been made. They will be on display in the Wrigley Field Archives as a tribute to two men who dedicated their careers and their lives to the Cubs organization and to you fans.

My favorite part of the ceremony is when all the players gathered on the pitchers mound for a group photo. All the players raised their hands in the air with their new jewelry bedazzling their hands. The sun caught their rings in just the right angle, because I swear I saw a bunch of glimmering above the Cubs.

As soon as the ceremony ended, we booked outta these great seats to our actual seats in right field. As we walked up the aisle, the Cubs ring video played on the right field LED display again.

Looking up at the Jumbotron seeing a giant Cubs ring was an amazing sight to see at Wrigley Field.
1) A jumbotron at Wrigley, who would have thought that?—even just ten years ago?
2) World Series champion rings. It felt like a movie. 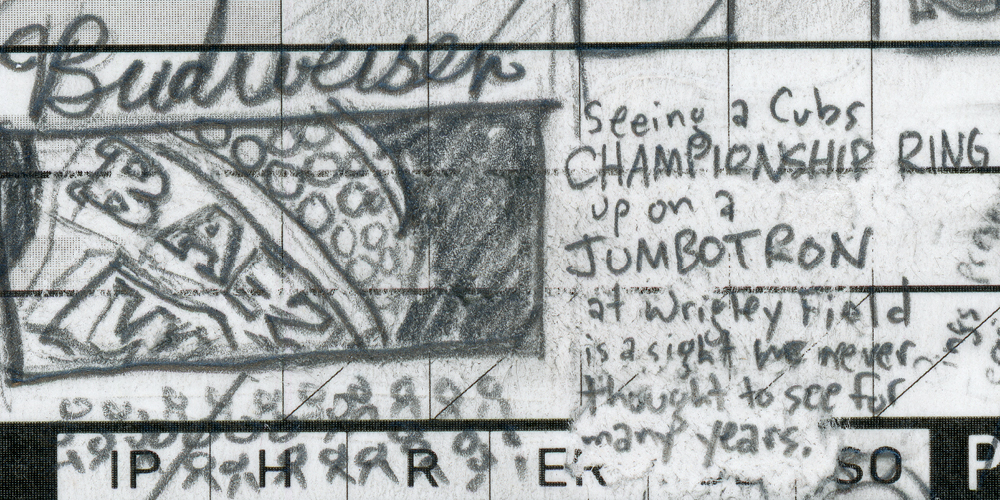 With the rings in the players’ possession, we now have a ballgame to play! This was the second home game of the season. (The first home game the players raised the Championship banner on the old scoreboard). The Cubs faced their NLCS opponent, the Dodgers. In fact, the Dodgers had to endure this very long ring ceremony. Talk about rubbing it in their face! Here, watch us celebrate the championship you didn’t get.

We all know how this plays out at the end of the 2017 season. The Cubs and Dodgers had a rematch in the 2017 NLCS. The Dodgers beat the Cubs 4 games to 1. The Cubs lost so bad, that out of the 25 postseason series the Cubs have played in, this was one of their worst all time. But this is a great Dodgers team with 104 wins.

The Dodgers kinda sucked at the start of the season

Hard to believe when the Cubs played them at the start of the season, the Dodgers were in 3rd place with a 4-4 record. The Cubs held a 5-2 record, worth for 2nd place behind the Reds. The Reds? They ended up with 94 losses, 24 games behind the Cubs. 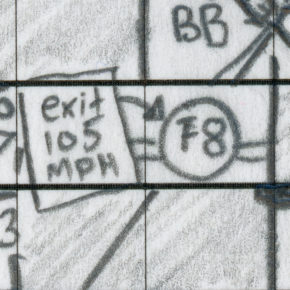 This particular game at the start of the season was a precursor for the NLCS after the season. The Cubs were held to five hits with zero runs. The Cubs came close a couple times, but the wind blocked down two potential home runs, including a 105mph exit velocity fly ball by Rizzo.

John Lackey had a 32-pitch first inning, including a leadoff home run by Andrew Toles. Those Dodgers were wearing down pitchers, even at the start of the season. These sort of dogged at bats wore down the Cubs starters in the 2017 NLCS.

Trivia about the rings included on the scorecard

My first scorecard since the World Series

For the 2016 World Series, Chicago Magazine commissioned me to create a scorecard for every game. That officially made me a professional scorecard keeper! All those World Series scorecards were created while at home in Oak Park, watching the game on TV. Now, I’m at Wrigley Field as “the guy who made the scorecards seen by thousands of Chicagoans.”

Admittedly, I felt a little bit of pressure in creating this scorecard—especially since it was a significant event in Cubs history. That may be part of the reason why I delayed finishing it until after the 2017 postseason.

I also had a couple large life event happen, like buying a house, moving, taking care of a mobile one-year-old… which are all joys. I wanted to focus my summer on those joys. The scorecards would come in time.

I created the World Series scorecards at home, so I was able to work on a larger format scorecard, sized at 11×14. The larger size enabled me to record more detail, and make my writing overall more clean.

Working on a real scorecard is 8.5×11 inches, considerably smaller. The larger World Series scorecards gave me the ability to add much more detail—and I loved this capability. Now with a smaller, regular-sized scorecards in my hands, the challenge of keeping all these beloved details is indeed tricky.

Therefore, this scorecard is a bit messier than the World Series ones. Throughout the year, I had the priviledge of attending several more games in person, so I kept a few more regular-sized scorecards. You’ll see those posted soon! I think I did a better job with the details on those. I’m really itching to work on a bigger size. I’m even envisioning working a large poster-size. What could I do with a 22-inch by 34-inch paper?

Also, it was a very cold day at the park. 45 degrees with a 14 MPH wind. I wore my gloves to keep score. For fun, here’s a pic of me keeping score with my gloves. 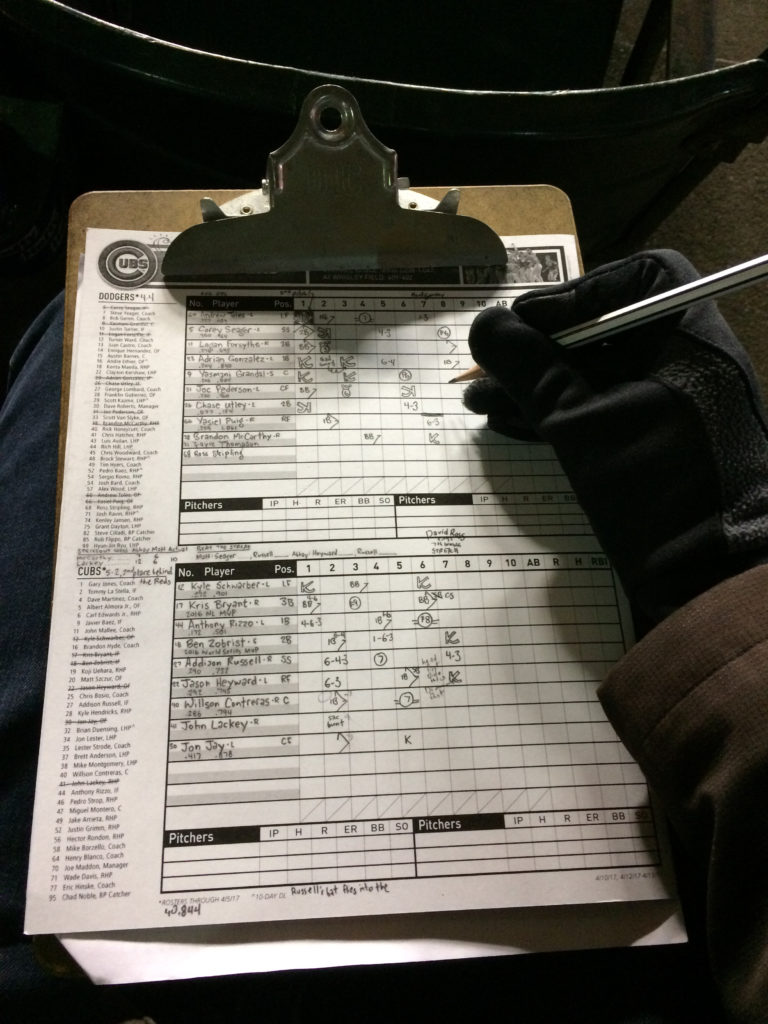 Does that make my gloves kinda like batting gloves? These are scorecarding gloves. Don’t let that pencil slip out of your hands!